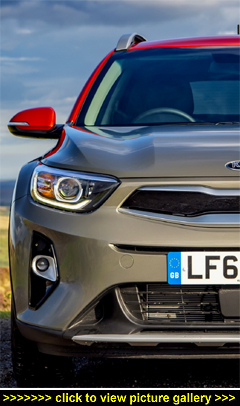 “You could say it’s raining SUVs
and crossovers; every month another
one hits the market, with supermini-
sized compacts (B-SUVs) being the
most favoured in the rapidly growing
(expected to double to 2.2 million a
year in Europe by 2020) subcompact
crossover/SUV market...”

INTO THE FRAY, fresh from Kia, comes their all-new Stonic. Priced from Ł16K to Ł20K, you can choose between three powerplants — 1.0-litre 118bhp three-cylinder petrol, 1.4 98bhp petrol, and 108bhp 1.6-litre turbodiesel. Expected to show the biggest take-up is the 1.0-litre turboed direct injection T-GDi in '2' trim (the only other trim option is the range-topping First Edition) which can be driven away from your nearest Kia dealer for Ł17K (and with a fiver's change!) — and that's the one we've been testing this week.

Measuring a tad over four metres (4,140mm) from its distinctive Kia family 'tiger-nose' to its short overhang tail, it sits astride the blacktop with an unambiguous SUV stance. SUV-style body cladding runs protectively from the front bumper to the back in an unbroken line, including around the wheel arches; skidplates do the same job front and rear.

Emphasising the Stonic's shapely but short rear overhang is a distinctive wraparound C-pillar that's an eye-catching feature in itself, and overall the styling presents a polished but rugged go-anywhere image. Adding extra pizzazz is a range of eye-catching paint colours such as a fabulously flirty Zest Yellow.

On first acquaintance the Stonic delivers on that promised elevated driving position. The high-set, nicely-bolstered seats are comfortable and upholstered in all-season-suitable cloth with lighter striped centre panels. The driver benefits from a height-adjustable seat which in turn ensures all-round A1 visibility with the bonnet sides and edges in clear view.

A grippy, satin black leather steering wheel rim makes driving duties even more agreeable while keeping it all laid-back on longer trips is a nicely-inclined left-foot rest. Also appreciated is the amount of headroom wherever you sit; good, too, is cabin width — it feels much wider inside than you might have been expecting in this class, so thankfully there's no elbow fencing with your front passenger in a Stonic!

As well as accommodating four adults without any fuss the cabin is 'stuff-friendly' with biggish bottle-holding door bins, a deep two-tier tray ahead of the gearlever (with the essential AUX and USB ports and 12v power feed), cupholders, and a usable glovebox.

The AirCon does a good quick 'hot' on chilly days and fans of the fast-disappearing manual handbrake will be delighted to spot one alongside their left thigh. The cabin ambiance is light and welcoming with a logically arranged dash; the touchscreen's graphics are clear and the menus intuitive plus there are handy 'jump' buttons to take you directly into the main features.

Best of all is the quiet. Pootling or cruising, the engine note is quick to fade to a murmur and the cabin remains agreeably noise-free (apart from what you generate yourself); you're only really aware of the three-pot if you work it hard, in which case you'll hear its companionable thrummy growl — as any keen driver would want to.

It may be the 'starter' model but even '2' spec Stonics come with a fair bit of kit. In addition to all that mentioned elsewhere there are four electric windows (one-shot for the driver), AirCon, rear parking sensors, powerfolding heated door mirrors, digital 3.5-inch driver's trip computer between the main dials (with a road speed readout), Bluetooth with music streaming, a six-speaker audio system, auto lights, bi-function projection headlamps with cornering lights and LED daytime running lights, roof rails, and 17-inch alloys wearing 205/55 Continental rubber.

The optional Advanced Driving Assistance pack adds Autonomous Emergency Braking (with pedestrian detection), Lane Departure Warning, a driver alert assist that suggests when it's time to 'take a break', and High-Beam Assist that automatically switches between main and dipped beam — all that for just Ł350 sounds a good deal to us.

Kia finished joint-first in the 2017 JD Power UK Vehicle Dependability Study so no worries about reliability and, of course, you're also covered by Kia's seven year/100,000-mile warranty which, as well as beating hands-down that from any other manufacturer, is transferable to subsequent owners.

Despite the flamboyant off-roader presence, and with a strong nod to market demand (all-wheel drive models account for less than eight per cent of B-SUV sales), all Stonics have just two driven wheels which is no handicap as they're easy and enjoyable to drive — certainly one of the better handling small SUVs.

While it's no hot hatch the Stonic rides firmly — informatively so — but then you do benefit from well-managed body control. The steering is precise and up to speed with the chassis, making the Stonic feel light on its feet and easy to place accurately on the road. As mentioned earlier, it also comes with torque vectoring which brakes an inner wheel to keeps things focused mid-bend and around corners.

The 1.0-litre T-GDi (Turbocharged Gasoline Direct-injection) engine punches out 118bhp backed by 126lb ft of torque that's on call across a wide rev-band from 1,500 to 4,000rpm — which translates into decent low- to mid-range acceleration with 0-60mph taking 9.9 seconds.

Keeping the perky three-pot in the zone by making best use of the gears is easy as the six-speed stick-shift comes with a positive change-action. For those who like their shifting done for them, a seven-speed DCT twin-clutch autobox will be available with the 118bhp petrol engine this summer.

Maxed out, the T-GDi can take the Stonic to 115mph. A more interesting figure for most owners will be the real-world mpg — a week's hard driving saw us record 46.1mpg on a mix of roads so we'd be surprised if most owners don't see 50+ (officially, 56.5mpg is the number). ISG, Kia's engine stop-start system, is fitted not just to maximise fuel efficiency but also to ensure no CO2 emissions are generated while you're waiting in traffic.

Android Auto and Apple CarPlay smartphone integration comes as standard on every model and the grade '2' spec includes a 7-inch touchscreen display — set at the same height as the main dials so switching glances can be done with minimum distraction — with a DAB radio and MP3 compatibility plus Bluetooth with voice recognition and music streaming.

In First Edition trim this is upgraded to a 7-inch touchscreen full navigation and infotainment system featuring Kia Connected Services with TomTom, but while the '2'-grader doesn't get it that's not a problem because using the built-in Android Auto or Apple CarPlay you can access your smartphone's guidance features to direct you to your destination.

Getting in and out of the rear cabin calls for little physical effort, and once you're in and settled back in the comfy seat it's a relaxing place to be.

Large side windows let in plenty of light and give you a clear view of the world passing by plus there's good knee and foot room and enough legroom to accommodate one six-footer behind another.

The outer armrests are big enough to relax your elbows on, and you can store your drink in the bottle-holding door bin. There's a seatback magazine pouch and if you don't mind sharing, a third passenger can use the middle slot — and not at the cost of you getting squeezed.

Access to the Stonic's clean-sided boot is easy thanks to a high-rising tailgate. The contents are covered by a lift-up parcel-shelf (much less fuss than a roller blind, and easier to remove and stow). With the 60:40-split rear backrests folded flat there's a very practical 1,155 litres for cargo and even if the back seats are occupied you'll still have 352 litres for cases (or even a baby buggy). Additionally, you can carry up to 70kg on the roof bars or tow a braked 1,110kg. You decide!

For the record, top-spec First Edition models come with a two-level boot floor which offers a deeper boot or, set in its upper position, a hidden 'mezzanine' for storing valuables. At its top setting it creates a continuous flat floor when the rear seats are folded for loadbay duty. Worth considering.

Kia has priced the very likeable Stonic competitively against its rivals and boosted its appeal with a palette of smart colours, including two-tone paint combos with eye-catching contrasting roofs. An easy to drive compact SUV with plenty of 'thumbs up' appeal — another sales hit in the making for Kia! ~ MotorBar