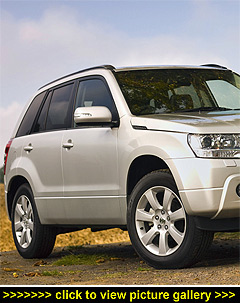 “Four-by-four? Sell me more, sell me
more. Summer Nights are a long
time ago; now we need to drive in
the snow... Don’t worry if you don’t
know the tune (from Grease); all you
really need to know is that Suzuki’s
Grant Vitara is all you really need
to beat the Arctic weather...”

THE ARCTIC WEATHER already experienced this month and, indeed, the last two winters of chaotic snow-covered roads, has given the 4x4 market a real boost in sales. Multi-purpose (4x4) new vehicles sales are one of only two sectors showing growth in 2010 — MPVs (people carriers) being the other one.

Manufacturers are also saying enquiries and sales of 4x4s are strong and car auction companies are reporting high demand for used 4x4s. Land Rover UK sales are up 30 per cent, Audi has six-month waiting lists for Q5 and Q7 models and BMW cannot get enough X models — not surprisingly, 4x4 shortages are commonplace.

I've just being getting to grips — literally — with the latest Suzuki Grand Vitara range, in particular their flagship five-door SZ5 model powered by a petrol 2.4-litre engine with manual transmission and priced at Ł20,920 (or, should you prefer, with an auto gearbox for Ł21,995). Note that all Grand Vitara versions offer proper 4x4 traction as standard.

Grand Vitara three-door prices start at Ł15,725 for the 1.6-litre petrol SZ3 and the range tops out at Ł23,250 for the 1.9-litre DDiS diesel manual five-door in SZ5 specification. These are new prices with the 20 per cent level of VAT which starts in January 2011 (Happy New Year!). There are three levels of trim and equipment — SZ3, SZ4 and SZ5 — depending on which one of the three engine options is chosen. Three- and five-door models are now both labelled Grand Vitara.

They are all genuine go-anywhere 4x4s with a monocoque body incorporating a ladder-frame chassis so they are tough, rugged and built to last. Vitaras can cope with most types of driving requirements from the on-road commute through ice, snow and mud and more adventurous off-road mud-plugging. A genuine 4x4 for all seasons.

With a body length of 3,865mm for the three-door and 4,340mm for five-door versions, the Grand Vitara takes up no more road space than a family hatchback so the Chelsea Tractor image does not apply. Five-door versions have seating for four/five and with all the seats in use there's 398 litres of boot space. Fold down the rear seats and this increases to a useful 1,386 litres. Towing weights (braked) range from 1,600kg up to 2,000kg with the 2.4-litre petrol five-door models able to tow 1,850kg.

In July 2010 it received minor design changes to the rear and a more elegant and city-friendly appearance with the removal of the rear-mounted spare wheel. This has resulted in a lighter to operate rear door and a 200mm reduction in overall vehicle length. A puncture repair system and tyre inflation device is now used across the Grand Vitara model range — not a great feature for me because I like having a spare wheel even if it is a 'skinny'.

The Grand Vitara also gained other refinements to its exterior styling including a new 'Suzuki face' front grille and a front bumper which gives a more sculpted and muscular appearance. Smart new door mirrors with integrated turn indicators also feature.

Commendably, all models now have ESP (Electronic Stability Programme) as standard. New wheel designs are utilised with five-spoke 16-inch alloys for the SZ3, 17-inch alloys on the SZ4 model and 18-inch rims for the five-door SZ5.

Cabin ambience is now more refined and sophisticated, with a cleaner but bland, easier to monitor dashboard layout and new control buttons.

Other improvements include a new multi-information display in the main instrument cluster that shows vehicle status data such as fuel consumption, mileage, driving range and the selected gear for automatic transmission models. Steering wheel-mounted switches are illuminated for greater ease of use, and there is a new control panel for the climate control unit.

SZ5 five-door models feature wood trim inlays to the centre console and integrated door armrests which help 'lift' the cabin quality, along with a centre speaker on the dashboard — this allows sound to be echoed off the roof to create a surround-sound effect.

All models have electrically-operated windows (front on SZ3 and front and rear on SZ4/5), electrically-operated and heated door mirrors, air conditioning, stereo radio/CD system, front, side and curtain airbags, remote central locking and leather upholstery with heated front seats for the SZ5 versions.

But it is the Grand Vitara's all-wheel drive system that impresses the most. Just how many customers who have bought two-wheel drive SUVs or front-wheel drive new-generation 'crossovers' following the early winter snow and ice now wish they'd chosen 4x4 versions? Lots, I suspect.

The Vitara's four-wheel drive system is permanently engaged and it provides sure-footed progress at all times, ensuring secure performance in low-grip conditions. And the driver doesn't have to worry about switching it in or out every time the surface changes.

Unlike systems that operate predominantly in two-wheel drive and automatically engage four-wheel drive via a centre clutch when differences in front and rear wheel speeds are detected, there is no delay in the Grand Vitara's system: four-wheel drive is doing its work all the time, just like in the big heavyweight 4x4s.

Next is 4H Lock. In this high-range 4x4 mode a clutch locks the centre differential to eliminate any speed difference between the front and rear wheels, providing traction to power through deep snow or mud. Finally, 4L provides four-wheel drive (again with a locked centre differential) and enables Grand Vitara to cope with more challenging conditions. 4L's transfer gear ratio is about twice that of the 4H Lock, so offers excellent low-end traction. There's also a Neutral mode which allows the vehicle to be towed — with the centre differential free, there is less risk of driveline wear and tear.

However, the 2.4-litre, four-cylinder petrol engine is not quite so impressive. It might be the latest Suzuki unit with built-in refinements such as balancer shafts and a durable timing chain but it lacks the power and torque. Okay, it's a compliant engine but there are better ones now on the market.

Top speed is 115mph and zero to 62mph takes 11.7 seconds. In reality this engine is not the best choice; the 1.9-litre turbodiesel will be more economical but it's slower and costs more to buy so get out your calculator. In the longer term, anyone covering 10,000 miles a year will be better off buying the diesel version. As far as the 2.4 model goes, you also get a firm and unsettled ride, a lack-lustre and relatively large petrol engine, heavy gearchange, no spare wheel and high running costs.

The up-side is that the Grand Vitara is rugged, tough and durable, affordable to buy, roomy, stylish and well equipped with good handling. It's also a genuine 4x4 with go-anywhere traction and when the roads are white, that counts for a great deal! — David Miles