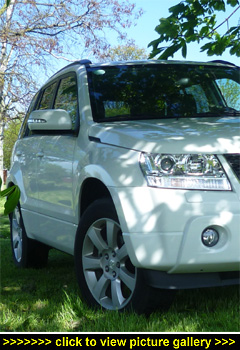 “It’s not just snow and ice that’s
easier to overcome if you’re driving
a SUV but also, as this sodden
Spring has brought home, heavy
rain — swamped roads can be just
as treacherous as those blanketed
with snow...”

SITTING HIGH WITH A COMMANDING VIEW of the road, able to fearlessly wade mini-lakes on back roads and getting the least of the blinding spray on rain-soaked motorways, it's obvious that whatever the weather is throwing in your path, behind a 4x4's steering wheel is a very good place to be.

Lumbering great off-roaders will do the job, of course, but their size works against them almost anywhere else apart from off-road. In town, things go from bad to worse. And that's when you're not frequently stopping to re-fuel.

All of which explains the popularity of compact, city-friendly SUVs that make a good fist of providing on-road comfort allied to proper off-road ability... SUVs such as Suzuki's Grand Vitara, which we've just given a thorough soaking.

Recently re-vitara-ised (sorry, revitalised), the 'Grand' is something of a smoothie on the outside, with streamlined — verging on chiselled — muscular styling offset by seven-spoke 18-inch alloy wheels. Admittedly it has lost one of its wheels — not from a corner, but from its rear fifth door, but the upside is a more urban look.

At the heart of the Vitara's long-term appeal (now in its third generation, it's been around since 1988 with more than 2.9 million sold world-wide) is its permanently-engaged four-wheel drive system that, along with 200mm of ground clearance, enables it to drive straight off the tarmac into the rough and defeat just about any bad weather that Mother Nature throws at it.

Dialling up any of the three four-wheel drive modes is done in an instant using the rotary switch on the fascia. On tarmac, just leave the knurled knob in its default 4H setting. That's it — no worries about switching it in or out because the four-wheel drive system is doing its work all the time. All you, the driver, ever need do is to pick your route and point the Grand Vitara's nose.

You'll also find an 'N' on the dial which disconnects the centre diff should your Vitara ever need to be towed — although it's much more likely that it'll be you and your Vitara doing the towing!

Higher off the ground than the average car but not so high that it's a climb, the Grand Vitara is nonetheless easy to get in and out of. Settle in behind the wheel and the first thing you'll appreciate is the excellent view afforded by the high seating position — you can see the bonnet and placing and parking the 'Grand' is child's play. The ergonomics are fine, with sensibly-sized switches and controls for the entertainment and efficient AirCon.

A multi-information screen inset in the main instrument cluster keeps you informed of key essentials such as fuel consumption, range and the outside temperature.

The three-spoke leather-rimmed wheel is good to grip; buttons on the horizontal spokes make it safe and easy to operate the cruise control and hi-fi on the move — better still, at night they're illuminated.

Helped in part by the large electric glass sunroof (one-shot tilt 'n' slide operation) and the deep glasshouse, the cabin is light and airy and a pleasant place to spend time travelling between A and B.

Five adults can be fitted in with no hint of a squeeze and there's ample space for legs, heads and shoulders. Three side-by-side in the back is comfy; rear legroom for passengers is good, with decent room to stretch out. With just two sharing the well-padded centre armrest and the backrests set to their maximum recline (they go from upright to semi-reclining), it's really very relaxing in the rear. Easy sliding rear headrests are great to use and drop down low to optimise the driver's rear view when not required. Black leather upholstery and supportive heated front seats ensure that everyone, wherever they're sitting, is happy.

Family-friendly it definitely is but it's also capable of moving biggish items when you have a need — we fitted in a good-sized fridge-freezer with the 60:40 split rear seatbacks folded down. Fold them properly (with the bases tumbled forward first) and there's 758 litres for cargo-carrying duties. Even with five aboard there's 398 litres for their luggage.

The fifth door is large and side-hinged and while side-hinged tailgates can be inconvenient if you're towing or you're backed up tight to a wall or another car, the Vitara's is hinged on the driver's side so opens easily to the pavement here in the UK.

The loadbay floor sits conveniently just above your knee, while the rigid luggage cover is segmented so can be flipped back for easy loading without removal. If you need to take it out, it stows away easily in the boot. And the spare that once graced the tailgate? Gone completely — you now get a puncture repair kit along with a 'tyre inflationary device'.

In its latest incarnation the Grand Vitara's 2.4-litre four-cylinder petrol engine benefits from balancer shafts, a 'silent' timing chain and a stiffer engine block for smoother performance and lower noise levels. This, plus some heavy-duty insulation and thicker window glass, keeps the sound of the four-pot on the right side of the engine bay and out of the cabin; noticeably so on motorways.

Which is all good news for cruising — made even quieter by just 2,000rpm in top gear being all that's necessary to coast along at the legal 70mph. Top speed is capped at 115mph. With 166bhp and 167lb ft of torque the Grand Vitara gets around town with no real effort — keep the pedal to the floor and it will hit the benchmark 62mph in 11.7 seconds.

The easy-changing manual 'box might only have five forward gears but they're more than sufficient. Officially, owners can expect 32.1 overall; our week-long test over mixed roads and in some extreme wet weather conditions saw an average of 28.8mpg.

Most drivers will consider that liveable given the Grand Vitara's 4WD. And most will be more than satisfied with its handling abilities: the well-weighted steering is sharp and responsive, it's predictable not only on-road in difficult driving conditions but equally off-road where it's far more accomplished than most of the trendy SUV-lookalike crossover brigade.

It's also reassuring through corners, helped by a firm-ish suspension. Not that it's not comfortable — it copes well with both off-road ups and downs as well as in-town broken tarmac and the often mandatory on-kerb parking in overcrowded streets. Stopping is taken care of by strong ventilated discs front and rear that have the added advantage of returning to peak braking condition quicker after wading through deep water.

Your safety is well looked after by an Electronic Stability Programme, front and side airbags and front and rear curtain airbags plus, of course, permanent four-wheel drive.

Easily transforming from commuter car to weekend workhorse, the Grand Vitara's also a sensible choice for everyday town and country motoring. And whenever the going gets tough, it will take on and beat bad weather of the kind that will stop most cars dead in their tracks. Far from being 'the last man standing', the Grand Vitara will be the last car still moving. — MotorBar