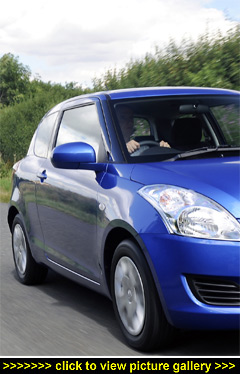 “Now bigger and better, Suzuki’s
Swift makes a smart alternative
to a Fiesta or Volkswagen Polo...”

HAVING ATTENDED THE PRESS LAUNCH earlier in 2010 for a quick test drive on Germany's nicely groomed roads, Suzuki's most important and best-selling model range deserves a bit more driving time from me on the UK's rougher roads — even if they turned out to be snow covered!

The all-new Swift three- and five-door superminis account for around 37 per cent (10,000 units) of Suzuki's total annual UK sales. The range went on public sale in September 2010 and looks similar to the outgoing model even though they are 90mm longer with a 50mm longer wheelbase.

The result is a more substantial looking hatchback with smart and distinctive angular styling lines. Thanks to the larger dimensions there's more interior space, in particular rear passenger legroom, and a bit more overall boot space — now 528 litres — with the rear seats folded down.

Official prices, like all other new cars, go up from January due to the 2.5 per cent increase in VAT but they remain very competitive in this sector, now starting at Ł10,210 and rising to Ł13,525 for the five-door with the automatic transmission option. But look out for offers in the New Year as the industry overall prepares for a tough 2011.

Currently there is only one engine option so all models have the new Euro 5, 1.2-litre, 93bhp, 87lb ft of torque, four-cylinder petrol unit.

A 1.3-litre, 74bhp, 140lb ft direct injection turbodiesel engine is scheduled to join the range in Spring 2011, which could add Ł1,000 to the price so despite being more fuel frugal, unless a really high annual mileage is to be covered, the extra cost is not going to be worthwhile.

The high-revving new petrol unit will officially return 56.5mpg with a manual gearbox and 50.4mpg with the popular auto 'box option. My test model, the SZ4 auto, returned 38.2mpg during my week of pre-Christmas stop/start driving in really cold weather so expect a bit more once the temperatures improve.

The CO2 emissions for manual models are 116g/km which means no VED road tax in the first year and then only Ł30 per annum. The auto 'box increases the CO2 figure to 129g/km which still means no road tax charge for the first year but then Ł90 a year from year two onwards. For the record, company car drivers will pay 10 per cent Benefit-in-Kind tax but the majority of users will continue to be private customers, mostly of an older age.

But the chic styling of the new Swift should really appeal to younger customers as well; and to singles or couples or as the second car where mum takes the children to school. It really does look smart on the driveway and makes a good alternative to the more commonly seen Ford Fiesta, Vauxhall Corsa or VW Polo.

I assume the Swift model name refers to the Swift breed of bird; certainly not to the car's performance. Joking aside, top speed for all models is more than adequate at 103mph. The 0-62mph time is 12.3 seconds for manual gearbox versions and 13.5 seconds for the auto.

The interiors of all models use a nice combination of various texture-finish plastic dashboard and door trims. It's not exactly plush but it looks smart, durable and well fitted. Inside or out, there's certainly no hint of a 'budget buy'. Visibility to the front is good but a little restricted to the rear corners.

The 1.2-litre engine needs to be worked reasonably hard to get the best out of it. But it's a high-revving unit and spins up happily without stress at real-life cruising speeds on open roads. The auto 'box doesn't obviously dampen the spirited performance; it still feels a punchy performer and, most importantly, makes light work of in-town, stop-start driving.

Unfortunately the auto gearbox costs Ł1,020 more than the five-speed manual unit so this means that my 1.2 SZ4 test model carried the top price of Ł13,525. This is still good but the manual version of the same model is even more attractive — at Ł12,505 — and that is very interesting for today's cash-conscious customers, especially when comparing the fuel economy figures.

The auto box is a bit of an old school technology four-speed unit but with an overdrive button — a real rarity these days. That said, it didn't detract from the driving experience at all and there wasn't anything to be gained by not having the overdrive in operation all the time as the engine was lively and torquey enough.

The ride comfort and road holding is generally very good — not as good as the Fiesta or Polo, but better than many others in this sector. The Swift's steering and handling are really sharp, making it precise and easy to drive and park.

In short, the new Suzuki Swift will be very easy to live with — it was for me even in the deep snow and there are no real ownership issues whatever the weather.

A 1.4-litre petrol Polo five-door with a more modern auto 'box will cost around Ł14,500, is less powerful and returns fewer miles-per-gallon with higher CO2 emissions. A Fiesta 1.4 five-door auto will cost around Ł13,500 and that also has poorer fuel and CO2 figures, so the Swift is a very sensible alternative.

While it lacks the first class driving dynamics of a Fiesta or Polo, the Swift is smartly styled, good value, comes with a high specification and benefits from a smooth auto gearbox. And it handles well and is fun to drive. — David Miles