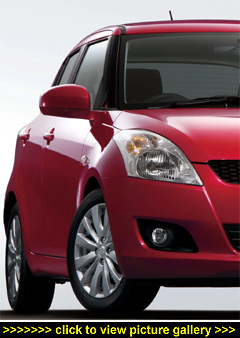 “First drive of Suzuki’s new World
‘small car’ — the supermini-sized
Swift hatchback — that comes to
market with the motto ‘more Swift’.
And they’re not kidding about
the ‘more’...”

AS A 'GLOBAL' CAR, Suzuki's three- and five-door supermini-sized Swift hatchbacks have to date racked up no less than 63 global 'Car of the Year' awards. Maintaining that momentum means not getting it wrong — so while it's just been significantly updated, the new Swift continues with the same classless styling.

It is also more grown up — slightly larger in all dimensions — and so offers more interior space (especially rear seat legroom), it's lighter and stronger, better equipped, has more fuel efficient modern engines and it is more comfortable with slightly more performance. When Suzuki said 'more Swift' they weren't kidding!

Priced from Ł9,995 up to Ł13,245, the three- and five-door 1.2-litre petrol versions, which account for around three quarters of UK sales, are arriving in dealerships just about now. They will be followed by a 1.3-litre turbodiesel engine option in the Spring of 2011. Specification levels remain SZ2, the best-selling SZ3 and SZ4 — and all offer improved levels of equipment with electronic stability control now standard fit on all versions.

Core to the many changes is the new Euro-5 1.2-litre four-cylinder petrol engine which replaces the previous 1.3-litre unit. This new powerplant features Dual VVT (variable intake and exhaust valve timing) which allows it to respond better to the varying loads placed upon it. Auto Stop-Start is available for some markets but not the UK — but only because the improvement in exhaust emissions is good enough to make Stop-Start unnecessary.

The new petrol engine produces 93bhp and 87lb ft of torque (previously it was 91bhp and 86lb ft). The Combined Cycle fuel economy is now 56.5mpg for the manual transmission models — an improvement of 7.8mpg over the previous 1.3-litre unit.

Exhaust emissions are down to 116g/km — a 17% improvement over the previous engine. Which means Ł0 First Year road tax and then Ł30 per year after that. For company car downsizers, the Benefit-in-Kind tax is an attractively low 10%. Top speed is 103mph and 0-62mph takes a sedate 12.3 seconds.

For the record, the 78bhp 1.3-litre turbodiesel engine option due next Spring is a Fiat MultiJet-based unit and will offer similar improvements; the headline figures being 109g/km of CO2 emissions (down from 119g/km) and 67.3 instead of 62.8mpg. Prices have not yet been announced but the diesel option for the previous Swift cost an extra Ł720 over and above the petrol models.

The new petrol engine might be fuel efficient but it's no ball of fire. Very sluggish at the bottom end of its rev range, it needs working hard to extract reasonable performance; plenty of gearbox use is required. That will not be a concern for many loyal Swift customers, I know, but there are better new direct injection petrol engines of the same size on the market.

At higher speeds, for instance on motorways, the engine gets noisy — indeed it is vocal most of the time and this fact is highlighted because the new Swift, in every other way, is such a quiet and smooth-riding car. That said, in real-life conditions this petrol engine is definitely fuel efficient with 45.2mpg being recorded during my international press launch test drive on motorways and hilly country roads in Germany.

Although the 1.3-litre turbodiesel engine will not be on sale in the UK for a while, I did get the chance to put it through its paces and it is certainly more responsive although the top speed is the same. It offers a better quality of driving, better flexibility at low speeds, better pick-up from low speeds and more mid-range response. In fact, this unit actually showed us how good the driving and handling dynamics of the new Swift are.

Fuel economy was 59.6mpg so it will be a choice of how much a new Swift owner values a better and more responsive drive as to whether they go the petrol or diesel engine route. I'd go for driving quality and pay more for the diesel-powered model and save on road tax (as it is Ł0 for each year) — the extra 14mpg is another bonus.

With either engine the new Swift is agile, very comfortable for a car of this size and the suspension really irons out the bumps and potholes — of course, they are not nearly as bad in Germany as they are here in the UK! Handling and driving comfort-wise, the new Swift is a real 'smoothie'.

Reasons to buy a new Swift include more space, more refinement, more fuel economy, agile handling, very good ride comfort, well equipped and high safety levels. My only complaint was the dull but nevertheless efficient petrol engine. Any more reasons to buy? Yes, the interior is modern and smart and although not the plushest in this competitive sector it is pleasant enough. Rather like the new Swift itself but add in cute, distinctive and comfortable. — David Miles