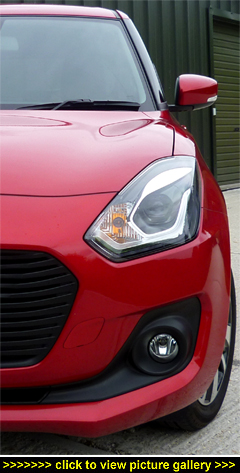 “Over the years Suzuki’s Swift has
established a large fan base, selling
5.4 million since 2005, and in June
this year the all-new next-generation
model arrived on British shores at
prices kicking off from just £11K...”

THE JAPANESE CARMAKER is well respected for its clever pairing of small cars and four-wheel drive, and this latest five-door hatchback will happily tangle with the best superminis from Ford (Fiesta), Vauxhall (Corsa), and Volkswagen (Polo). Three trim levels are on offer, along with a brace of petrol-only engines (1.0-litre three-cylinder or four-pot 1.2).

We've been driving the non-turboed 88bhp 1.2-litre Dualjet fitted with Suzuki's mild hybrid power booster system); as tested, it also comes with Suzuki's 4WD system and is rowed along by a five-speed manual 'box. The alternative is the turbocharged 1.0-litre Boosterjet unit that produces 109bhp from just three cylinders.

This newly-minted Swift uses a lightweight new platform that's already underpinning two other recently-launched Suzuki models: the Baleno and Ignis. A major benefit of this new set-up is that these next-gen Swifts tip the scales at some 100kg less than their predecessors, helping to make them 19% more powerful and at the same time 8% more fuel efficient.

Size-wise the new Swift is a smidgen shorter, measuring an easy-to-park 3,840mm from nose to tail, yet it manages to inject more millimetres into its wheelbase; consequently there's more cabin space as well as a significantly larger boot.

Although it's a fresh design, the family resemblance persists in the wraparound windscreen, wheel-at-each-corner stance, flared flat-cut wheelarches and short overhangs front and rear.

Fronted by a more upright — almost SUV-like — nose with a wide and aggressive grille, the well-grounded Swift features a gently rising waistline that flows back to meet the pronounced shoulders and sloping 'floating' roof — a look enhanced by blacked-out pillars and pillar-mounted rear door handles.

Open the driver's door and you'll find it has something else in common with the Swifts that have gone before — plenty of kit. Equally important, the cabin is as inviting as its equipment is comprehensive; the seats, nicely shaped and upholstered in a smart fabric with patterned centre panels, are comfortably and effectively bolstered with well defined shoulder padding and support, and come with height-adjustable seatbelts.

Once seated, be you the driver or front passenger, you'll appreciate the ample space between the front seats as well as the full fist of headroom and decent legroom. And, around your shoes, spacious footwells. There's driver's seat height adjustment and visibility out is fine (including rearwards through the full-width back screen) courtesy of a deep-ish glasshouse.

For the driver the switchgear is all well placed and intuitive, with the engine Start button close to the wheel on the left-hand fascia. The centre stack, topped by a large touchscreen, is angled to favour the driver with the three easy-to-adjust controls for the automatic AirCon set at a safe height. Red glowing outer banding defines the main pair of dials (with inset mini-dials for fuel and coolant temp) that are housed in individual nacelles. Contrasting pearlescent white fillets of trim on the dash and doors inject some sparkle into the cabin's charcoal grey colour theme.

For the record, Suzuki have also fitted plenty of in-cabin storage including deep, bottle-holding pockets on all doors, and more than enough spaces for your takeout coffees as well as mobiles, and a glovebox large enough to hold more than just gloves.

Comms are well covered too with a seven-inch touchscreen with navigation and 3D mapping with landmarks that make it even easier to follow your route; smartphone applications interface via MirrorLink and Android Auto.

iPhone users get Apple CarPlay for hands-free calls, and can receive directions for optimised traffic conditions, and listen to music, access email and and text messages, etc. Plus there's voice operation for the phone, navigation and media. Added to that, a DAB radio is fitted (with four speakers and two tweeters), as also is Bluetooth and those essential USB and Aux ports.

Also high on the list is collision-mitigating Dual Sensor Brake Support (DSBS). With DSBS, if the system determines a risk of collision with a forward obstacle at vehicle speeds from 3 to 62mph, it issues both an audio and visual warning. Should the driver then panic brake, brake assist, increases the braking force.

Finally, should a collision be likely, the system will apply full automatic braking. Other systems and features doing their bit to keep you safe include an electronic stability program, front, side and curtain airbags, LED headlamps, daytime running lights, front fog lights, LED rear lights, hill hold, Guide Me Lights (for safer entering or leaving the car at night), and tyre pressure monitoring.

But now let's get back to something that earned the previous Swifts their stripes — the driving experience. Setting the scene, and a nice fit in your palms, is the satin black, leather-wrapped, three-spoke, flat-bottom multifunction (trip, phone, cruise, speed limiter, audio) steering wheel that hints at some dynamic entertainment to come.

The new Swift's bodyshell is lighter and stiffer and, combined with new suspension, wider tracks to improve stability during cornering, and a lower and wider stance, promise some sharp handling.

Plus, of course, there's Suzuki's in-house ALLGRIP four-wheel drive system — as before, it's a fully automatic set-up that transfers additional torque to the rear wheels whenever required.

Not many minutes behind the wheel are needed to establish that this new Swift has lost none of its verve — at under a tonne it's nippy and agile, the positive steering is light but nicely-weighted, and it feels up to speed as much on the open road as it does weaving around the houses. And it rides with a consistently comfortable firmness that, particularly on steady speed runs, makes quiet, relaxing work of motorway trips.

Turning into corners it feels stable, with well-managed body control; push harder and the all-wheel drive counteracts understeer to maintain a purposeful line through. Sudden changes of direction — if you're lucky enough to find a chicane! — deliver satisfaction and entertainment in equal measure. There's no doubt that the ALLGRIP system infuses the Swift with a palpable sense of confidence — so don't spec it purely for the rain and snow. Braking too is fluent enough not to be noticeable; when you brake you stop without drama.

The SHVS 'power booster' does lot in return for the very minimal extra weight it adds — a mere 6.2kg. Officially known as an Integrated Starter Generator, it's a combined starter motor-generator. Belt driven for quieter engine restarts, it saves fuel as it assists the engine during pull away and acceleration using electricity generated through regenerative braking which is stored in a compact battery pack under the passenger seat.

The value of its assistance is a handy 36lb ft of torque; enough to usefully boost engine response from low revs as well as allowing higher gears to be used at low engine speeds in busy traffic to save fuel.

With a slick, short-throw manual 'box containing a well spaced set of five ratios, keeping the Swift 'swift' is no hardship; certainly it feels much pacier than its paper figures would suggest and, in fact, pulls heartily even two-up with a full load of luggage.

Economy for supermini buyers is a big deal and the Swift doesn't disappoint here either — the SHVS does its bit not just to save fuel but also by contributing to lower emissions; in the Dualjet's case, of 101g/km. Even so, at the newly-increased rates this still means a Ł120 road tax bill for the first year followed by Ł140 from year two.

Officially, the 4WD Swift claims a 62.8mpg Combined Cycle figure, making it hardly any thirstier than the two-wheel drive versions that are rated at 65.7mpg. A punishing week in the hands of MotorBar's testers saw an overall average recorded of 54.3mpg. Bearing in mind that most everyday drivers will do better than us, few will be muttering about that.

Neither will you hear complaints from your rear passengers, who will enjoy decent head room, comfy backrest angles and enough knee-room to let them stretch out their legs. Three is doable although two will enjoy more wriggle room while taking in the views, which are improved by the back seats being set a hand's-breadth higher than those in front. For parents, Isofix child seat anchorages and childproof rear door locks are yet another 'plus'.

Luggage capacity is practical for a supermini, with a regular-shaped 265 litres for cases or shopping; you have to load stuff in over a deep boot lip, but it's not a problem. Folded flat (and they do), the 60:40-split seatbacks create a 579-litre loadbay. Of course, you won't always need to open the tailgate because, being a four-door, the rear seats make easily-accessed areas to sling things. If you prefer to keep cargo and bodies apart, the Swift is game enough to tow a braked 1,000kg. And yes, for the predominantly damp British climate, of course there's a rear wash-wipe.

Well equipped — and better priced than a 4x4 crossover — the new Swift is an engaging 4WD supermini with a roomy cabin and smile-inducing economy. It's also easy to drive and polished enough to make the grade as a satisfying real-world all-rounder. ~ MotorBar