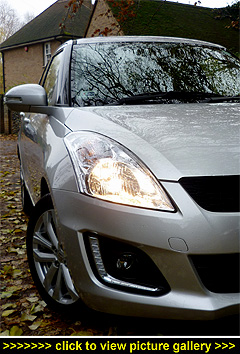 “Suzuki’s supermini Swift range is
topped-off by the hard-charging
134bhp Sport model — but you
don’t have to go that high up the
line to have fun in a Swift. Even the
56.5mpg, 1.2-litre model can bring
a smile to your face while performing
its everyday duties...”

WITH JUST 92BHP and 87lb ft of torque you might think we're having a laugh — we're not; we're deadly serious. A week of hard-driving behind the wheel of the recently revamped Swift, in all sorts of challenging weather, point-to-point on country backroads as well as more regular blacktop, has once again proved that it's not so much what's under your bonnet as what's under the bodywork that counts.

Schumacher was fond of telling how he first learnt to 'carry speed' driving a Fiat 500. And the Swift — even the 'bread-and-butter' versions — has a chassis that lets you do just that. Given the right underpinnings, 1,242cc and 92bhp is more than enough to get the job done well — 103mph and zero to 62mph dusted in 12.3 seconds.

On backroads you can track through tricky hairpins and storm through sweeping bends safe in the knowledge that the Swift's chassis can handle getting you through cleanly...

Okay, you might not be travelling at the velocity of an Evo, but nevertheless there's a genuine satisfaction to be had by getting your lines right and carrying your speed with you. Do so and you can cover ground surprisingly swiftly.

The Swift's tidy body control and good grip keep it stable however you punt it, and it feels secure at speed. Plus the electrically-assisted steering comes with crisp turn-in and is as quick as a kitten. Add in decent brakes with good brake pedal feel and you have a well-rounded, wieldy, and fun driving machine. In fact, very much like the 1.2's big brother, the harder-charging 1.6 Swift Sport.

The 1.2-litre dual VVT (Variable intake and exhaust Valve Timing) petrol engine under the Swift's bonnet is a little gem; it spins sweetly, willingly delivering pulling power across a broad range although it really hits the spot around 4,500rpm. And even when you cane it, it never sounds thrashed — only eager.

Although top gear is numbered 'five' and not 'six', motorways can be cruised calmly — 70mph calls for 3,000rpm in top, keeping it all pleasantly stress-free on long trips. Whatever your driving style, this 1.2 will be happy to play along.

And while you do need to work the 1.2-litre's gears if you want the pace, the five-speed manual 'box is a team player, pitching in with fast and light changes made even better by a short throw and a light clutch action.

On several solo trips through the narrow, serpentine (and sometimes dangerously deceptive) country lanes criss-crossing the Kent countryside between Hastings and Sandwich in unrelenting rain, the 1.2 Swift proved to be a thoroughly entertaining and reassuringly predictable companion — with the audio system mute every mile of the way.

More good news — none of the above generates a hidden ride penalty. The ride does have a firm-ish edge but the suspension is compliant enough to absorb the fallout from even quite bad potholes without jarring. Good enough to make the Swift a car you, and your passengers, will like travelling in on a regular basis.

Hitching a ride is easy — whichever of the doors you use, front or rear, all open wide to let you into the Swift's well-equipped cabin. Standard kit on our Silky Silver metallic SZ4 test car was pretty comprehensive with keyless entry, push button start, automatic AirCon with pollen filter, and a MP3/WMA-compatible CD tuner with four speakers and two tweeters.

You sit well off the floor in the wide, sensibly bolstered front seats, which are nicely accommodating and upholstered in smart black fabric with tasteful blue-and-grey pinstriped centre panels. Outer armrests on the doors are welcome, and the Swift's high roofline also means headroom's not an issue.

The driving position is spot-on thanks to seat height adjustment and plenty of reach and rake for the multifunction (voice, phone, cruise, and audio) three-spoke steering wheel. Visibility out is excellent, helped by large glass areas and slim pillars — placing and parking the Swift is a doddle.

All trim materials look good, as does the dash with everything laid out logically, and fit and finish is neat. Plus there's plenty of in-cabin storage including a large glovebox, cupholders, deep centre console, a lidded bin in the top of the fascia, and capacious bottle-holding pockets on all doors.

Rear passengers have enough leg room and plenty of space for their feet as well as outer armrests, and the rear bench is comfy and will accommodate three. Travel in the back and you sit higher than those up front, with air above your head, and can enjoy the views out through the privacy glass.

With two extra doors it's now easier to carry three in the rear cabin; but they'll have to travel fairly light — boot space is 211 litres although 528 is available if you aren't using the rear seats. Folded down they offer a flat loadbay; the small 'step' between the folded seats and the boot floor is not a problem.

As they're split 60:40, there's always the option of mixing-and-matching people and packages with one or two travelling south of the driver and front passenger.

Access to the regular-shaped boot is helped by a high-opening tailgate. And Suzuki give you a real spare wheel and tyre, albeit a space-saver. Still, better by far than a can of puncture sealant. The lightweight rear parcel-shelf-cum-luggage cover is easily removed; in situ it's hollowed out so light items can be carried.

This Suzuki 1.2 four-pot is one of the cleanest petrol engines on the market; its 116g/km of CO2 (one of the lowest in its class) attracts an annual road tax bill of just Ł30. In addition it's refreshingly miserly with unleaded: officially 46.3mpg urban; 56.5 combined; and 64.2 extra-urban. At the end of a week's spirited testing, our 1.2 had averaged 49mpg — a real-world figure that should please anyone.

For the record, the Swift recently received some cosmetic upgrades (too subtle to qualify as a makeover) and specification changes as well as the introduction of two extra models to the line-up — the 4x4 five-door 1.2-litre and the five-door 1.6-litre Sport. Styling refreshments to the regular Swift include a new design front bumper and grille with silver detailing, a new LED high-level brake light, and new design alloy wheels. As the wisdom says: If it ain't broke…

The Swift delivers a genuinely enjoyable drive for those who appreciate such things; even if you don't like grinning when you're driving, it still satisfies as a great everyday car that's usefully compact for today's cluttered roads while at the same time being accommodating enough to successfully deliver on all real-life's motoring requirements.

And, as a racing driver once remarked, it's more satisfying to get speed out of a 'slow' car that have it all handed to you by a big, lazy V8. A sentiment thoroughly confirmed by a spirited drive in the 1.2-litre Swift. — MotorBar