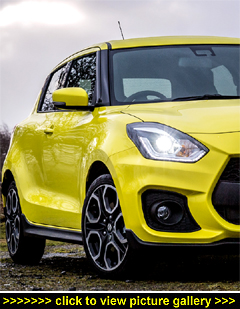 “With a turbocharged ‘high torque’
138bhp petrol engine under its
bonnet, Suzuki’s new third-generation
Swift Sport is both ‘hot’ and ‘hatch’...”

PACKAGED IN A FIVE-door supermini hatchback bodyshell that's cheekily attractive and rolling on eye-catching two-tone 17-inch alloys, it's fronted by a wide and low double-grille, some very convincing faux carbon-fibre body finishing and aerodynamic under-spoilers and, at the neatly docked tail, a tailpipe either side of the diffuser, all capped by a 'floating' roof with a body-coloured top spoiler.

The rear-doors are artfully integrated into the bodyshell and combined with equally well camouflaged high-level door handles, give the five-door the clean, almost coupe-like look of a three-door. Choosing which version to buy is a no-brainer — there's just the stand-alone Sport model, and the good news is that it comes in one highly-specced trim level.

Powering the Sport is a 138bhp 1.4-litre, four-pot, Boosterjet petrol engine (that's also used in Suzuki's Vitara S). The previous generation Swift Sport used a non-turboed 1.6-litre outputting 134bhp. This new one might only gain a few bhp but it's what's backing it up that makes all the difference — 170lb ft of torque, is what. On call from 2,500rpm, it represents a substantial 44% (52lb ft) gain over the superseded 1.6-litre.

Boosting its effect even further is the fact that this new Swift Sport has not only torqued-up but slimmed down — the extra 'grunt' has 70kg less to shift. The improved power-to-weight ratio also puts it in the frame with more costly hot-hatch rivals such as Ford's new Fiesta ST, Renault Clio RS and the Corsa VXR from Vauxhall.

The Boosterjet is a sizzling direct injection turboed unit and it's keen to show you what it can do; acceleration is of the raring-to-go variety, as confirmed by a 0-62mph time of 8.1 seconds. Take it all the way and you'll see 130mph.

If fuel economy matters as much to you as V&V (vim and verve) then relax — officially the Combined Cycle figure is 50.4mpg; given that at the end of a hard-driven week our test car's onboard computer was showing a test average of 48.4mpg, regular drivers should regularly see 50mpg+. Throw in CO2 emissions of 125g/km and you won't pay a penny more than Ł165 for the first year's road tax; after that it drops to under three quid a week.

Ensuring you can make the most of the power whenever you want is a short-throw, clean-changing six-speed manual 'box. However, thanks to the torque on tap you'll find that you can often leave it in the higher gears and not bother to change down as early as you might have expected — even country lanes (unless you're really pressing on) are fifth-gear territory.

You don't ever need to thrash this sparky Boosterjet. Even medium pressure on the loud pedal, especially in the lower gears, demonstrates that this Swift is true to its name — it zips forward eagerly, always ready to tango to your right foot's tempo.

Built in Japan, this latest Sport rides atop a new lightweight and stiffer platform and suspension set-up (with superior Monroe rear shocks) that sees it trimmed, toned and ready for action. On the move it's satisfyingly sure-footed and wieldy with agreeably direct and consistently weighted steering — all of which makes it eminently chuckable.

It stays flat, enough to keep passengers happy during enthusiastic cornering, and politely resists being wrong-footed even by a clumsy driver lifting right-off mid-bend. It also makes light work of hard braking, courtesy of the strong showing from the ventilated 285mm front discs (with solid discs bringing up the rear).

If we haven't already made it clear enough this new Swift Sport serves up driving enjoyment in spades. The ride, too, is nicely absorbent; sufficiently supple to filter out raggedy tarmac without handicapping the car's dynamic integrity.

Pleasantly-holding bolstering plus effective built-in lower and upper back support make them fine long distance choices. You can take for granted generous headroom and plenty of room for knees, shins and feet.

Red features on the instrument panel too with red circling the dials; between them is a multifunction digital display for all the usual trip info along with graphically presented trackday stuff such as turbo boost, engine oil temperature, engine output and torque data, acceleration and brake operation, as well as driving G-force tracking.

While it's nice to have, during spirited drives we didn't actually look — at 7/10+ the physical feedback through the seat of your pants is all you really need; in the same way that you don't need a rev-counter to tell you when to change up! The wheel is a multifunction, leather-wrapped, flat-bottomed three-spoker with perforated work areas and feels 'game on' in your palms — and is a great partner to the spot-on driving position, itself made better by the deep glazing and unrestricted all-round visibility.

In a Swift Sport finding your way is about as easy as it gets — the touchscreen SatNav takes full postcode destination inputs and then guides you flawlessly using crisp and clear 3D mapping. Immediately below the infotainment display are three foolproof rotary knob controls for the climate and these also work a treat when you're on the move with minimal distraction. Straightforward, too, is the trad-style pull-up handbrake.

While it's quite the pocket-rocket when you unleash the Boosterjet, at a cruise or just pootling happily along the cabin is quiet and refined and you can simply relax in the comfortably supportive seats.

You also get a lane-keeping assistant that will, between 37mph and 100mph, nag you and even nudge you back into line. While some drivers will find this undeniably useful, we turned it off while we concentrated on enjoying the Swift's deep reserves of unblemished dynamic ability. There's also automatic dip/main beam switching, tyre pressure monitoring, LED headlights and taillights, LED daytime running lights, height-adjustable front belts, and auto lights and wipes.

Sitting in the back is almost as good as sitting in the front courtesy of clear views out (you sit higher than those ahead of you); there's even room to stretch your legs and wiggle your feet! The boot takes 265 litres (that's 25% more than the second-gen Swift Sport) and the 60:40-split back seats add load/passenger carrying options. The luggage cover is a lightweight and easily-removed parcel shelf and despite a lift-over rear lip and a step-up from the boot floor to the folded seatbacks, which takes the capacity to 579 litres, the boot-cum-loadbay is practical for a 3.9-metre-long supermini.

A highly competent all-rounder with an impressively sporty character that enthusiasts will find irresistible, the all-new, lighter-and-quicker Swift Sport does everything it says on the label; its flip side is its easy-to-live-with, real-world five-door, five-seat supermini practicality — all smartly packaged and pleasingly affordable. ~ MotorBar