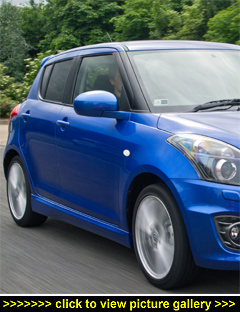 “These days a ‘monkey’ doesn’t buy
you very much. However, if you’re
planning on owning a Swift Sport —
Suzuki’s über-popular hot supermini
— an extra Ł500 gets you quite a lot:
two additional doors and a whole
heap of extra practicality...”

FIVE-DOOR SWIFT SPORT models cost Ł14,249 — that's just Ł500 over the price of a three-door Sport. More seats it has (the 3-door accommodates four; five can travel in the 5-door) but under the bonnet still beats the same four-cylinder 1.6 litre VVT petrol engine that powrs the 3-door model, delivering sub-9-second 0-62mph acceleration alongside an official combined fuel consumption of 44.1mpg.

Now would be a good time to mention that our week-long average came out at 44mpg. Impressive... not just because of the Sport's performance, but impressive because only a handful of our test cars ever get this close to their 'official' fuel consumption figures.

Other than the pair of extra rear doors, the accompanying but mild makeover changes are minimal: LED-type high-mounted brake lamp, an 'auto up' feature for the driver's window and, far move obvious, and at no additional charge, a new Boost Blue pearl metallic paint finish. If stand-out blue's not for you, then there's Cool White and Cosmic Black pearl metallic, or Silky Silver metallic to choose from.

Inside, up front it's also much the same as before. Which is a good thing because the Sport's cockpit is a very agreeable place to be. Suzuki has crafted a well-fettled workplace for the keen driver that's honest-to-goodness friendly and functional.

For a start the driving position is spot-on, visibility is first class, and the sports-style seats do precisely what they should in a hot-hatch — hold you in place with their firm bolstering while supporting your body in all the right places. And the six-speed manual box's short-throw lever has a delightful change action, so making best use of the six ratios is a pleasure in itself.

The interlinked five-dial instrument pack lets you take in the desired information in the quickest possible glance while minimising the time your eyes are away from the road. From left to right you have engine coolant temp, rev-counter, driver's information, speedometer, and fuel.

Adding to the feeling of being in control from the driver's seat is the no-messing infotainment touchscreen with large icons that make it a breeze to use safely on the move. The SatNav side accepts full postcode destinations, uses sharply-defined 3D mapping, and is refreshingly intuitive to operate.

The trend today is for infotainment systems to offer the earth, from Google to endless apps. However, like mobile phones, they come with a hidden danger — driver distraction, which, incidentally, is now overtaking drink-driving as the number one on-the-road killer (Death by Mobile) in the UK. Don't worry; even if the Sport had them you probably wouldn't be playing with them — trust us, when you're driving the Swift Sport you won't crave any other pleasures.

You also get keyless entry for hassle-free door locking and unlocking and a push-button engine start. Saves all that messing about finding your keys every time you return to your car, especially on a wet day.

Simply press the small black button on the door handle to unlock and then once you're settled inside, depress the clutch and press the ignition button to start the engine. After you've parked up, push the start-stop button again, and get out and press the door button to automatically lock and immobilise the car.

The new design sport seats are upholstered in a smart fabric with hi-tech look centre panels and are supplemented by long, comfy outer armrests on the doors, although it will be your front passenger who benefits most.

Plenty of storage bins, cubbies, cupholders and bottle/can-holding door bins are dotted about, and the AirCon is quick to supply plenty of whatever temperature air you call for, hot or agreeably chilled.

The five-door model's rear seat takes three side-by-side — the two-door only seats two in its rear cabin. If you're riding in the back you'll be sitting easily thanks to a decent backrest angle, tall headrests, long outer armrests, and a well-padded base that's set high enough off the floor to ensure good lower leg comfort. There's also plenty of foot room. Getting in and out is easy on your body, too.

One of the Swift Sport's plusses is its compact footprint: with an overall length of 3.9 metres and a 1.7-metre width, it's easy to slot into gaps in the traffic. But with five seats you might think that doesn't leave much room for luggage.

Actually, its 211 litres do seem to go a long way, helped by the fact that the boot is pretty deep although you do have to lift your cases over a mid-thigh lip to get them in or out. Actually not a problem. If you're travelling solo or with just one significant other then you can always fold the 60:40 split seatbacks to make a 512-litre loadbay. You'll also find bag hooks in the boot.

So, loaded with an extra pair of side doors, just how does the new five-door Sport go? Thankfully, exactly as it did when it only had three. The heart of its appeal is still to be found in its accomplished and playful chassis.

The real proof of its ability is that you don't need mega wild horses in the engine bay to have serious fun. Indulging the Sport's involving handling at any speed is satisfying: many hot-hatches really only really hit the happy spot at eight- or nine-tenths of their dynamic ability; the Sport will have you smiling all the way from four-tenths to full-on maxed-out ten-tenths.

No worries, either, about the power steering being electric — turn the grippy, matt-leather rim and the Sport reacts smartly, going precisely where you point it. Charging into corners or spearing through a series of back-road twisties, the ever-agile Sport stays faithful to your intentions, the excellent damping, strong grip and smoothly compliant ride keeping everything shipshape.

Monroe shock absorbers are fitted as standard and some fine-tuning of the chassis and suspension has improved the latest model's handling over that of the previous Swift Sport, with the latest Sport showing enhanced stability both in a straight line and under hard cornering.

Naturally it helps that the character of the chassis and the naturally-aspirated 1.6-litre petrol engine are so well in sync. Sure, the chassis could take more power but in truth it doesn't need it — wherever you are in the rev-range, throttle response is keen. Thrash it and it just comes back, eager for more; even approaching the 7K redline it's still game-on.

Driven less energetically on the daily commute, it's perfectly civilised, the 118lb ft of torque taking the worst stop-start city conditions in its stride.

While its sports exhaust (note the two tailpipes; one each side of the rear diffuser) clearly helps the variable valve-timed 1,586cc four-pot to rev freely, it doesn't bark and burble as much as some hot-hatch pilots might like — the good news, of course, is that you can press on without attracting unwanted attention.

Motorway trips, with the cruise control doing its bit, are a rock-steady breeze; and you can relax back in the comfortable seats in the calm cabin ambience as the scenery and the miles fly by.

The five-door Swift Sport offers a satisfying blend of a responsive petrol engine and a communicative and compliant chassis that together create a positive dual-usage character: on one side there's a thoroughly well-behaved, economical and practical everyday car; on the other it's a fun-loving hottie that genuine driving enthusiasts will get real enjoyment from punting around. As they say: buy the ticket, take the ride! — MotorBar