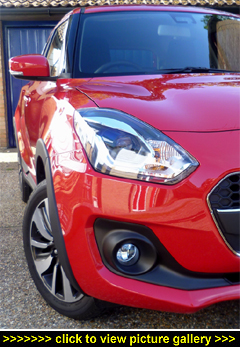 “Small hatchbacks with all-wheel
drive are few and far between,
but if you’re interested then look no
further than your nearest Suzuki
dealer — not only does the Suzuki
Swift fit the bill but it comes with
hybrid power...”

HYBRID POWER, YES; but it's not a full-blown hybrid. The Swift's SHVS 'mild' hybrid is a cleverly simple piece of tech that adds just 6.2kg to the overall weight and using electricity generated through regenerative braking drives a small electric motor to assist the 88bhp 1.2-litre Dualjet petrol engine when pulling away or going for an overtake.

However, the main benefit here isn't so much the power boost but the improvement to fuel economy: officially the Swift Dualjet SHVS returns a respectable 49.7mpg in the Combined Cycle but without even trying to drive economically we logged an impressive 55.7mpg during our week-long test in messy traffic over mixed roads. And a parsimonious best of 63.9mpg!

When it comes to street cred the compact Swift has more than enough zing to hold its own — black wheelarch inserts and smart alloys give emphasis to its wheel-at-each-corner look while the distinctive blacked-out C-pillar treatment (incorporating high-mounted rear door handles) creates a 'floating' roof. Muscular rear haunches enhance the sporty stance while at the front-end the wraparound windscreen, deep hexagonal grille, and bold headlights make for a thrusting let's-get-on-with-it nose.

The Swift's normally-aspirated four-cylinder 1.2-litre Dualjet petrol engine makes just 88bhp but boosted by the SHVS electric motor and backed up by 88lb ft of torque it delivers enough poke to take quick advantage of gaps in city traffic — or to breeze along motorways at the legal limit (top speed is 105mph).

And given that it's also equipped with all-wheel drive, it's up for it whether you're threading along tricksy tracks or sticking to tarmacadam. The manual five-speed 'box benefits from a gearlever that's not only close to hand but features a short, accurate throw, making it a pleasure to keep the engine in its sweet spot. It's also pretty refined, even when you're piling on the revs. For the record, 0-62mph takes 12.6 seconds.

Size-wise the Swift fits the conventional footprint of a supermini, occupying a mere 3.8-metres of road. However, while small on the outside it's surprisingly accommodating on the inside. There's a sporty air to the cabin and dash and some upscale finishing such as the sparkling pearl white trim accents on the dash and doors, making for a refreshing contrast to the charcoal-grey trim. A multi-function, flat-bottomed steering wheel does more than just look the part; it feels great in your hands and the girth of the leather-wrapped rim is finger-comfortable on long journeys.

The shapely, black fabric-upholstered seats are lightly bolstered and do a decent job of keeping you in place, slow and fast. And there's loads of room for your front passenger to stretch out and relax. There's even enough space between the front chairs to avoid any elbow clashes. A fist of headroom seals the deal, ensuring even tall passengers will feel at home.

For the driver it's all win-win: not only is the driving position spot-on but there's excellent forward visibility courtesy of a tall, wide windscreen and slim A-pillars and a rear screen that's deep and wide so no worries about parking or reversing because you also get a reversing camera and rear parking sensors. And while it might not be sexiest part of the car, the rear screen's wash/wipe will be much appreciated on those not-so-rare rainy days.

The comms are homed in the large seven-inch infotainment and navigation touchscreen sited in dash-central. It's intuitive to use and incorporates SatNav with pin-sharp 3D mapping that makes landmarks easy to identify; the navigation is foolproof with quick destination entry and very helpful auto-zoom lane guidance, plus the posted speed limit is clearly shown on active maps.

As you would expect, a DAB radio (with four speakers plus two tweeters) is standard-fit as too are Bluetooth, Apple CarPlay and Android Auto for smartphone integration so you can, in addition to making calls, also receive directions for optimised traffic conditions, listen to music, and access email and text messages. You also get voice control for the phone, navigation and media so, for example, you can activate a call, enter an address, and play a track by title or artist.

The driver also benefits from circular, trad-style white-on-black dials, each set in their own nacelles and angled towards the driver for maximum clarity. Between them is a 4.2-inch multi-information LCD colour display that shows a range of information including engine output and torque data, fuel consumption, average speed, acceleration and brake operation as well as driving G-force tracking. For the Hybrid, an energy flow diagram is also included. All of it is quickly accessed and scrolled through using the 'Info' button on the multifunction wheel.

It's also well specced when it comes to safety. For a start there's Suzuki's Advanced Forward Detection System that will both warn the driver and brake autonomously to apply full braking if it senses a collision is unavoidable. Unlike some similar systems in other small cars, the Swift's set-up works up to 62mph rather than only at town speeds.

In addition you get lane departure alert (come out of your lane without indicating and you'll get a visual and physical warning), a weaving alert (a wake-up call for drowsy drivers), electronic stability programme that cuts in if the car begins to skid, adaptive cruise control and, of course, the four-wheel drive. Equally essential are items such as the height-adjustable front seatbelts, front, side and curtain airbags, LED projector headlamps (with automatic dip/main beam switching), LED daytime running lights, front fog lamps, LED rear combination lamps, and tyre pressure monitoring.

The chest-height rear door handles in the C-pillars are convenient and the wide-opening back doors ensure easy in/outs. Once in, headroom in the back is far better than you would expect from outside: there's almost a fist of it; settle on the rear bench and you'll have a several inches of air above the crown of your head. Add to that deep side glazing, adequate knee-room — even when sat behind a tall driver or front passenger — and plenty of space for even size eleven boots.

Small bottles can be carried in the rear door bins (larger ones in the deep door pockets up front) and there's a pouch on the front seatback for oddments. While there's no central armrest, the slim outer ones are fine and gel nicely with the comfortable backrest angle. Passengers will be pleasantly surprised at just how restful it is travelling in the back of the Swift. Usefully, and also somewhat unexpected, three teens can be strung out side-by-side.

The ride is as good as you'll find in the likes of a Ford Fiesta or VW Polo. In other words, the suspension soaks up the lumps and bumps effectively, making progress over most blacktop fairly fluent despite it being a tad on the firm side — but then there are the compensating handling dividends. Overall it's a perfectly acceptable trade-off that adds a large dollop of joyfulness to the driving experience — and few Swift drivers would have it any other way. The alloys are wrapped in 185/55 Bridgestone rubber that helps cushion the worst bumps and ridges, and while you will hear the occasional thud of a pothole the ride is calm and satisfyingly fluent at steady speeds on major roads. Definitely a car for both commuting and country escapes.

Throw the Swift into a testing bend or corner and you'll relish the nimbleness and liveliness that comes from its lightweight new-generation platform and bodyshell — the SZ5 AllGrip weighs-in at under a tonne: 980kg.

Courtesy of the 4X4 system, there's plenty of grip too: the fully automatic permanent four-wheel drive layout sends additional torque to the rear wheels whenever it's needed.

All very reassuring not just off-road but in everyday driving too, and especially when the roads are blanketed in that fluffy white powder we all love to hate.

Factor in minimal body roll and responsive steering that's quick to respond (plus light enough for undemanding in-town manoeuvring) and which weights-up reassuringly as the speed rises, and you have a puntably petite car that's keen to serve up genuine driving entertainment. Helped out by a raised ride height the AllGrip copes well with mud, wooded tracks and slippery hillsides — as it happens, you'll be pleasantly impressed by just how capable the Swift is 'on safari' in the British Isles.

You don't buy a supermini for its boot. That said, the Swift's 265-litre 'trunk' has more than enough to take four peoples' carry-on cases. A high-opening tailgate and rear parcel shelf-style load cover makes for hassle-free access. Drop the 60:40-split rear seatbacks (helpfully they fold flat) and this balloons to 579 litres. You do have to load over a sill with a deep-ish drop to the boot floor but it's not a problem; and with the rear seats folded there's a step-up to the forward-end of the loadbay area. Again, not a problem and also not something you won't find in other cars in this class. And the good news? Despite its small size, the 1.2-litre Swift will tow a braked 1,000kg.

Appealing outside and with a smartly fitted-out interior that's unexpectedly spacious, the Swift is grippy, nippy and fun to punt. Unlike some, this supermini doesn't force you to choose between driving entertainment and economy because it freely gives you both. Another corking good drive from Suzuki! ~ MotorBar