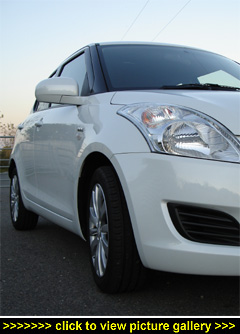 “There’s a new, sharper-looking
Suzuki Swift on the streets but you’ll
need to look very hard indeed to
spot the difference — at least from
the outside because what hasn’t
changed is its stand-out-from-the-
supermini-crowd good looks...”

INSIDE THE LATEST SWIFT you'll find a smarter cabin that eschews funkiness for its own sake. Like flash on web pages, flash in cars is short-lived and Suzuki has, sensibly, gone for neat rather than natty.

Ergonomics are spot on — this is one of those rare cars that, even if you'd never seen one before, you can just jump in and drive off and don't have to read the handbook before you turn the key. Right from the moment you pull on one of the smooth-acting, body-coloured door handles, the Swift is a very easy car to live with.

Tested here is the new 1.3 DDiS diesel-powered Swift that's only available with five doors and in mid-range SZ3 spec. Not that that's a problem because you get enough kit to make life tolerable.

Standard fit items include front electric windows (the driver's side has an auto one-shot down function), heated electric door mirrors (and of a good size, too), air conditioning with a pollen filter, MP3/WMA-compatible radio/CD with USB port, remote audio controls on the steering wheel, tinted glass, driver information display and 16-inch alloy wheels.

In addition, there are seven airbags (front, side, curtain and driver's knee), a front passenger airbag deactivation switch, ABS with Electronic Braking-Force Distribution and, most importantly, an Electronic Stability Programme along with a five-star Euro NCAP rating.

There are seven metallic and two solid colours to choose from — finished in Cool White Pearl metallic, our DDiS test car cut quite a dash. Metallics are a Ł390 option but well worth the money.

The good-sized front seats are well-shaped with enough side bolstering to hold you comfortably and upholstered in a pleasant fabric in two shades of black (plain with patterned centre panels). Seat cushions are long enough to provide firm under-thigh support and the front seats are set high off the floor — both features that enhance core comfort on longer trips. In fact, despite its 'supermini' tag, the Swift proved to be surprisingly comfortable transport for long-distance journeys. Also appreciated are the height-adjustable seatbelts and the roomy footwells — so no barked shins or knees, either.

The new Swift, at a compact 3.85 metres, is 90mm longer than its predecessor; and an extra 50mm in the wheelbase makes for a roomy cabin. Rear accommodation is pretty good too, with ample legroom and lots of space for big feet. Two adults and a teen in the back is very do-able — the 'two-and-a-half' mix is dictated by the centre headrest being smaller and not rising as high as the outer pair. With the rear seats positioned higher than the fronts, the view out from the back is never boring. Rear windows are wind-up/down but the glass drops fully down into the door.

Behind the 60:40 split rear seatbacks is a 211-litre boot — not massive, but deep and certainly usable with a high-rising, head-friendly tailgate and regular-shaped loadbay opening. You can fold them down to create a 528-litre load bay although because they rest on the well-padded seat bases, the folded backrests create a step up from the boot floor into the extended cargo bay. However, unless you need to transport a washing machine it's not a problem. The rigid rear parcel shelf-cum-luggage cover lifts out easily and can be stored conveniently in the boot.

A good driving position is easily set and although there's no reach adjustment for the smooth leather rimmed, three-spoke steering wheel, there is 'tilt' height adjustment; combined with the seat base's rachet-up height adjustment, it works well. Headroom is also good, even for six-footers, thanks to the deep glasshouse which also ensures that visibility — to the front, side and rear — is fine.

The instruments provide a welcome dash of silver in the cabin's predominantly black colour scheme. Talking of which, the three-dial instrument cluster now includes a driver's display that shows external temperature, next oil change, A/B trips, range and average and instant mpg.

The centrally-mounted audio control panel has large easy-to-use buttons; all major audio functions are also operated by controls on the steering wheel. Several practical cubbies are fitted, including a lidded bin in the top of the fascia and a good-sized glovebox. The AirCon is straightforward and effective, and pushes out good volumes of both hot and cold air.

While everyone appreciates some enjoyment in their driving, the DDiS's trump card in recession-bitten Britain is without doubt it's excellent real-world economy.

Indeed, few cars today can match the easy 60.1mpg we achieved over a week's test and which took in stop-start town driving, tricky back lanes and fast motorway runs. Our road-testers really do put Motorbar's test cars through their paces so that whatever mpg figure we record, the average driver should be able to better.

Of course, the other good news about the Swift is that it hands out no driving pleasure penalties for your 60mpg, either in handling or ride. The Swift is already acknowledged as one of the best handling cars in its class and to date has won 63 Car of the Year awards in 19 countries.

The revised 1,248cc four-pot turbodiesel in the DDiS kicks out 73bhp alongside a gutsy 140lb ft of torque, on hand from a usable 1,750rpm. The turboed unit spins sweetly and combined with a nicely stacked set of ratios and a great-to-use gearchange delivers a smooth, eager drive that sees the benchmark 62mph reached in 12.7 seconds.

Top speed is 103mph and on the motorway there's enough in reserve for it to pick up cleanly in top gear, even when cruising around the 70mph mark. Do watch out though, because it is quiet, particularly so for a diesel, and it's all too easy to find yourself bowling along on the wrong side of the legal limit.

At the other end of the speed scale, its rev-happy nature makes the DDiS satisfyingly brisk and nimble jockeying in town.

Which brings us neatly back to the Swift's entertaining handling that, going by its wheel-at-each-corner stance promises to be good. The new bodyshell is both lighter and stiffer, the track is increased and wheels and tyres are larger diameter — 185/55 16-inchers on the DDiS. A new electric power steering system contributes more precise and keener steering.

What it all adds up to is that the Swift continues to live up to its reputation — it's got a game chassis that's not shy of providing some entertaining driving.

The more rigid suspension ensures good roll stiffness but when you're pushing there's just enough body lean to warn you of the approaching limit — but not enough to spoil your fun. And it's forgiving if and when you take the occasional liberty. The brakes are well matched to the performance, with bigger ventilated discs up front to keep you in control during brisker driving bouts.

To top it all, the Swift also rides well; its suspension deals smoothly with our crumbling UK roads — even larger potholes are managed impressively. On better finished roads such as motorways it makes long journeys feel like short ones.

Not only is the Swift one of the cleanest cars in the supermini sector, with emissions of 109g/km for the DDiS diesel, but road tax is just Ł20 a year and insurance group 8E. Given ever-rising motoring costs, this offers real peace of mind to anyone who needs to pay their motoring costs out of their own pocket.

All-in-all, the Swift DDiS is a truly likeable supermini, as engaging to drive as it is good to look at. And very reluctant to average less than 60mpg. Now that's what you call 'Happy Motoring' — MotorBar