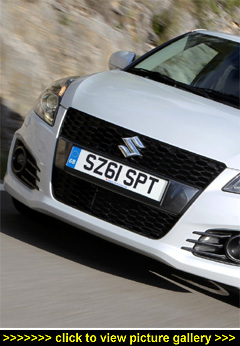 EVEN IF YOU'RE IN A HURRY to buy a new Swift Sport, they won't be in Suzuki dealers until January 2012. The Swift is Suzuki's best selling model range, with around 10,000 sold in the UK every year; to which the Sport versions will add another 1,000. The new three-door Swift Sport runs a 'warmer' 1.6-litre VVT petrol version that puts out 134bhp.

Justifying the price increase — approximately Ł1,500 — between the new Swift Sport and the outgoing model is the development of the 1.6-litre engine which now has more power and torque along with a 10% improvement in fuel economy and CO2 emissions. It also now gains another gear — a new six-speed manual 'box replaces the previous five-speeder.

And, in addition, the Sport comes with an improved specification and a retuned suspension for a more compliant and comfortable ride. The strengthened suspension was honed in the UK on Yorkshire's challenging rural roads and road surfaces. And while the previous Swift Sport was built in Japan, this new generation for Europe is built in Hungary.

The new Suzuki Swift Sport 1.6-litre 'warm' three door hatchback arrives on our UK roads in January although the prototype cars have already visited Britain. They were used on Yorkshire's notorious winding and undulating rural roads with odd cambers and broken road surfaces to fine-tune the revised and strengthened suspension to provide a more compliant ride than the previous generation model.

And the additional power and torque has been gained without any loss of efficiency — both fuel consumption and tailpipe emissions are now ten per cent better. 44.1mpg is the official Combined Cycle fuel economy with CO2 emissions of 147g/km so road tax is Ł130 instead of the previous Sport's Ł165.

Company car user-chooser drivers will appreciate the 5% saving on BIK — down from the previous 23% to a reasonable 19%. Performance is also up, from a 115mph to a 121mph top speed, and zero to 62mph now also quicker — 8.7 seconds compared to the previous generation's 9.4 seconds.

And there's more good news: not only does the slick new six-speed manual 'box benefit from triple syncro cones but the overdrive characteristic of its top gear reduces engine noise at motorway cruising speeds as well as improving fuel economy. Because of the high-revving engine, Swift sport drivers will enjoy getting to know it well.

The Swift Sport's bodyshell is constructed of high-tensile steel for greater rigidity and strength — and it's also a little lighter, with knock-on benefits for economy. Of major importance is the new Sport's vastly improve ride comfort and the compliance offered by the revised and strengthened suspension. Suzuki's engineers have improved the rebound rates of the springs (using variable rate bushings which are firmer at the front and softer at the rear) and this has resulted in a more comfortable ride and, for the driver, more predictable handling. Also significantly improved is the steering, which now provides a sharper action with better feedback.

Visually the latest generation Sport is in keeping with it's name: its ground-hugging looks are enhanced by side skirts and large 17-inch alloys wheels filling the wheelarches. Finned fog lamp bezels flanking the lower section of the large front grille also hint at performance. High-Intensity Discharge headlamps featuring a metallic-grey coating as well as new-design rear combination tail lamps finish off the sporty exterior treatment.

The Sport Swift accommodates four people — not five as do the other Swift family members — in four sculptured supportive sports-style seats. Because it's a compact three-door hatch, getting into the Sport's back seats is a bit of a no-goer for tall people but it will be acceptable for more agile youngsters.

The boot is reasonably large for a car of this size (211 litres) and with the rear seats folded there's 512 litres for cargo. An electric catch makes for easy tailgate opening.

Unlike the MINI Cooper and Citroen DS3, the Swift Sport is not option pack and gizmo-filled although some buyers will be expecting more having been 'educated' to expect 'goodies' overkill. However, for them, Suzuki GB is working on it and options for the interior along with exterior graphic packs are a likely future offering, as too is an integrated SatNav.

Cheaper to run but more expensive to buy, this latest version of the Swift Sport serves up sharper handling alongside a far more compliant and comfortable ride. Put through its paces on the mountain roads inland from Barcelona, all these elements promoted themselves well as did the fuel economy — a real-life 41.4mpg and that was being driven really quite hard. Given the official figure of 44.1mpg, that's pretty impressive.

But what impressed me the most was the Sport's ride comfort, its neat and nimble handling and its overall agility. Another improvement worth mentioning is the reduced engine noise intrusion thanks to the new sixth gear.

Driven in a sporty manner — and despite having more power and more torque than the previous Swift Sport — the high-revving engine doesn't quite match the performance or response of equally new, similar capacity direct injection petrol engines. Most of which now employ a small turbo to inject some additional zip into the acceleration and, more importantly, improve the point at which peak torque is served.

The Swift Sport's 118lb ft of torque doesn't arrive until 4,400rpm — far higher than the 2,000rpm of similar capacity Ford Ecoboost and Mini / BMW / PSA Peugeot-Citroen / VW units. For the driver this means constant use of the gearbox to keep the revs up and within the powerband.

Overtaking slower traffic calls for a drop of two or sometimes even three gears and it was not possible to just slip down a ratio from, say, sixth to fifth or fifth to fourth, and press the accelerator to nip past. Suzuki and Honda — both also motorcycle manufacturers — seem to like their petrol engines to thrive and perform in high rev-bands. But because of congested roads, today's customers want more responsive overtaking performance; in other words, having maximum torque in tap at lower engine speeds.

Against? Considerably more expensive than the outgoing version and no option packs. It also lacks torque at low engine speeds — although thoroughly modern to look at and in its handling, the new Swift Sport is a tad 'old-school' in its provision of power.

On the plus side, there's lots to like including better fuel consumption, lower emissions, more equipment, a six-speed gearbox, sharper steering, improved handling, better agility and a much more compliant and comfortable ride. And it's faster. — David Miles