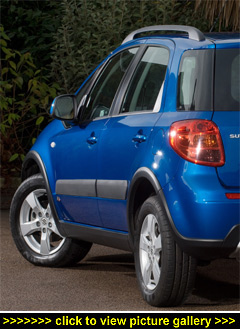 “Now’s a very good time to recall the
last few bad winters and think about
owning a 4x4. A lot of people are —
sales of new SUV/4x4s are one of
only two new car segments in the UK
that are growing...”

LIKE EVERY OTHER CAR, there are expensive 4x4s and affordable 4x4s that won't destroy the Earth or cost the earth to buy or run. Take Suzuki's SX4 crossover — available in SZ3, SZ4 and X-EC specifications with a 118bhp 1.6-litre VVT petrol engine and 2WD or, better still, the SZ5 4WD with either the 1.6-litre VVT petrol engine or the more suitable 133bhp 2.0-litre DDiS diesel.

The 1.6 petrol-powered 2WD models start from a very affordable Ł11,995, rising to Ł13,430. As for 4WD versions, the 1.6 petrol costs Ł14,895 and the stronger-performing 2.0-litre diesel-powered model costs Ł16,695. Responding to the tough sales market, Suzuki has just added the even better specced X-EC variant in time for the September new plate 'surge' and this comes with their 1.6 petrol 2WD drivetrain for just Ł13,430.

Given the fast approach of the winter months, my attention is focussed on their 4x4 models. The SX4's 4WD system is really easy to use and, importantly, gives the driver a choice of options rather than it being fully electronically controlled, sometimes two-, sometimes four-wheel drive.

I prefer to choose what traction mode my vehicle is in but the Suzuki system offers the best of both worlds as it uses intelligent all-wheel drive technology but with three modes: 2WD, 4WD Auto and 4WD Lock — all easily selected by a simple switch.

Suzuki's SX4 is a 'boxy' but still distinctive five-door, five-seater supermini-sized hatch, 4.1-metres long, and 4x4 versions blend the characteristics of a sporty but practical hatch with a tall stance (due to the extra ground clearance) similar to Suzuki's own well respected Grand Vitara SUV.

The latest SX4 models feature a redesigned front bumper and grille together with new-design 16-inch alloy wheels for SZ4 and SZ5 models. A low but rising waistline creates a strong, sporty wedge shape appearance. Pronounced wheelarches and wide front and rear tracks imply stability and good traction, suggesting a potential that is not found in conventional hatchbacks. All 4WD models still have a bold SUV appearance because of the wheelarch extensions, but out of sight are protective side under-mouldings and front and rear skid plates.

Predominantly black, the two-tone interior is highlighted with metallic-coloured accents and wedge-shaped motifs. The instrument panel's ergonomic design ensures that key instruments and controls are intuitive and simple to use.

Important driver information (average and instantaneous fuel consumption as well as driving fuel range and outside temperature) have been relocated from the top centre of the dashboard to directly ahead of the driver in the instrument cluster. The lower centre dash panel incorporates a new display housing the audio, A/C and other controls. For added convenience, the steering wheel audio controls are now illuminated.

Despite its compact size — which makes it easy to drive around town and even easier to park than larger SUVs — the SX4 can still accommodate up to five people along with some luggage. Some hatchbacks are smarter with their variable seating and load carrying options, but the SX4 scores better with me when the 4x4 model option is chosen.

The SX4's rear seats are split 60:40, which means long items can be carried while still seating either one or two rear passengers. They can also be tumbled forward to create an almost fully flat load floor, increasing boot capacity from 270 to a maximum of 1,045 litres.

My test drive Suzuki SX4 (SZ5 4x4 specification) was fitted with the recently introduced 133bhp 2.0-litre DDiS turbodiesel unit that offers good refinement and strong torque (236lb ft) from just 1,500rpm. It's a good engine; relatively refined and quiet, it performs well enough. Top speed is 112mph and the zero to 62mph figure is 11.2 seconds, which is more than adequate.

The signature feature, and for me the main selling point of the SX4 4x4, is the i-AWD facility with switchable three-mode all-wheel drive system that makes it suitable for all weather conditions.

In normal driving conditions in 4WD-Auto mode there's no torque transfer to the rear wheels, so the SX4 effectively operates as a front-wheel drive vehicle. However, the moment any pronounced front wheel slip is detected, torque is automatically apportioned to the rear wheels to give all-wheel traction and improve vehicle stability.

Simple but very effective, which is why I like this particular SX4 model. With one of these in my garage, it would be comforting to know that I'd got the right 'tool' to cope with most winter road conditions. Apart from a small boot (for a five-seater) and the fact that some other diesels have lower CO2 emissions, the SX4 impresses with its compact size and on-demand four-wheel drive. It's also easy to drive; a useful and fun versatile hatchback-cum-crossover for all seasons and most reasons. — David Miles