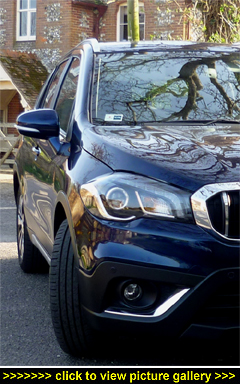 “In 140bhp 1.4-litre Boosterjet spec
and equipped with 4WD and an
autobox, Suzuki’s SX4 crossover
makes the perfect all-round,
all-weather package for those who
like their gears slickly selected for
them both on and off road...”

THE PETROL-DRINKING BOOSTERJET, in 1.4-litre guise, punches out 138bhp and although the autobox does a perfectly fine job when left to get on with changing gears by itself, you can still use the paddle-shifters on the steering wheel whenever you feel like making some manual interventions.

Entry to Suzuki's mid-sized five-seating Crossover couldn't be easier with keyless entry — climb aboard and you'll find yourself in a well-equipped cabin made better by straightforward ergonomics and intuitive switchgear and infotainment systems.

The fascia is nicely tactile with soft-touch finishing while there's enough — but not too much — in the way of chrome highlights and high-end piano black trim. The cabin ambiance is boosted no end by the one-shot, powered, double panoramic glass sunroof — it boasts one of the largest opening areas in its category (560mm), and opens to way back past the front headrests.

No problem, either, if you're driving under the hole in the ozone layer — a quick finger-press on the button automatically closes the opaque inner sunshade for safe, glare-free light. The sporty three-spoker has a good-to-grip leather rim and full multifunction controls for media, phone, adaptive cruise control, and speed limiter, while conveniently close by is the keyless engine Start button.

The heated front seats — upholstery throughout is leather — come with height adjustment and there's a fist-and-a-half of air between the top of your head and the roof lining (easily enough for a real crown!) and fit-for-purpose bolstering that ensures you're comfortably located not just on short trips but on long ones too. Most welcome is the commanding driving position that guarantees a clear view of both front corners — accurate on-road placing of the S-Cross is a given.

Directly in front of the driver is a foolproof set of trad-style instruments with white-on-black markings; set between the dials is a multi-information display. Day and night the central infotainment touchscreen benefits from sharply-defined, easy-to-read graphics and incorporates a Bluetooth integrated audio unit, DAB digital radio, and a rear parking camera view (supported by front and rear parking sensors). 3D SatNav is part of the Comms package and its seven-figure postcode destination input makes setting, and finding, your destination a doddle.

Also worth mentioning is the effective 2-zone automatic AirCon (with pollen filter) — its switches and controls can be used safely on the move with minimal distraction. Talking of safety, an Electronic Stability Program is standard-fit as too is Hill Hold Control and Radar Brake Support, tyre pressure monitoring, auto-dimming rearview mirror, auto lights and wipes, automatic headlamp levelling, heated door mirrors (they're also electrically-adjustable and powerfolding) and power windows.

Passengers with a penchant for privacy may prefer to ride in the rear cabin, secluded behind the dark tinted glass that runs from B-pillar to B-pillar via the rear screen. While they can't be so easily observed, that's not to say they can't see out well enough to enjoy the elevated views through big, long windows — and they sit about six inches higher than those up front.

With nicely contoured adjustable backrests behind them and well padded seats under their thighs, and ample space to wiggle knees and feet, they're very well catered for. Other key elements of the S-Cross's back seat experience are the sloping outer armrests set at just the right angle, a comfy central armrest with built-in cupholders, and door bins that really do hold a bottle.

Parents travelling with youngsters will be able to relax knowing that in addition to ISOFIX anchorages for child seats there are also childproof rear door locks. And, as you'd wish, there's a full set of airbags for your whole tribe: front, side, curtain, and driver's knee.

While there's civilised space for four/five, there's also more than enough room within the S-Cross's 4.3-metre length for their luggage — 430 litres of it with the 60:40-split back seats in use. Drop them and voila! — an instant 875-litre loadbay.

Throwing in some extra versatility is the two level boot floor; there are several inches between 'high' and 'low', and at its upper setting the boot floor sits perfectly level with the load sill while simultaneously creating a 'secret' storage space that's perfect for valuables in transit. And yes, bag hooks there are too.

While roller blinds can be good, some can be fiddly, so it's good to see that the S-Cross makes use of a rigid luggage cover — with a fold-back-on-itself feature, it's convenient and agreeably hassle-free. Loading is equally straightforward thanks to a high-lifting, head-friendly tailgate, also with keyless operation and equipped externally with a wash-wipe — something you don't want to be without on a wet winter's day.

If you prefer to pull your cargo rather than carry it, the 1.4 Boosterjet will tow a braked 1,200kg. And don't forget the roof rails for lesser, flatter loads or watersports equipment and the like.

True to its family-friendly character you'll find plenty of real-world storage solutions starting with sturdy bottle-holding door pockets and a large glovebox, to a drop-down overhead sunglasses holder and a deep box beneath the sliding central front armrest.

Suzuki has a history of turning out zippy and muscular engines that punch above their weight. The new Boosterjet petrol engines are more of the same and, helped by peak torque of 162lb ft on tap from a low 1,500rpm, the 1.4 is a willing performer that's a measurable degree keener than the 109bhp 1.0-litre model — and even more at home on motorways.

Mated to the six-speed autobox it serves up peppy performance with a refined edge. Shifts are well-fettled and the auto is perfectly happy for you to slip it into its manual mode where your fingertips can work the paddle-shifters on the steering wheel's horizontal spokes to enforce your own up/down shift points — useful both off-road and on blacktop when you need to really press on. For the record, you can select M for permanent manual shifting or use the paddles in D for brief interventions for, say, a quick overtake. Left to itself, the autobox makes pootling around town a pretty hushed affair; going with the flow in commuter traffic is a breeze.

Officially the Boosterjet-autobox partnership is good for 49.6mpg — in real-life we recorded an overall test average of 39.8mpg after a week's hard driving over a mix of roads — all kinds from fast 'n' fun to slow 'n' slippery. And quite a bit covered in the naughty-but-nice Sport mode. On paper this S-Cross will hit 62mph from the off in 10.2 seconds and run to 124mph while emitting 128g/km of CO2.

Despite the off-road-ready look and despite an obstacle-clearing ride height, the S-Cross is more agile than you might be expecting — helped by nicely controlled body lean and direct steering. Getting a move on along country lanes and other twisties it feels planted and reassuringly tidy in the dynamics department. While your passengers will feel at ease at speed, they'll also be comfortable and you're unlikely to hear any complaints either on weekly shopping trips or extended half-term holidays.

ALLGRIP, Suzuki's own 4WD system, offers four selectable driving modes. First up is the default Auto, which while automatically sending drive to all four wheels the instant any wheel slip is detected, uses 2WD (to the front pair of wheels) whenever appropriate — generally, that's most of the time.

Next comes Sport mode for, Yes, you guessed it, sporty driving: while keeping the engine 'on the boil', it makes maximum use of the all-wheel drive — engage it for challenging roads and you won't look back.

When things get tricky you can twist the AWD rotary controller immediately south of the selector lever to its Snow setting — it uses four-wheel drive by default and optimises four-wheel drive control in accordance with steering and accelerator inputs to retain traction and stability and keep you on course on unpaved, snowy and other slippery surfaces, both on and off road.

Less used will be the Lock setting. But only because it's designed for extricating the car from snow, mud, or sand — and that's not going to happen very often. Still, it's always good to know you have a 'get out of extremis free card' up your sleeve! In Lock, the system sends high torque to the rear wheels continually while the limited-slip differential helps brake any slipping wheel and transfer torque to the gripping wheels.

And it's good, too, to know that the S-Cross's blend of on-road handling-enhancing and all-terrain crossover grip incorporate the ALLGRIP's 'feed forward' function, which anticipates slippage based on road surface, throttle opening position, steering angle and other factors. So rather than reacting after traction is lost, it allocates torque to the rear wheels before any slippage can occur. Not that you'll ever be consciously aware of any of these behind-the-scenes measures — so far as you'll be concerned, the S-Cross will feel exactly like a grippy, true-blue SUV.

The 1.4 Boosterjet is a practical and likeable multi-purpose 'wagon' for families who travel together — be it for tedious 'chores' such as the school run or active out-of-town weekend getaways off-road. Well specced and well priced, it's well above the average crossover. ~ MotorBar