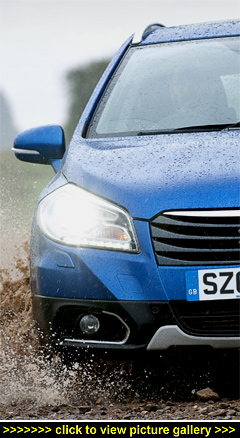 “When the latest SX4, Suzuki’s
five-door compact crossover with
2/4WD, reached the showrooms
there was some unfortunate
collateral damage — the Japanese
brand’s full-blown 4x4 Grand Vitara
took a hit and is no more...”

BUT AS ONE GARAGE DOOR CLOSES so another opens: as the Grand Vitara left the building, the revised SX4 S-Cross waltzed in. Offering five doors in a medium-sized crossover bodyshell equipped with either 2WD or Allgrip 4WD and powered by 1.6-litre petrol or turbodiesel engines (both with 118bhp), the SX4 is the perfect crossover to switch over to.

Since going on sale in the UK towards the end of 2013 the SX4 S-Cross has sold well. Priced from Ł13,999 for the 1.6 petrol SZ3 variant and topping out at Ł25,149, it's well-equipped to compete in the booming SUV/Crossover market that numbers players such as Ford's Kuga, the ASX from Mitsubishi, Nissan's Qashqai (and smaller Juke), Peugeot 2008 and 3008 models, Renault's Captur and Vauxhall's Mokka, to name but a few.

It always seems somewhat illogical to have the SUV 'look' without the matching four-wheel drive underneath although many crossover buyers do exactly that — only to come unstuck when Jack Frost is about. Our test SX4 was the real McCoy in that it was fitted with Suzuki's Allgrip 4WD technology that, added to its 165mm ground clearance, lets you use it on roads other than those covered with tarmacadam.

Allgrip is the newest generation of Suzuki's long-established 4WD technologies and offers the driver a choice of four modes selected using an idiot-proof push-and-turn dial on the centre console alongside the driver's left thigh — Auto, Sport, Snow, and Lock.

Auto uses 2WD by default to optimise fuel economy in typical on-road driving conditions but will switch to 4WD at the first whiff of any wheel losing traction. Sport makes maximum use of 4WD in response to accelerator inputs and at low- and mid-range engine speeds the system alters the accelerator/torque characteristics to optimise engine response and cornering performance — so bring on the twisty roads!

Snowy, unpaved and other slippery surfaces are managed best in Snow mode which uses all-wheel drive, optimising grip in order to enhance traction and stability on tricksy surfaces. Last but definitely not least, the Lock setting is designed for extricating the SX4 from snow, mud or sand.

Looks-wise the SX4 is an attractive blend of crossover and high-riding five-door estate styling; the rounded bonnet runs back to a rising waistline leading into boldly contoured rear shoulders and large tail lamps, creating a rather sporty look enhanced by smart gloss black alloys with machined faces.

Five doors lead to seating for five adults along with a practical and versatile boot/cargo bay. When it comes to luggage and lugging duties the SX4 is more than obliging, providing a generous 430 litres of space in its regular-shaped boot — one of the largest, in fact, in its class. Fold down the seatbacks and this more than doubles to 875 litres.

Additionally, the 60:40-split rear backrests can be set at either of two angles; one is favourably relaxing for passengers while the more upright position creates an extra 10 litres of space in the luggage bay, taking it to 440.

With the seatbacks dropped down the SX4 offers a lengthy cargo bay and, thanks to a knee-height bumper, back-friendly loading. Hooks are fitted for your grocery bags while the tie-down eyelets enable safe lashing of heavier items. Beneath the two-level boot floor you'll find a space-saver spare and should you need to tow then the petrol-powered SX4 will happily pull a braked 1,200kg. Overall the SX4 does the lot — from the weekly shop to weekend trips for the whole family including those involving lifestyle activities.

In full-on passenger mode it also serves up family-themed comfort with a spec that's strong on convenience. Keyless entry, for a start, means no delays getting inside the premium-look cabin — particularly convenient on a wet or chilly day. Internally, the keynote black cabin theme is lightened considerably by silver highlights and the easily-read, blue-bordered dials ahead of the driver.

The well-shaped, high-set (and height-adjustable) front seats are agreeably supportive; their long seat bases providing decent under-knee support and their well-judged bolstering is effective without being intrusive. Upholstered in a smart fabric (black with contrasting centre panels and neat overstitching) they proved to be as comfortable for short shopping trips as for extended long-distance jaunts.

Adding to the ambiance is a good mix of quality trim materials, all put together with the kind of attention to detail that makes for a premium look. The very large sliding glass sunroof creates an even more pleasant cabin 'feel' — it opens past the front headrests and should you ever needed rescuing from a seriously flooded road or river then the sunroof would make the perfect escape hatch! Should you prefer to take your rays diffused then you'll appreciate the one-shot opaque sunblind.

Padded just where your elbow touches, the outer armrests on the front doors are likely to prove popular especially with your front seat passenger, as too will the height-adjustable belts — those riding shotgun alongside the driver can really stretch out their legs without cramping the person sitting behind them. And everybody aboard will be glad of the unobstructed views out.

The fascia is gimmick-free and attractively styled and all switchgear and controls are exactly where you'd expect to find them — the SX4 is one of those cars that you can jump into for the first time and drive away safely without a moment's thought.

When it comes to starting just press the Start button. On the move the driver's display between the white-on-black dials keeps you informed with all the essentials including a rear seatbelt warning and which Allgrip driving mode is currently engaged. The leather-rimmed wheel has remote buttons for operating the cruise control, speed limiter, audio, voice and phone systems.

While some carmakers are going for screens almost big enough to put on your wall at home, the SX4's touchscreen infotainment display set dead-centre of the fascia is sized in keeping with the dash — and it's just right. Full postcode inputs make destination selection a cinch, spoken directions are absolutely clear and timely, the 3D mapping is first-rate and uses excellent colours and, a nice 'fun' touch, you can select an orange car graphic instead of a mundane red arrow to show your SX4's position on the map. One thing you can be sure of: in the SX4 you'll know exactly where you are at all times.

If tidiness is your thing then you'll feel right at home in the SX4: inside there's loads of storage including bottle-holding door pockets (front and rear), a large glovebox, a good-sized storage bin beneath a smoothly sliding adjustable centre front armrest, a drop-down sunglasses case and enough cupholders to go around.

The rear cabin is equally roomy with a third 'porthole' rear side window and clear views out for passengers. Damped grabs in the roof aid entry although most of those sitting in the back will use them to 'strap hang' an outer arm — strange, but plenty of people seem to be doing it these days! Headroom is fine and there's plenty of space for feet and knees along with a well-padded centre armrest (two cupholders are built-in) supplemented by long side outer armrests for when it's just two travelling in the rear. The seats themselves have well-padded comfy bases and the backrest is set at a relaxing angle. No complaints here.

Getting off the line to 62mph takes 12 seconds and the top speed is 108mph; both perfectly okay figures. Another figure that will be valued higher by owners is 47.8 — the official combined cycle miles-per-gallon (39.7 town / 55.3mpg touring). But how realistic is that? Exceedingly: a week's hard driving by MotorBar saw an average of 44.8mpg recorded which in turn shows that most drivers should match Suzuki's official number. And that's more than perfectly okay!

The 118bhp petrol engine gets on with its work without disturbing you or your passengers and is nicely flexible — its 115lb ft of 'grunt' (or torque) delivers responsive acceleration.

In the case of the SX4's five gears, less is more: you don't miss a sixth and you really don't need it either — even on motorways in top gear there's plenty of 'go' without changing down so middle-lane-huggers won't ruffle your feathers.

Gearchanges are smooth and light and the cabin itself is quiet at speed thanks to a relaxed cruising gait that equates to 2,800rpm at 70mph.

With the competent assurance of on-demand all-wheel drive the SX4 is an easy car to drive. The ride is compliant and comfortable on the 205/50 17-inch Continental rubber plus there's plenty of grip during cornering even in 2WD; and no body roll — in a nutshell it goes, steers and stops very reassuringly indeed. It will also do 'all-terrain' and its higher-than-average ground clearance means 'off the beaten track' is a reality rather than just the marketing-speak that appears in the glossy brochures for many 2WD wannabe crossovers.

As the UK's traditionally unpredictable climate becomes ever more unstable, the SX4's Allgrip four-wheel drive brings some much wanted peace of mind to those motorists who can't hide indoors just because it's snowing or Storm Frank has put in an appearance. — MotorBar