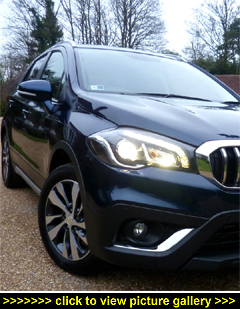 “Behind its new ‘means business’
chrome grille Suzuki’s revitalised
SX4 crossover has a surprise in store
for you — a three-cylinder Boosterjet
engine that’s more powerful than the
four-cylinder unit it has replaced...”

FIRST REACTION? Well, you might think that three pots aren't enough for a family SUV/Crossover. You needn't worry — the direct-injection turbocharged 1.0-litre Boosterjet engine offers the same level of power and torque as a normally-aspirated 1.8-litre; in fact this new 988cc 'triple' serves up 9% more torque than the 1.6-litre petrol engine that previously powered the S-Cross, together with CO2 emissions that are 11% lower and fuel economy that's better by 10%.

All of which adds up to 109bhp and 125lb ft of torque, giving a top speed of 112mph and 0-62mph acceleration from standstill in 11 seconds. With an official combined cycle economy of 56.4mpg and a real-life test average of 45.5mpg running costs are going to be easily affordable; plus there's more good news financially — CO2 emissions of 113g/km mean no road tax to pay in the first year and then only Ł30 from year two.

Just so you know, a more pokey 1.4-litre Boosterjet engine is also available and kicks out 138bhp and 162lb ft from 1,500rpm. Diesel fans can choose a 1.6-litre DDiS unit that offers class-leading emissions (106g/km) and 68.8mpg on the official combined cycle. A six-speed automatic transmission (with a manual mode and steering wheel shift-paddles) is optional on all three engines.

This new-look S-Cross is undeniably more distinctive thanks to its upright front-end styling capped by a clamshell bonnet. Extra ground clearance is always useful for off-roaders even if it's only another 15mm, as it is and which now takes the S-Cross from 165 to 180mm.

New-design headlamps with curvy LED daytime running lights either side of the standout chrome grille sharpen up the image even more — as they understand in Hollywood, a good nose makes all the difference! Polished 17-inch alloy wheels, black wheelarch extensions and silver-finish sills and skid plates further boost road presence.

Swing open the driver's door and you'll enter a smart cabin well stocked with kit and easy-to-live-with ergonomics — thankfully you won't need to swot-up with the handbook before you can use it all. The fascia is soft-touch and there's a tasteful smattering of chrome highlights and piano black finishing plus the three-spoke wheel is usefully multifunction (media, speed limiter, cruise control, and phone) and its leather rim satisfying to grip.

The smart fabric-upholstered seats both have height adjustment (and a fist-and-a-half of headroom so that you can use it!) and bolstering that's fit for purpose; they're also supportive on long trips and the driver can quickly set a commanding driving position — one that lets him/her see both front 'corners' which makes for easy placing of the S-Cross on the road.

Ahead of the driver is a set of straightforward dials with blue perimeter bands and white-on-black markings set either side of a multi-information display that shows all the essential trip information. Night-time switchgear illumination is eye-friendly red while the centrally-set infotainment touchscreen benefits from sharp graphics and seven-figure postcode destination input to make using the SatNav as easy as possible.

Look around and you'll spot plenty of family-sized storage solutions from open storage bins and sturdy bottle-holding door pockets to a big glovebox and large cupholders along with a deep box beneath the sliding centre armrest and an overhead sunglasses holder. Solely for the driver, there's a traditional pull-up handbrake (a long-time favourite despite the less tactile electric park brake buttons that are relentlessly edging them out) and climate control switches that are big enough to be used safely on the move.

For a fistful of dollars (Ł14,999, actually) the entry-level Boosterjet SZ4 offers a lot of car for the money. For a few dollars more (Ł19,499) you can buy the mid-range SZ-T and that gets plenty more must-have items such as keyless entry and start with an engine Start button, dual-zone automatic AirCon (including a pollen filter), rear parking camera, front and rear parking distance sensors, SatNav, and rear privacy glass.

Those travelling in the back of the S-Cross can do so with more privacy courtesy of the dark tinted glass beyond the B-pillars. They sit six or so inches higher than those in front in well cushioned seats with nicely contoured backrests and can choose from two recline settings: one is conducive to lounging; the other more upright to maximise load-carrying by freeing-up an extra ten litres of boot space. Although the roofline slopes noticeably down at the tail, rear headroom hasn't been compromised — surprisingly there's still a full fist of it even sitting upright.

There's also generous space for feet and knees and a well padded centre armrest with two built-in cupholders and outer armrests set at just the right level for comfort, along with bottle holding door bins. All of which makes for a back cabin that really is a relaxing place in which to spend long journeys.

Not only does the S-Cross offer decent room for five, but there's more than enough space within its 4,300mm-long bodyshell for their luggage too — back seats in use, it will easily swallow a generous 430 litres (one of the largest in its class). Drop the 60:40-split seatbacks — the belts stay neatly out of way when folding the rear seats — and the boot expands to a 875-litre loadbay.

Handy too is a boot floor that can also be set high or low (several inches deeper); at the top setting the boot floor is conveniently level with the load sill. Naturally there are bag hooks and ample tie-down eyelets.

The luggage cover is a rigid two-fold item that's notably hassle-free and actually easier to manage than the usual roller blind. The tailgate self-lifts from partly open and rises high so no ducking when you're loading. Good to see a rear wash-wipe — essential for all those days (and there're a lot of 'em) that the UK is rained off.

Despite the off-road-capable look it helps that the S-Cross is more welterweight than many a big butch 4x4, weighing in at just 1,160kg. And while four-wheel drive is always good to have, and can be specified on all three S-Cross models, the front-wheel drive versions have more than enough traction to go with their SUV-esque body styles.

In spite of the additional ride height, with its revised damper settings the S-Cross is an honest handler — body lean is well managed and the steering is direct and it always feels composed even when pressing on along demanding secondary roads. Ride comfort, too, is good enough to ensure you won't hear any whingeing from your passengers.

It might only have three cylinders but you don't have to wring out the 988cc 'triple' to get ahead. It's a refined and flexible performer, helped by peak torque on call between 2,000 and 3,500rpm. Many will be pleasantly surprised by just how quiet it can be pootling around town.

But it has a voice; and one you'll enjoy listening to — stir the slick-shifting five-speeder and work it hard and you'll be sure to hear its delightfully thrummy growl; a trademark aural signature of three-pot engines. At which point you'll be moving pretty quickly because it's willing to pull from low down and keep on pulling until the rev-limiter calls time, which makes its 0-62mph time feel notably quicker than eleven seconds.

The S-Cross Boosterjet's combination of light weight and an eager-beaver engine makes for a fun driving experience. But drive sociably and you'll discover that crossovers can be friends of the Earth too.

A practical and polished set of wheels for 'active lifestyle' families, Suzuki's crossover delivers convenience and comfort for the whole family, be it for day-to-day commuting or weekender trips with luggage. Kitted out to a degree that beats the competition and available for sensible money, it's 'a sure thing'. ~ MotorBar