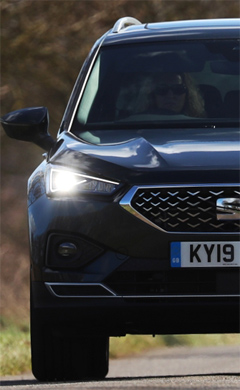 “If your New Year resolution was
to buy a seven-seater SUV then
you’ll likely be glad of a nudge in
the right direction. Hint: try going
towards SEAT; specifically, to
their Tarraco...”

FOLKS TEND TO THINK of SUVs as glamorously cool machines with a jacked-up stance driven by 'loadsamoney' types but actually, if you alter the equation slightly by adding two extra seats to the mix, then those preconceptions quickly fall away because any SUV with room for seven is likely to be a workhorse, albeit a modish one. Which is where the Tarraco comes in — it has 'the look' and all the space and 'toys' you could possibly want.

Like the long-out-of-favour Multi Purpose Vehicles once mandatory for families, seven-seater SUVs are pre-eminently suitable to handle large broods and all that goes with them. SEAT currently has three crossover/SUV contenders and the Tarraco is the largest of its Latin flavoured trio.

First impressions definitely count. There's a suggestion of an Audi Q7 about the Tarraco's hexagonal grille that gives the SEAT a strong and modish 'face'. Slim, tapering headlight units chamfer the front corners and sharply-ironed beltline creases run straight back along the flanks over geometrically-curved, tyre-hugging wheelarches to meet the wraparound taillights. Without recourse to any styling tricks or 4x4 virtue-signalling, the Tarraco's pleasing bodyshape is eye-catching enough to stand out in the executive car park.

More good news: the Xcellence comes with SEAT's Drive Profile system that allows you to switch between Comfort, Eco, Sport, and Individual driving modes. Sport was our default review setting as although the petrol engine has a decent bit of poke (148bhp backed-up by 184lb ft between 1,500 and 3,500rpm) the Tarraco really does feel so much livelier in Sport; not only that but it weights-up the steering too.

Not that you need to drive it any harder just because of that (although it's far sharper for overtaking) and, as far as we could find, there's no major penalty at the pumps either. True, Eco will be more economical, particularly on long motorway runs where it confirms the Tarraco's quiet mile-eating rep, but in its 'fizzier' setting it feels more, well, Sport Utility Vehicle.

Officially, the 1.5 petrol-drinker under the Tarraco's bonnet has a combined cycle mpg figure of 36.2-37.7. Our hard-driven test, with lots of low-gear work on swamped country roads during a very wet week, saw a 39.6mpg average — in normal driving conditions, and with a 'normal' pilot at the helm, there's no reason why a mid-forties number wont' be the norm.

The engine itself is a turboed four-pot and is pleasingly muted; even when pressing on a bit it's never intrusive and when its in the cruise there's barely a murmur. It's also well suited to the role it was made for — hauling a large SUV around. Rowing the Tarraco along is no hassle courtesy of a clean-changing, six-speed manual gearbox with a slick action (a seven-speed DSG box is an option for those who like their gears changed for them). Its power and torque (148bhp and 184lb ft) are enough for it to do its chores faithfully, be they in town, in the 'burbs or out in the sticks. Motorways are loped along nonchalantly.

If you're a holdout diesel fan then you're in luck because the Tarraco can, alternatively, be powered by a 2.0-litre turbodiesel that puts out a matching 148bhp with more effortless pulling power (250lb ft); if you want more oomph then there's an 187bhp version — both diesels can be paired with a DSG autobox and four-wheel drive. Oh, talking of 4WD, you can also have an 187bhp petrol unit with 4WD and DSG.

Inside it's spacious and airy with exceptionally good headroom. There's acres of space up front; the driver and whoever's riding shotgun are well catered for with Sports seats — upholstered in a tastefully smart grey cloth with brown Alcantara, they have manually adjustable lumbar support and remain comfortable even after hours on the road.

Not only will you be sitting comfortably looking down on most other smaller crossover and SUVs but there's some smart detailing such as the deep dual-purpose tray in the centre console with retractable spring-out arms that in a blink conjures up single or double cupholders; a sliding cover closes it off when it's not being used for takeout drinks. Other storage includes a bin under the adjustable central front armrest, a sizeable cooled glovebox, wide door bins that will take large bottles; an overhead glasses case; and a storage tray under the front seat

A large infotainment screen is always a major plus point and the Terraco scores here too with its 'floating' eight-inch, tablet-like touchscreen display standing proud on the central dash. Comms are slick and up to date, served up via the touchscreen — graphics are pin-sharp; menus are quick-responding; and the SatNav's mapping idiot- proof. A proximity sensor means the screen is ready and expecting your fingertip even as it approaches the display.

The mapping can also be shown on the high-resolution colour digital instrument panel which offers customisable configurations for all the driving information along with must-have stuff such as a large road-speed readout. The infotainment side includes smartphone interfacing via Mirror Link, Apple Car Play, and Android Auto, DAB radio, CD, eight speakers, 3 USB ports, Aux-in jack, and a pair of SD card slots.

Today we take it for granted that any new car we buy is safe. The EuroNCAP five-star-rated Tarraco is undoubtedly as safe as any other full-size SUV and it comes with cyclist-aware Front Assist and Autonomous Emergency Braking. Other worthwhile driver 'assists' include lane-keeping (warns you with a 'tightening' of the steering wheel if you drift out of 'your' lane without indicating), Electronic Stability Control, driver tiredness warning, tyre pressure monitoring, plus a full set of airbags including one for the driver's knee.

Additionally there are LED headlamps, daytime running lights, front cornering lamps, Isofix mountings on the front passenger and outer middle row chairs, seatbelt reminders for all seven seats, and in the event of a serious accident unfolding the seatbelts will be pre-tensioned plus any open windows and the sunroof closed. Should there ever be a roll-over then the emergency services will automatically be notified. All very reassuring.

If you're not allocated the front passenger chair it's no big deal because the middle-row seats guarantee you an equally comfy 'business class' trip. There's copious head and leg room thanks to seats that slide in both directions to suit your leg length or for the purpose of tailoring the luggage space. The backrests are reclinable and workaholics using the centre-row can make use of pop-up tables that spring out from the front seatbacks.

Beneath these are storage pouches plus there are dedicated air-outlets that form the third zone of the three-zone climate control. There's also an accommodating central armrest with built-in cupholders and a USB charger so 'working from home' with a cappuccino to hand is eminently doable. As you expect from the Tarraco's large footprint, three adults can sit side-by-side and remain on speaking terms.

Despite its 19-inch machined alloy wheels the Xcellence rides surprisingly fluently, doing a good job of smoothing out road surface imperfections and ridges with enough resolve in the suspension to keep the ride level and settled. On the move the Tarraco feels positive, willing to hold its line and noticeably more sporty than some rivals.

It helps that, being part of the VW Group, it sits atop the same platform underpinning the group's other brands: Skoda's Kodiaq and VW's Tiguan Allspace. While it's a fully-fledged seven-seater the Tarraco changes direction confidently courtesy of its well-managed body control and precise steering that's singing from the same hymn sheet — enough in harmony to make for breezy ground-covering along faster roads.

Like it or leave it, with the Terraco you get seven seats. Most owners will probably leave them slumbering below the floor to take full advantage of the huge boot, but even if you only make use of the rearmost seats occasionally it's still a helpful ace in the hole. When folded out and ready for duty they're usable by slimline adults although best for youngsters. Access to the rearmost seats is easy enough once either of the centre-row's outer seats has been tilted and slid forward.

Built for family life, the Tarraco readily switches to cargo mode — raise the handsfree tailgate, tug the releases to fold seats six and seven into the boot floor, then the levers close to the tailgate to automatically collapse the second row and — Hey Presto! — an almost Airbnb-sized loadbay appears. We kid you not: capable of swallowing 1,775 litres of cargo, cavernous it truly is.

When both rear rows are dropped the resulting load-floor is flat and seamless so sliding large objects in and out is easy. To put its size into perspective, we needed to move a mass of stuff from our storage facility and where before we'd needed to hire a transit we managed the same amount using the Tarraco in just two full loads. And making it all even easier was the powered tailgate.

If you're mix 'n' matching people and stuff then between them the 50:50-split third row and 40:20:40-split second row offer up plenty of permutations to maximise versatility. And although all seven-seaters unavoidably have minimal luggage room when carrying a full seven peeps, on these occasions the Tarraco still reserves a handy 230 litres behind seats 6 and 7.

However, in the most likely-used five-seat mode, with the rearmost pair stowed away under the boot floor, there's still a huge amount of standard luggage space — a ginormous 700 litres of it. And it's all out of sight of prying eyes beneath a smooth-operating rollerblind cover. If all of that is not enough, drivers who prefer to keep their cargo on the outside can tow a braked 2,000kg.

The Tarraco is a fine-looking SUV and any family would be glad to travel in one. Hassle-free to use in town, taking your 'clan' away on a staycation or just doing some 'lifestyle' weekending, the Tarraco manages to make light work of everything. But for all its multi-use competence you'll never be glum travelling all on your lonesome because it's also a decent drive. ~ MotorBar