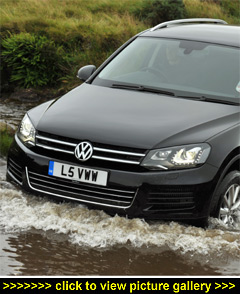 “The Touareg, a so-called legendary
people of mysterious origin —
most likely a Berber ethnic group
of the Sahara — had a very apt
proverb: ‘Better walking without
knowing where, than sitting doing
nothing.’ Substitute ‘driving’ for
‘walking’ and you are very much in
the 21st century...”

FORTUNATELY, DRIVING IN A VOLKSWAGEN TOUAREG, even if you're not sure where it is you're going, is no hardship whether you're crossing a wasteland or finding your way to a restaurant that serves Soondubu in Soho [Try Arang, 9 Golden Square, Soho — Ed].

The latest Touareg, the one that hails from Volkswagen's plant in Bratislava — in the Slovak Republic, not the Sahara — is a step-up from its predecessor: it's roomier, better equipped, lighter and more economical and even better to drive. That's meaningful progress because the original model was itself a worthy alternative to a BMW X5. Pub quiz aficionados will want to know that the plant also turns out Audi Q7s, Skoda Octavias and bodies for Porsche's Cayenne. So relax; they know their stuff!

The Touareg offers a range of powerplants that span the contemporary fuel spectrum from petrol to diesel to hybrid, with prices from Ł38,935 for the entry-level 201bhp SE 3.0 V6 TDI to Ł58,690 for the Altitude 4.2 V8 TDI (the petrol/electric Hybrid 3.0 V6 TSI costs Ł57,100. All Touaregs now come with VW's eight-speed auto tiptronic transmission and grippy four-wheel drive. We 'got to grips' with the uber-clean 236bhp Ł40,195 SE 3.0 V6 TDI BlueMotion model.

The sharper-suited new Touareg now has a new face — one that, refreshingly for a SUV, is not in the least 'in your face'. The new front-end owes its lines to the so-called Volkswagen design DNA established by the Golf MkVI. And very handsome it is too, the new Touareg looking leaner despite actually being physically larger.

If you're harbouring the thought that that 236bhp isn't quite 'manly' enough to haul the two-tonne Touareg around, you need to focus on the torque — 406lb ft of it kicking in from 2,000rpm. Enough to do the job with one arm tied behind its back. Not only does the new eight-speed auto 'box handle the considerable torque with aplomb, but it does so while effecting seamlessly fast shifts.

Pressing on, there's a delightfully purposeful sense of the Touareg slurring resolutely through the eight gears as each consecutive upshift slips seamlessly into the next. Don't take our word for it — just look at the figures: 0-62mph in 7.8 seconds (that's exactly what a Range Rover 4.4 TDV8 takes).

Staying with the comparison, this V6 TDI Touareg tops the Range Rover's maximum speed by 5mph, at 135mph. Top speed is reached in sixth; seventh and eighth act as overdrive gears that not only save fuel but reduce cruising engine revs — at 80mph, the V6 TDI will be spinning at a lazy 2,200rpm. And whatever speed you're travelling at, the Touareg remains quiet, refined and feels reassuringly stable.

Pull away and you need to go easy on the accelerator or you'll quickly find yourself over the limit before. Once rolling, the V6's breadth of performance is impressive with a delightfully flexible performance spread. It's easy-going and economical for no-hassle driving but wake it up with the loud pedal and it's instantly alert and ready to.

More good news: the Stop/Start works unnoticed. After the first twenty minutes behind the wheel most drivers will be totally unaware of it — apart from the money it saves them at the pumps. The same goes for the regenerative braking system.

Dynamically, this remastered Touareg is a much more composed behemoth. Body lean is kept tightly in check and it can surely hustle — in fact it feels agile in a way you simply wouldn't expect from a full-blown SUV. And proves it by its unruffled stability through tight bends, which are taken flat 'n' fluent. Try it in Sport mode! The brakes — substantial ventilated discs all round — scrub off speed with equanimity and if you need to anchor seriously hard, they're always there for you.

Cushioned damping — it's too compliant to be called 'soft' — contributes to the Touareg's notably fluent ride. The speed sensitive steering's aptitude is another satisfying surprise = it's light yet accurate and makes placing the Touareg precisely on the road a doddle.

In a Touareg, 'off-road' is never more than the press of a button away — select the appropriate setting and the Touareg's software preps all the electronic systems (ABSPlus, stability and traction control, hill descent, tiptronic gearbox, etc) for rocking 'n' rolling in the rough.

Combined with long wheel travel, practical approach and departure angles and good ground clearance, the Touareg's off-road abilities are, for the average owner, well in excess of what will ever be needed. For those who take their off-roading seriously, Escape versions offer a heavier-duty 4x4 system above and beyond the stand 4Motion — 4XMotion.

Physically larger but lighter, the Touareg remains a genuine five-seater — not everybody wants, or needs, seven seats apart from those unlucky enough to be designated school runners. As far as passengers go, the 40mm-longer wheelbase means more space all round but, chiefly, masses of extra leg room in the rear cabin; those sitting in the back can stretch out in genuine comfort. Making matters even better are adjustable backrests on the rear seats and a wide centre armrest.

In the front, the dash is cleanly laid-out with centre-stage taken by a superb new eight-inch, colour touch-screen SatNav with 3D mapping so there's no chance of you missing a thing — or of driving 'without knowing where'! And just to be sure, the voice-activated navigation includes seven-digit postcode search functionality and displays the surrounding area with 3D landmarks. Other touch-activated features include radio, media, phone, climate and car functions.

Between the crystal clear, anti-reflective (and backlit by white LEDs) main dials — and better than most rivals' SatNav screens — is a seven-inch colour display that shows a wide range of information from various self-explanatory and colour-coded menus covering navigation, audio, telephone and trip data. First class detailing with chrome filleting to the switchgear adds to the upmarket ambience.

And not only is the cabin well kitted-out and well insulated from the outside world but wherever you sit you'll be seated in big, supportive well-shaped chairs (with, on the front seats, well-judged built-in lumbar support) that keep you comfortable on even very long journeys.

The front seats benefit from long squabs that provide excellent under knee support and another appreciated feature are the button releases in the side of the headrests for height adjustment — so much easier than the usual nail-breaking catches found on most headrests.

Underlining the thorough attention to detail is the large glovebox that's not only cooled and lockable but has a special compartment for glasses which is coated in a soft material to prevent scratching. And there's ample storage space throughout the cabin, so keeping the interior clutter-free is easy.

The high-up driving position is easy to get just right thanks to generous steering wheel adjustment and height-adjustable front seat belts. Individual front centre armrests are a nice touch; they glide forward by up to four inches so the driver and front passenger can position their armrests independently.

There's no traditional handbrake to get in the way, either — an electronic parking brake (with auto-hold) does the same job, only better. Adding to the cosiness are brilliant three-stage heated front seats and an especially efficient 2Zone climate control system.

As with the best customer-savvy SUV/Crossover vehicles these days, the Touareg's rear seats can slide fore and aft through six inches so you can juggle leg room with load space. The rear luggage blind also earns brownie points — for easier access or to accommodate taller items it can be slid up towards the roof. At 580 litres the boot is more than big enough, but fold the 60:40 split rear seats and you have a house-moving 1,642-litre load bay that's as flat as Essex. More thoughtful load bay touches include a stainless steel load sill protector strip and a large load-through hatch along with handy elasticated straps for keeping smaller objects secure and upright.

As mentioned earlier, the Touareg is lighter and more economical. Officially, cruising motorways can see as much as 43.5mpg — commendable for a fast heavyweight 4x4. Urban use is given as 32.1 and combined as 38.2mpg. During a hard-pressed week on a mixed bag of roads, we recorded an average of 33mpg.

So if you're feeling hard done by because you need something big and practical then cheer up — Volkswagen have good news for you. For a start, there's more than enough room to make even just sitting in a Touareg BlueMotion doing nothing enjoyable; and more than enough driveability to banish those SUV blues. — MotorBar