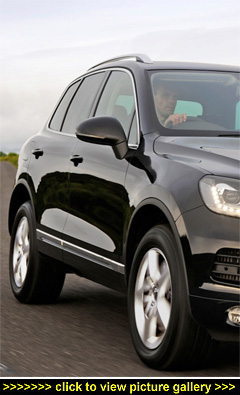 “Hybrid and 4x4 don’t have that
easily-wedded ring of ‘horse and
carriage’ — probably because
up until very recently hybrids were
only to be found in mainstream
family cars such as Honda’s Insight
and Toyota’s Prius, where petrol
engines working in conjunction
with electric motors are designed
to raise fuel economy and reduce
CO2 emissions...”

And now VW has seen the light and joined the hybrid league — its recently introduced, latest generation, large 4x4 SUV, the Touareg, can now be bought with a petrol-electric powertrain.

Above the SE are Escape and Altitude specifications (for the 3.0-litre diesel-engined versions; the V8 TDI only comes in Altitude trim). The Hybrid has just one trim offered — and that provides a very high level of equipment. Touareg prices run from Ł40,155 up to Ł59,580; the Hybrid costs Ł57,970.

Defined by clean styling lines, the latest Touareg draws inspiration from the design direction established by the most recent Golf and Polo models.

And while they're lower and appear sleeker, the new Touaregs are larger than the previous models — 40mm longer in wheelbase and overall length. Offsetting that, it weighs over 200kg less and is up to 20% more fuel-efficient. However, unlike some large SUV competitors with seven seats, the Touareg remains a committed five-seater.

The load space is huge: 580 litres with the rear seats in use; 1,642 litres with them folded away. Due to the battery pack under the load floor, the new Hybrid has slightly less — but it's still way more than enough: 493 litres and 1,555 litres respectively. All Touareg versions have a practical and usable braked towing weight of 3,500kg.

While it can effortlessly out-accelerate many hot hatches through its combination of supercharged 328bhp 3.0-litre V6 TSI petrol engine and an electric motor generating 46bhp (a total output of 374bhp) with a substantial 427lb ft of torque, the Hybrid principally uses its combination of petrol and electric for power and drivetrain refinement.

Despite a zero to 62mph time of 6.5 seconds and a top speed of 149mph, the Touareg Hybrid is officially capable of returning 34.4mpg in the combined cycle while emitting 193g/km of CO2 from its tailpipes. Road tax is Ł445 for the first year, reducing to Ł245 for the second and subsequent years.

Business users will appreciate the lower CO2 figure because it means a Benefit-in-Kind tax bill of 28% — a little less than the 3.0-litre diesel versions and 7% lower than they'd fork out for the 4.2-litre V8.

Fuel economy varied considerable during my Hybrid test drive — from 19.2mpg commuting in and out of towns to an overall average of 24.9mpg after some long runs, including motorway journeys. But even that was still short of the official Combined Cycle's 34.4mpg.

The Touareg may be large but, thanks to its new lightweight construction, it's also a comfortable and agile 4x4.

The high-up stance guarantees excellent visibility and at both low in-town stop-start speeds and during acceleration on the open road, the petrol-electric drive system is remarkably flexible and smooth.

An automatic stop/start function is standard and, mercifully, this is very fast re-starting the petrol engine as the battery is always being topped up by regeneration or energy recovery.

The electric motor can operate independently of, or together with, the petrol engine, and there's a constant shuffling of power to all four wheels from both sources.

Depending on the flatness of the surface, pulling away quite often happens in electric motor mode only before the engine takes over as speed increases. There's an electric-only mode which can, for instance, be selected for a stealthy pull-away so as not to wake the neighbours on early morning starts.

I should mention that much of the smoothness and progressive power delivery is down to the eight-speed automatic tiptronic transmission that's standard on all models. And the maximum speed of 149mph is actually achieved in sixth gear — seventh and eighth are overdrive ratios that help with fuel economy. For example, cruising at 50mph calls for just 1,200rpm; and even at the UK's 70mph legal motorway limit you'll see less that 2,000rpm on the rev-counter.

Against? Only seats five, expensive to buy and, despite hybrid power, real-life fuel economy cannot match the official figures or the fuel economy of the 3.0-litre diesel Touaregs.

On the plus side you get a highly-specified, large, classy 4x4 with power and performance that's competitive with the 3.0-litre diesel models for road and company car tax although not for fuel economy.

At present we have two hybrid camps: hybrid use for fuel economy and hybrid use for extra performance. Make no mistake, the Touareg Hybrid is firmly in the latter camp. — David Miles