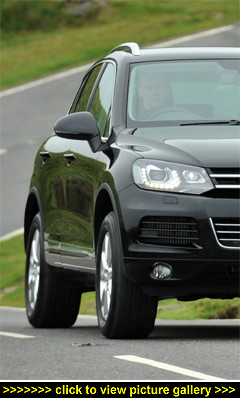 “The new version of Volkswagen’s
Touareg is in the showrooms now
so early purchasers can buy one
before the price goes up in January
due to the increase in VAT...”

THE ALL-NEW VERSION maintains all the virtues of space, comfort, refinement and off-road and towing ability that have made it relatively popular in a conservative sort of way. The latest Touareg benefits from lightweight construction and more fuel-efficient engines and, for the first time, offers a hybrid variant. Prices range from Ł38,255 to Ł56,530.

Despite being lower and thus appearing sleeker, the new Touareg is physically larger than the previous model — 40mm longer in wheelbase and overall length it may be, but it weighs over 200kg less and is up to 20 per cent more fuel-efficient.

The drive for more efficiency is highlighted by the new 3.0-litre V6 TDI diesel and Hybrid petrol/electric models as well as the standard fitment of a new eight-speed tiptronic gearbox.

Expected to be the volume seller is the 3.0-litre 236bhp TDI that returns 38.2mpg on the combined cycle while emitting 195g/km of CO2 to place it in VED band J which is Ł425 for the first year and then Ł235 annually

The yet-to-arrive Hybrid model can out-accelerate many hot hatches with a zero to 62mph time of 6.5 seconds through its combination of a supercharged 3.0-litre V6 TSI petrol engine developing 328bhp and an electric motor generating 46bhp resulting in a total output of 374bhp and 428lb ft of torque. The Hybrid is also capable of returning 34.4mpg on the combined cycle while emitting 193g/km of CO2.

All diesel Touaregs, apart from the V8, are badged as BlueMotion Technology models and feature a number of economy-enhancing features including battery regeneration (recuperation or energy recovery during braking phases) and a Stop/Start function.

A choice of advanced new options is available including a driver's assistance pack which incorporates a range of features such as Lane Assist, Side Scan and Area View, as well as dynamic air suspension and air-conditioned seats.

A brief test drive in the best-selling Touareg SE 3.0-litre 236bhp V6 turbodiesel with the eight-speed tiptronic auto transmission showed the all-new version will be enjoyed in many ways. The extra interior space is most welcome; the engine is strong and responsive; and the eight-speed auto 'box seamless in operation.

The 38.2mpg combined cycle fuel economy is another bonus. The smart new looks are still conservative and that, too, is a plus feature given some of the brash looking offerings in this sector. The latest generation Touaregs are easily identified by the new, sharply-styled VW family 'face' they wear, pioneered with the latest Golf and Polo passenger cars.

Where Volkswagen excels these days, in addition to fuel-miserly engines and transmissions, is in their first class handling characteristics with fine lightweight floorpans and well-sorted suspension settings which combine for sharp handling but still with a comfortable ride. This model, priced at Ł38,255, will be the pick of the bunch and it is a very decent, big and imposing SUV. — David Miles