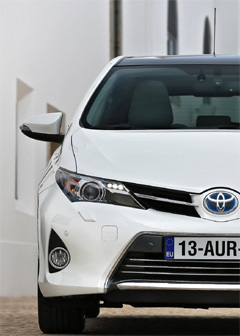 “Car journalists have a bad habit of
hunting in packs. When they sense
weakness, they all go on the attack.
And the first-generation Toyota Auris
was the very definition of a slow-
moving target. Why? Because it was
extreme: extremely average, that is...”

WELL I'M GOING TO hold my head above the parapet. I ran an Auris diesel for a year, and I thought it was an amazingly good companion: spacious, economical (I averaged over 50mpg) and fun to drive. Fun? Yes: in 180bhp SR180 guise, it was not only rapid but it also cornered like a hot hatch. Seriously.

So I was far more interested than most of my colleagues to see how the new second-generation Auris would perform.

It didn't start well when I first clapped eyes on it. If the old Auris looked dull, the new one is full-on bland — which is surprising as the Auris was designed for Europe and is built in Derbyshire. But hey, it's still more interesting to look at than a VW Golf.

It's launched in five-door hatchback form only, with a Touring Sports estate following in Summer 2013.

Four engines are offered initially: 1.33-litre and 1.6-litre petrols, a 1.4 diesel and the Hybrid, the latter using the petrol-electric drivetrain from the Prius. Since the Hybrid is the best-seller in the range (priced from Ł19,995), that's the model I tested.

The Hybrid is all about emissions, and with a CO2 figure of only 87g/km, it looks very tax-efficient for company car drivers (10% BIK), and means exemption from VED and the London Congestion Charge. Fuel economy of 74.3mpg is impressive, although I averaged a rather more down-to-earth figure in the mid-40s during my week with the car.

That undoubtedly had a lot to do with the number of motorway miles I did; while the Hybrid is remarkably economical in town, it's far less so on the motorway. You're probably better off with a diesel if you're doing lots of long journeys.

The Hybrid is fitted with Toyota's CVT automatic, which works superbly around town, but as soon as you plant your foot on the accelerator it holds the engine at constant and very high revs, which sounds raucous and horrid, especially up motorway inclines.

Like the Prius, the Auris can run in electric-only mode for very short distances at speeds up to 31mph. The transition from electric to petrol, or combined hybrid, is seamless. Undoubtedly, the Hybrid is at its best in town where it's refined, easy to drive and economical. It's not super-quick, but a 0-62mph time of 10.9 seconds is decent enough.

You won't buy an Auris for the sharpness of its handling or steering — other cars do that much better. But too many rivals these days sacrifice ride comfort for handling, and here Toyota has been careful to get things right.

Indeed, the Auris really soaks up those potholes and speed humps. The steering is much lighter than, say, rivals from the VW Group, but it's far from bad, with decent feedback through the steering wheel.

Speaking of the steering wheel, both it and the rest of the cabin are well finished, but sadly the subjective feel and look of the plastics is below-par, and certainly not a patch on the likes of Skoda, Renault and VW. There are too many hard, shiny surfaces for my liking, added to which some of the controls seem scattered across the dashboard.

It is, however, very easy to get comfortable behind the wheel thanks to the wide range of adjustment for the seats and steering column.

And the Toyota Touch & Go multimedia system, with its bright graphics and intuitive menus, works superbly.

Space up front is very good, but it's rather less generous in the rear, where a lack of headroom could affect you if you're tall. The boot is decently sized for a car in this class, although the hybrid powerplant does impinge on space somewhat.

The Auris is competitively priced (from Ł14,495), pitching it into Hyundai i30 territory and undercutting the Volkswagen Golf. It's well-equipped, too, with seven airbags, AirCon, Hill-Start Assist, heated door mirrors and iPod/MP3 connectivity as standard. — Chris Rees