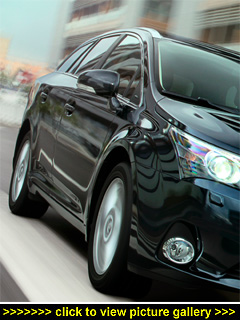 “Could the Avensis be the world’s
most boring car? Before you think
I’m being overly harsh on the
big Toyota, that could actually be
regarded as an accolade, rather
than a criticism...”

THE AVENSIS HAS ALWAYS had the reputation of being dull, but equally it has a reputation for metronomic reliability and ergonomic excellence.

And now it's had a mid-life facelift for 2012: styling tweaks, extra equipment, chassis changes and, for the 2.0-litre diesel engine, lower emissions and better fuel economy.

It's still not what you'd call the most dashing car in the world, but it's definitely an improvement. I-Spy car-spotters won't need me to tell them that the facelifted model's lights and bumpers are different.

If you're a current Avensis driver, the cabin will have a very familiar look to it. The front seats offer better lateral support, but that's about it. The feeling remains very much that of a practical, spacious workhorse: the interior is well screwed together but it's hardly an Audi in terms of feel or plushness.

What it is though, is well-equipped. For instance, satellite navigation is standard on the TR grade and above, neatly incorporated into Toyota's clever Touch & Go multimedia system.

All the important new stuff happens under the skin. Since most buyers opt for the 2.0- litre D-4D diesel engine, that's the version we've tested. The 124bhp powerplant has been updated to improve fuel economy, thanks to changes to cooling, lubrication and new low-rolling-resistance tyres.

Previously, the Avensis returned 53.3mpg on the combined cycle but that's now gone up to an impressive 61.4mpg. In reality, in mixed driving on motorways and in town, I achieved mpg in the upper 40s.

It's also slightly quieter than before, thanks to extra insulation material, and has better torque response at low speeds courtesy of a new, lower-friction turbocharger. The other engines in the range (1.8 petrol and 2.2-litre diesel) are carried over unchanged.

A more rigid body and modifications to the suspension make the handling a tad crisper, although again it's no BMW in this department. But the electric power steering now has a higher ratio, so it does at least feel more direct.

Crucially, the 2.0 D-4D engine now emits 14% less CO2. That's particularly significant for the Avensis's main target market: the sales rep. Now that this big car slots into the 120g/km CO2 band it should have a whole lot more appeal (17% Benefit-in-Kind and road tax of Ł30 a year). Longer service intervals also allow Toyota to claim the Avensis delivers the best pence-per-mile cost in its class over three years/60,000 miles.

But even private customers shouldn't discount the Avensis. It's got a five-year, 100,000-mile warranty (one of the best in the business) and Toyota consistently comes out as one of the most reliable car brands around.

Here's one final piece of information that might just dispel the Avensis's 'Mr Boring' image. Toyota is fielding three Avensis models in the 2012 British Touring Car Championship. Driven by Frank Wrathall, Tony Hughes and Adam Morgan, the BTCC cars are based on the latest facelifted Avensis. And, like the road cars, the race cars are produced at Toyota's Burnaston factory in Derbyshire... all very interesting, I think. — Chris Rees