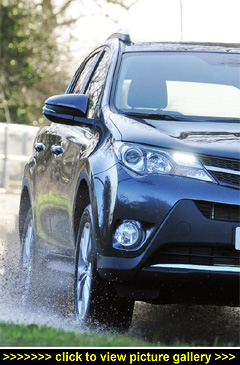 “Toyota’s fourth-generation, five-
door RAV4 still retains, in most
versions, its traditionally capable
4x4 qualities — but the all-new
design offers a more modern and
sophisticated look, an upgraded
interior, better comfort and more
space for little or no more money...”

THE DESIGN OF THE LATEST RAV4 has been developed in response to evolving customer requirements targeting couples and families with active lifestyles who value more space and versatility rather than buyers who want a practical and durable 'workhorse'. In the UK sales of SUVs, particularly lower-CO2 tax-efficient 2WD models, are now in demand from users who want smart, comfortable and better equipped models.

The new RAV4 is, of course, still a global vehicle so it really is a case of one size and style has to fit all market requirements. The latest RAV4 now follows the 'softer' coupe side profile design theme adopted for most five-door compact SUVs ranging from the older Vauxhall Antara and Chevrolet Captiva models to the new Honda CR-V, Mitsubishi ASX, Hyundai Santa Fe and Mazda CX-5 sport utility vehicles.

It has become the norm to see RAV4s used as family-cum-workhorse transport in rural areas, but the new 'softer' approach is likely to see them being driven more in urban environments and, perhaps, towing caravans and boats rather than stock trailers and horse-boxes.

Depending on the engine and transmission chosen, braked towing weights range from 1,500kg for the petrol automatic and 1,600 to 2,000kg for the diesel-powered models.

The latest version, in 4WD form, still retains its high ground clearance and all-terrain capabilities courtesy of its on-demand all-wheel drive system which varies the amount of drive to the wheels with most grip and which has 4WD lock and descent control facilities. Only now it's dressed up in a posher suit of clothes that make it look more sophisticated.

The suspension has been re-tuned to give a more compliant, controlled and comfortable ride with improved stability, and the steering is also sharper. And there is now the choice of Normal, Sport or Eco driving modes in line with the fact that the latest RAV4 will spend much more time on motorways than it will on country lanes or off-roading.

The RAV4's smart grille and sleek headlights are in keeping with Toyota's new corporate style. The side profile features a coupe-look rising waistline and a roofline that drops slightly to the rear. For the first time there is a top-hinged tailgate rather than a side-hinged rear loading door. Prominent rear light clusters flank the wide opening tailgate. All of which makes the latest RAV4 look larger and more imposing than its 4.7-metre body length implies.

On the top specification Invincible version I tested the tailgate was electronically operated although frustratingly slow in operation. Unfortunately there is no spare wheel offered — not even as an option — so there is more storage space beneath the large load area floor. Personally, I'd rather have a spare wheel!

The boot space with all five seats in use is an accommodating 547 litres, but fold down the rear seats and this increases to a huge 1,746 litres — ideal for carrying sports activity equipment, family luggage or transport aids for the less mobile.

The new model's interior has grown noticeably; it's now very roomy and looks impressive. The seats are comfortable and elevated so the visibility is generally much improved although the rising waistline to the rear corners does restrict rear-quarter vision.

Black trim dominates but the quality looks and feels more up-market, particularly the leather upholstery which is standard-fit on Invincible versions. The array of instruments is very comprehensive and well laid out, and adds to the refinement offered by this new generation RAV4.

Unfortunately the Touch & Go Plus navigation system with voice control and enhanced traffic information costs another Ł1,250 even on the top spec version, which took my test model up to a costly Ł31,000.

Going down one grade to the Icon variant, with the same size engine and auto 'box, knock the price down to a more realistic Ł27,605 and this would be my choice.

The main powerhouse for the RAV4 is Toyota's 2.2-litre, four-cylinder turbodiesel engine with 148bhp and maximum torque of 250lb ft available from 2,000rpm. Changes to this unit over previous versions include an aluminium cylinder block, revised balancer shafts (to reduce noise and vibrations), friction-reducing roller-bearing rocker arms and a resin cylinder-head cover (reduces fuel injector noise).

Together these changes have resulted in better fuel economy and lower CO2 emissions. In the case of my automatic test car, the official fuel economy has gone from 39.8mpg to 42.2mpg while CO2 has been reduced from 186g/km to 176g/km which in turn has lowered road and company car tax charges. Road tax is now Ł335 for the first year, reducing to Ł220 for the second year onwards.

My week-long drive in the real world covering motorway and local journeys and used in the Eco mode only resulted in an average of 35.3mpg — acceptable, but not outstanding.

The engine and the six-speed auto 'box actually worked well together, offering good engine response even in the Eco mode and it was generally quiet and smooth. Top speed, not really relevant, is 115mph, and the acceleration from standstill to 62mph is good enough at 10 seconds.

With vastly improved on-road driving ability, a much more compliant suspension giving better ride comfort and suppressed engine noise intrusion, the latest and more spacious RAV4 might have lost its rugged 4x4 character. Good news, because it's now more in sync with what the majority of today's customers really want.

Against? No spare wheel or even the option for one, top version as tested looks expensive, and for those who find 'Invincible' a pretentious model name there's always de-badging!

Visually and ride-wise the RAV4's 'gone soft', but underneath the fashionable skin the drivetrain, durable suspension and construction should maintain its hardcore off-roader capabilities for whenever they're needed. — David Miles