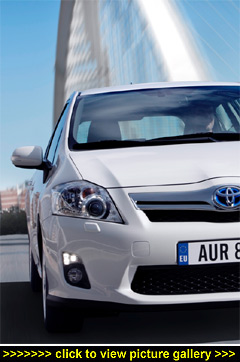 “Mainstream hybrids in the form of
the Toyota Prius, the Honda Insight
and Civic Saloon will be joined from
1 July by the new British-built Toyota
five-door hatchback Auris Hybrid...”

THE AURIS HYBRID IS THE FIRST FULL HYBRID TO BE BUILT IN EUROPE and it is built in Britain at Toyota Manufacturing's Burnaston plant in Derby on the same production lines as the Auris five-door petrol and diesel models and the Avensis saloons and Tourer estates.

Toyota GB expects the UK market to buy around 8,000 Auris Hybrid cars in a full year — roughly the same number as the larger Prius Hybrid. Prices range from Ł18,950 for the well equipped T4 model with 15-inch alloy wheels to Ł20,700 for the T Spirit version which has 17-inch alloys as standard plus other nice-to-have items of equipment. Seventy per cent of UK customers are expected to go for the T4 version but with the optional Ł250 extra-cost 17-inch wheels.

These bigger wheels not only look better by filling the wheelarches but they sharpen up the handling of the vehicle; providing more front end grip, less understeer and reduced bodyroll, all thanks to the low-rolling resistance tyres.

Whichever model is chosen, the tax savings will be considerable. With CO2 emissions as low as 89g/km with the smaller wheels (and almost as low at 93g/km for the larger ones) and with 74.3mpg in the combined cycle for the smaller wheels (70.6mpg for the larger ones) both choices mean zero road tax. And for those living in, commuting to and from or just visiting London, the Auris Hybrid is Congestion Charge free.

As for running costs, the official combined cycle fuel economy is 74.3mpg (or 70.6mpg with the 17-inch wheels). Servicing costs are also lower; there are less moving parts in the Hybrid Synergy Drive (HSD) petrol-electric-CVT transmission powertrain: there is no conventional starter motor or alternator, the variable valve timing petrol engine has a maintenance-free timing chain, there are no drive belts, the electronically-controlled braking system reduces wear and the high-pressure tyres wear significantly less and have better durability than conventional ones.

Furthermore, residual values are predicted to be highly competitive, as they are with the Prius, and as for the daily operating costs of the new Auris Hybrid, Toyota GB claim they will be the same as for their Yaris supermini range.

The Auris Hybrid has a three-year/60,000-mile warranty for the whole car with the hybrid system extended to five years/60,000 miles and the battery cover extended to eight years/100,000 miles although it is actually expected to last the life of the car. A good indicator for the Auris Hybrid's reliability is that the similar Prius Hybrid has five times lower warranty costs than any other Toyota model. All in all, the Auris Hybrid makes sense in almost all ways for the cost-conscious, environmentally-aware UK customer.

It is essentially the same technology as the Prius: fuel-efficient, 1.8-litre four-cylinder petrol engine with variable valve and injection timing with electric motor, generator, electronic control unit and a battery mounted under the boot floor and drive to the front wheels via a power splitter and a shift-by-wire CVT auto transmission. In combination, the 1.8-litre VVT-i petrol engine and the electric motor produce a maximum 134bhp, giving nought to 62mph acceleration in 11.4 seconds and a top speed of 112mph.

When the driver switches to EV (Electric Vehicle) mode, the car can run emissions-free on its electric power alone for up to 1.2 miles at speeds of up to 30mph, according to the level of battery charge and driving conditions.

The electric motor is powered by the hybrid battery and works in tandem with the petrol engine to boost acceleration during normal driving, but in EV mode it alone powers the driven wheels — a unique feature of Toyota's full hybrid system.

During deceleration and under braking, the electric motor works as a high-output generator to effect regenerative braking. This recovers kinetic energy (that would usually be lost as heat) as electrical energy for storage in the high-performance battery.

Over the course of any journey, Toyota's Hybrid Synergy Drive operates in different modes to maximise overall vehicle efficiency. When the car comes to rest, the petrol engine stops automatically to conserve fuel. In low-efficiency conditions, such as at start-up and low- to mid-range engine speeds, the vehicle automatically runs in EV mode using just its electric motor and thereby eliminating CO2 and NOx exhaust emissions.

Under normal driving conditions, the source and allocation of power is constantly adjusted between the engine and electric motor to achieve the best performance with maximum fuel efficiency.

The level of battery power is constantly managed via an engine-driven generator, which means there is no need for the battery to be recharged from an external source. In addition to Auris Hybrid's NORMAL drive mode, the driver can select three further 'on-demand' modes — EV, ECO and POWER — to increase driving efficiency, fuel economy and performance.

From start-up and at speeds of less than 31 mph in NORMAL mode, Auris Hybrid will automatically adopt EV mode to run on its electric motor alone depending on the level of battery charge and the prevailing driving conditions. EV mode can also be selected manually.

We already know the Toyota HSD hybrid system works very well because it has been proven with the Prius. Putting the same system in a smaller, family-sized hatchback is a sensible move for customers who want that size of car.

In real-life driving in the mountainous roads in Spain and on the very congested city roads in Barcelona, the Auris Hybrid worked well; in the slow moving traffic driving into Barcelona the test car returned 60mpg and it maintained that figure during our tour of the city using some engine and EV alone modes and without any sympathetic use of the accelerator. On the open road I briefly saw 72mpg at best and 51.6mpg at worst for the mountain route driving session.

The car is not perfect; it can be sluggish, with the CVT transmission seemingly dulling acceleration on the open road; the smaller wheels allow too much understeer with little front end cornering grip; and the high sidewall of the tyres promotes bodyroll in corners. Specify the 17-inch wheels and the package is much better in the handling department.

While it's not cheap to buy (quite close, in fact, to the price of the larger Prius Hybrid), the only out-of-town driving thrill you'll get will be saving money. However, you'll also benefit from tax-busting opportunities, lean-green-and-clean motoring with more gains for commuting drivers and London residents. The Auris Hybrid is also a family-friendly size with a good specification and overall makes an interesting and valuable addition to our low-cost motoring options. — David Miles