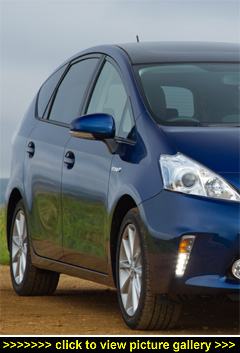 “Toyota’s Prius+ is a petrol-electric
hybrid using the same Hybrid
Synergy drivetrain as the standard
Prius hatch but with the addition
of two extra seats, making it a seven-
seater MPV — all in a bodyshell
that’s just 5.3 inches longer than
the standard Prius hatch...”

THE PRIUS+ ALSO OFFERS extra front and rear headroom plus more interior width. Unlike the standard Prius hybrid the Prius+ uses a compact new lithium-ion battery pack which sits between the front seats and not under the load area floor, which leaves room for a proper spare wheel.

The new Prius+ seven-seat hybrid MPV may be less expensive than the five-seat Prius Plug-In but at Ł26,195 it doesn't come cheap to purchase, so it could be too much for some private buyers.

However, because of its low tax penalties, company car users and businesses are likely to be the prime users in the UK. The Prius+ is available with two trim levels: the T4 has CO2 emissions of 96g/km (no VED road tax, 10% Benefit-in-Kind company car tax and, for now, no London Congestion Charge).

The second Prius+, the higher specced T Spirit, costs Ł29,495 and uses the same 98bhp 1.8-litre petrol engine in tandem with the 81bhp electric motor in use with all other Prius models.

But because of the added spec, larger 17-inch wheels and so on, the CO2 emissions go up along with the purchase price.

The CO2 figure is 101g/km, road tax still costs nothing for the first year but you'll pay Ł20 per annum for the second year onwards. Company car tax is 11% and the London Congestion Charge will have to be paid.

Fuel economy for the T Spirit is 64.2mpg (for the T4 it's officially 68.9mpg). So the Prius+ T4 is therefore the most sensible and cost-effective version to run.

In addition to having seven seats arranged in three rows as standard, the Prius+ offers several seating and boot/load space options.

The only slight issue is the higher loading height for the cargo area. The height of the Prius+ MPV over the Prius hatch has been increased by 110mm, to 1,600mm while the overall length is 4,615mm, making it relatively easy to park with good visibility thanks to the traditional high-mounted (and comfortable) seats.

The wheelbase has also been extended (by 80mm) to accommodate the three rows of seats, and it's also 30mm wider. For added ease-of-use the middle row has three individual seats which can be folded; or they slide fore and aft independently.

The comfortable, user-friendly interior and massive load space with seating/load-carrying combinations makes the Prius+ a good family carry-all vehicle — but the purchase price will be a 'put-off' for some, unless the compelling nature of greener hybrid power outweighs the added financial cost.

Less mobile and Motability customers will find the Prius+ seriously worth their consideration because of the ability to carry mobility aids and the comfortable easy-to-get-into-and-out-again cabin-style seating.

However, the most likely users will be businesses because of the Prius+'s tax and potential fuel saving features, and for promoting the perceived 'green eco' credentials of the business.

For the company car driver, the vehicle can be a roomy load-carrier during the week and a frugal-to-run family 'bus' at the weekend.

And even if the family unit has few or no children then the load area can accommodate all manner of cargo or sports and recreational equipment.

The Prius+, like all the other Prius family members, is exceptionally easy to drive. It uses the usual fuel-efficient petrol 1.8-litre petrol engine with electric motor with drive to the front wheels via a CVT auto transmission.

The small joystick gear selector lever just has D (to go forward), R, N, and B — to select a lower gear for going downhill when engine braking is required.

The driver can also select one of three push-button driving modes: Power, Eco and EV. Only the latter requires explanation: EV allows the Prius+ to run in electric power-only mode but it only offers a very short driving range — of around 1.2 miles — before the engine cuts back in. Normally the vehicle will pull away (and if parked on the flat) in electric drive before the petrol engine seamlessly takes over.

A push Start button brings the Prius+ to life: instruments then light up, select D or R, release the foot-operated parking brake, press the accelerator… and away you go.

Accelerating hard, the CVT transmission holds on to the engine revs for too long so the power unit sounds noisy and stressed. And it's the same going up a hill — the CVT changes down and the noise goes up. There was also more road noise intrusion into the vehicle than I expected.

Once in the cruise, though, and on smoother road surfaces, the Prius+ provides a relaxed and comfortable drive. The suspension is on the hard side but the comfortable seats offset that.

The upside is that the firm ride setting means little body roll during cornering and little fore and aft pitching during braking and acceleration, both good for passenger comfort. The steering, although offering little feedback, is actually well weighted.

My test, using motorways, country and town roads averaged 52.4mpg. This was no better than a diesel-powered MPV and on top of that the Prius+ hybrid is more expensive to buy, albeit you'll pay less in motoring taxes if you drive a Prius+.

Reasons to buy one include roominess and comfort, well equipped, low for tax costs, and the large load space. Not so good is that it's expensive for retail users, the engine and CVT transmission are noisy under load, the suspension is firm and there's road noise intrusion.

The Prius+ MPV is a logical and worthwhile addition to the expanding Prius hybrid family. Compared to other medium to large MPVs with conventional diesel and petrol engines, it's more expensive to buy but then it's notably 'greener'. And it's also the only seven-seat MPV on the market which offers CO2 emissions below 100g/km. — David Miles