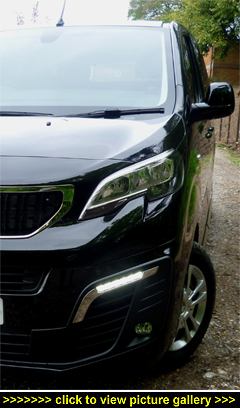 “What defines a practical people-
carrier? Seven seats? Eight?
How about nine? If it’s nine, then
you need look no further than
Peugeot’s new Traveller...”

IN THE WORDS OF AN UNKNOWN admirer in Sherbourne Waitrose's car park, the new Traveller is 'one mean-looking people-carrier'. We agree. In top VIP trim you can truthfully call it a luxury shuttle, but whatever you pigeonhole it as won't alter the fact that it's the French brand's best multi-people-mover yet.

Moving down the flanks to the tail there's no attempt to prettify the clean-cut sides although the colour-coded bumpers, door mirrors, door handles and rubbing strips plus 'embossed'-look wheelarches and privacy-glazed glasshouse add plenty of Men In Black menace.

Our take is that the high-gloss black finish of our test car suits the Traveller to a T. The alternatives include Aluminium and Bianca White as well as Dragoon Blue and standout Amber Red metallic. It's your call — just how snazzy do you want to be?

When it comes to size, the Traveller offers three body lengths: Compact (4,606mm); Standard (4,956mm); and Long (5,309mm). Essentially these provide increasing amounts of luggage space from the Compact's maxed-out 3,397 litres to the Long's whopping 4,554. Despite the physical measurements, the good news, if you're going to be the one doing the parking, is that even in its lengthiest format the Traveller is nowhere near as bulky as its rivals.

Inside it's every bit as vast as its external bodyshape promises, with adult seating in all three rows; the front row seats — double front passenger plus driver — are accessed through XXL doors with a double step up while seats four through nine are reached via massive sliding side doors. Clearly Peugeot has designed the Traveller to appeal to buyers looking to transport not just families with kids, but all-adult parties too.

Peugeot's BlueHDi turbodiesel powerplants are the only kind you'll find under the Traveller's short bonnet. However, there are four power outputs to select from: 95/115bhp 1.6-litre; 150/180bhp 2.0-litre. Travellers may be big but they're far from being gas-guzzlers: at the end of a hard week's testing on Dorset's highways and byways, the 115bhp 1.6's average came out at 45.1mpg against its official 54.3mpg. Emissions of 137g/km mean an annual Ł130 road tax bill from the first year onwards.

There are two Traveller 'Business' specs: Business, and Business VIP — which comes loaded with premium goodies such as a full leather interior, keyless entry, hands-free electric sliding side doors, electric and heated front seats with massage function, individual rear seats, panoramic sunroof, and a head-up display for the driver.

There are also two versions of the Traveller — Active and Allure — aimed squarely at private motorists rather than the Business versions. Of course, there's no reason at all why you can't choose from all four to get the spec and price package that's best for you.

Our entry-level Business model came with the dual front passenger seats that make it a full-blooded nine-seater. The driver gets a drop-down Captain's armrest, and seat height and lumbar adjustment along with a shapely well-padded chair and a commanding driving position that offers brilliant visibility even rearwards through the deep, full-width back screen.

The two front passengers share a simple but nonetheless comfy double bench (a no-cost option), and while there's not a whiff of leather in the cabin — not even wrapped around the rim of the flat-bottomed steering wheel — the two-tone fabric upholstery looks smart enough and is skin-friendly whatever the outside temperature. Owners who don't read the handbook will likely miss finding the useful (and usefully big) locker accessed by lifting up the front passenger's seat base cushion.

At 1.9 metres tall — so standing higher than Arnold Alois Schwarzenegger — the Traveller's high roofline caps plentiful headroom in whichever row you happen to be sitting. Along with wide-open views out, the inner scenery isn't bad either with quality fit-and-finish. Both front passengers and the driver can access the 7-inch touchscreen infotainment display set top-dead-centre of the dash — intuitive to use, it features Mirror Link and Car Play for smartphone connectivity, a DAB radio, and Bluetooth handsfree and media streaming; plus there's the essential USB and Aux-in ports.

Good, too, to see that the infotainment screen is mounted level with the main instrument cluster so that a quick sideways scope keeps you in the loop without needing to take your eyes off the road ahead long enough to miss anything important.

Other nice touches the driver will appreciate include the very clear digital speed readout in the trip computer display between the main dials, a high-set and easily-to-hand gearlever and a traditional pull-up handbrake. Large cupholders are sited at each end of the fascia top — actually a very sensible place for them. Also handy is the large open storage bin sunk into the centre of the upper fascia. Useful too are the pair of gloveboxes — there's a lidded upper one and an open lower one.

The entry-level Business version's seat tally makes nine thanks to three-seating 1/3:2/3-split benches in rows two and three. The dark-tinted side windows are fixed but the AirCon is pretty efficient, so not a problem. The easy-sliding side doors are big enough to have come from a Cold War nuclear bunker, but they do make getting in and out a simple and stoop-free manoeuvre.

Passengers travelling in either of the two rear rows enjoy generous headroom and decent foot- and knee-room along with far-reaching views through the large window panes — while very dark seen from outside, from the inside looking out they appear to be just lightly tinted.

The benches are fixed in the Business model but other trims offer sliding rear seats for balancing out legroom between rows two and three without diluting boot space. For the record there are Isofix mounting points for all six rear seats. The VIP trim level's rear doors are power operated — not that having to work them by hand is a problem because they slide and latch smoothly.

Reaching the third row is equally easy as the outer seat double-folds forward to provide easy step-through access. And unlike seven-seater people-carriers, all three rows of seats in the Traveller will accommodate six-foot adults whereas the third row in seven-seater MPVs are generally only adequate for youngsters.

The 'Standard' length Traveller's boot space measures a useful 507 litres from the floor to the top of the third row seatbacks. However, loading all the way to the roof gives you 655 litres with all the seats occupied; and although it doesn't look that deep, it is a tall space and cases can be stacked vertically.

Incidentally, the backrests in rows 2 and 3 can be folded down flat but if you don't object to some manual labour and have somewhere to store them, you can remove the second and third rows completely — taking out just the third row gives you a maximum 2,228 litres for cargo; removing the middle and rearmost rows makes for a truly cavernous load area of 3,968 litres!

Helpfully, on other versions the rear rows fold and slide, which offers more load/people permutations. For the record there's a full-size spare wheel mounted externally beneath the boot floor and the huge tailgate opens up 90-degrees to sit horizontally level with the ground and does a fantastic job of keeping off the rain — and with a knee-high load sill handling cargo is about as easy as it can get. Towing is no problem either, with the Traveller easily able to pull a braked 1,800kg.

For a people-carrier the Traveller is impressively car-like to drive — and it feels smaller on the road than its size leads you to expect. Once behind the wheel you'll be heartened by the reassuring and well-mannered handling dynamics: the steering is fit for purpose and will keep the nose pointing true along twisting secondary roads.

Getting the best out of the 115bhp unit is easy thanks to both the 221lb ft of torque as well as the six-speed manual 'stick shift' being a willing changer. And when you need to 'stop' rather than 'go', the all-disc brakes bite strongly.

Actually, we were pleasantly taken aback at just how agreeable it is to drive — if you're used to a car then you'll love the elevated driving position; not only is it a major safety 'plus' in traffic but every journey is infinitely more interesting not least because you can see over most walls, fences and hedgerows.

On the motorway it never feels short of 'puff' or composure and is more than happy to go with the flow. And away from smooth A-road blacktop, even third-rate roads don't rattle its ride which is helped by 'cushioning' 65-profile tyres (215/65 16-inchers). It's also easy to park courtesy of effective door mirrors and rear parking sensors.

Whatever the reason — business or pleasure — that you need nine seats, Peugeot's new Traveller is 'the biz'. Unexpectedly good to drive, it's easy to live with and, should you go for the upper trim levels, you and your passengers will enjoy limo-like transportation the like of which is hard to come by elsewhere. ~ MotorBar