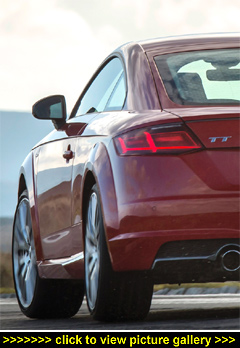 “First deliveries of the all-new TT
2+2 Coupe commenced last month,
in November 2014 — those wanting
a topless TT or one of the 310bhp
TTS Coupes will have to wait
until March 2015. Prices for the
Coupe start at Ł29,770 and rise to
Ł35,335; Roadsters are expected
to be just over Ł2K more expensive.
And the price for the TTS has been
confirmed as being from Ł38,900...”

THE VERY LATEST TT follows the same styling theme: the same rounded contours but with more edgy and sculptured styling lines, fronted by a R8-style face that makes the Coupe look more muscular. Whereas outgoing models had a bias towards female drivers, Audi thinks the bolder design of the new versions could shift the bias back towards men.

Thanks to its hybrid body construction — a space frame and the VW Group's latest MQB midsized platform constructed of a blend of steel and lightweight aluminium — the new TTs average some 50kg lighter than the last generation. Combined with uprated and cleaner engines (the latest models have more power, more torque, and lower CO2 emissions) they deliver improved fuel economy.

Okay, the price has gone up — by on average Ł2,000 more than the models they replace. However, the specs are better, particularly the high-tech cockpit which is based around a 12.3-inch high-resolution LCD screen that completely fills the instrument binnacle and replaces traditional analogue dials while including the SatNav display.

Physically, the 2+2 Coupe is 4,177mm long (almost the same length as its predecessor) but its wheelbase is actually 37mm longer — although that has not added very much in terms of rear seat space for adults. The load area has also gone up: by 13 litres to 305 litres, and can be increased to 712 litres by dropping the rear seat backrests.

At launch the available powerplant choices are between a 2.0-litre TFSI, 230bhp turbocharged direct injection petrol engine (that comes either as a front-wheel drive/six-speed manual 'box combo or with quattro all-wheel drive driving through a six-speed S tronic automatic) and a 184hp 2.0-litre TDI Ultra turbodiesel with front-wheel drive and a six-speed manual gearbox. Two levels of trim are on offer: Sport and S line (available with both engines and the quattro option).

During my test drive in Scotland — where the roads were awash following the recent 'monsoon' rainfall — I had the longest driving spell in the 2.0-litre TDI Ultra 184hp coupe. At Ł29,770, this is the cheapest model in the line-up and it is expected to be the best-selling version with company car user-chooser customers attracted by the lower tax implications.

Emitting just 110g/km of CO2, road tax is zero cost for the First Year and then only Ł20 for the following years. And that all important Benefit-in-Kind tax penalty for company car users is a relatively modest 18%. Officially, this model will return 67.3mpg in the combined Cycle and on our fast but careful test driving event over winding, mountainous Highland roads the real-life figure was 51.1mpg — very impressive given the lively performance.

Some people might argue that diesel power and sports cars don't mix but real-life performance says otherwise. Top speed is 150mph and zero to 62mph takes 7.1 seconds. With 280lb ft of torque on tap from 1,750rpm, the accelerative response is immediate from low to high speeds and yet it remains flexible in high gears in slow moving traffic conditions. The six-speed manual 'box is really slick and fast to use; the front-wheel drive delivers plenty of grip even on rain-soaked roads; and the MQB platform (one of the best available today) serves up balance and poise.

As always the advice with Audi models, because of their generally firm ride, is to stay with the standard-sized wheels and don't go for the sports suspension option — the standard ride is firm enough; the sportier choices make it less appealing — comfort-wise — to live with.

A very brief spell with the 2.0-litre TFSI 230bhp turboed direct injection petrol engine with front-wheel drive added just a bit more zip but not much else. This high-revving unit delivers 273lb ft from 1,600rpm so it's responsive enough. Top speed is limited to 155mph and zero to 62mph takes just six seconds.

Officially the fuel consumption is 47.9mpg running on standard-sized wheels and on a brief test we recorded 35.4mpg. The all-important CO2 emissions are 137g/km so road tax is Ł130 every year and Benefit-in-Kind tax 20%. The price of this version with the Sport specification is Ł29,860 (that's Ł90 more than the turbodiesel version) and the running costs are higher as well — hence the popularity of the 2.0-litre TDI.

I also managed to squeeze in a short spell behind the wheel of the 2.0-litre TFSI 230bhp quattro version that's priced from Ł32,785. Whilst the quattro all-wheel drive can distribute 100% of the driving torque to either the front or rear wheels for added traction, the front-wheel drive TT models are so grippy and well balanced that spending even more money on the quattro version without any more engine power seems hardly worthwhile.

Top speed is restricted to 155mph and because of the standard-fit six-speed autobox, zero to 62mph is faster, at 5.3 seconds. Fuel consumption is 44.1mpg but just 27.6mpg on test and because CO2 emissions go up to 149g/km road tax increases to Ł145 and company car tax to 22%.

Inside, the new high quality, high-tech cabin is outstanding. Quite the best I've seen this year — and that includes the BMW i8. The TT's cockpit design may have evolved but it is still fully targeted at sports driving. Overall it's a beautifully crafted interior. There are now circular ventilation vents which cleverly include the controls to adjust temperature, air distribution, air conditioning and all the other functions which normally clutter up the console and fascia.

Topping it all is the brilliant 12.3-inch high-res LED screen positioned right in front of the driver where the conventional instruments usually sit. Drivers can choose between two displays: in 'classic' view the speedometer and rev-counter are displayed in the foreground whereas in 'infotainment' mode the virtual instruments are smaller and the space that becomes free provides ample and clear room for other functions and information or warning signs and, in particular, the navigation map.

This new info panel really is brilliant and just part of a new generation of fascia and control panel designs which no doubt will be rolled out to other Audi models and, I suspect, to many other brands in the future.

The TT's rear seat space has always been small — it still is; and the launch range of engines deliver efficiency (low running costs and taxes) rather than outright performance. That aside, these new third-gen models are a pleasing evolution of an iconic design. The beautifully designed cabin comes with a new virtual instrument panel, it's easy to live with and good to drive with plenty of grip for non-quattro versions. Another classy new Audi then. — David Miles