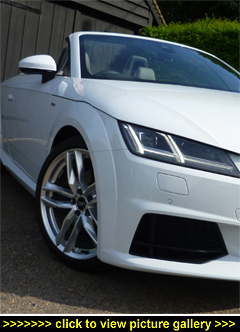 “Audi’s TT is on a roll — not, we
hasten to add, in the handling
department, but on the sales field.
Demand for the brand’s cars has
never been higher. Drive one —
any one of their 50-model range —
and it’s easy to see why they’ve
outstripped BMW, Jaguar and
Mercedes. And with another
scorching summer in full swing,
the third-generation TT Roadster
is good to go...”

STILL UNMISTAKABLY A TT, it now wears a sharper, more edgy 'suit' and is fronted by an R8-look nose — it's a look that unmistakably hints at its more aggressive character and the increased power and handling dynamics underpinning the striking Bauhaus-esque bodywork.

Under the slim clamshell bonnet lives one of the best turboed 2.0-litre TFSI engine's around, spitting out 226bhp backed up by a muscular 272lb ft of torque from 1,600rpm — and it's not shy about showing what it can do. Whatever speed you're travelling at, lean on the accelerator pedal and you'll get a really hard shove back in the seat — yet it's totally tractable in the worst traffic.

Out on the open road, overtaking slower traffic is a breeze (literally!) and there's the ever-welcome bonus of the aural theatre provided by the exhaust: a deliciously whoomphy burble that hardens to a snarly bark at the top end of the rev-band. An effortless cruiser at high speed, in the UK it spins at just 2,000 revs at the legal limit — the redline, incidentally, doesn't arrive until 6,750rpm…

Acceleration through the six gears is delivered in a delightfully potent linear surge made even more seamless by the sporty S tronic twin-clutch gearbox. Power is laid down through all four wheels and, in combination with this engine/gearbox set-up, will get the Roadster off the line and passing the 62mph post in an invigorating 5.6 seconds. Road permitting, you can top out top-down at an electronically limited 155mph.

Of course, at any time, and at any speed, you always have the choice of flicking the selector into Sport and dictating the change points with your fingertips via the steering wheel-mounted paddle-shifters. For this level of performance you might expect to be penalised at the pumps but a week's keen driving recorded an average of 33.1mpg — not bad at all given the official combined figure of 40.9mpg because we were hoofing it some.

Boosting the appealing performance is the fluent manner in which the TT conducts itself when not on the prod — a comfortable ride in the 30mph zones is enhanced by its ability to manage low speeds with no sulks or shimmies. Yet, just beneath its 'boulevardier' veneer you can sense that the Roadster is always primed, ready to lunge eagerly forward when you step on the loud pedal. No fear about using your right foot in the wet either, because the sure-footed quattro four-wheel drive serves up seemingly never-ending grip on both dry and slippery surfaces.

Some reviewers criticised the previous generation TT for not being a Porsche Boxster — forget all that because this new TT is not just good, it's persuasively good. But what the TT does best, and in spades, is style.

Nowhere is this better demonstrated than in the superbly crafted cockpit. It's a visual knockout and Audi's designers have done a magnificent job endowing the minimalist look with high-tech and charisma in equal measure. The pičce de résistance is the new 'virtual instrument' pack.

Gone are the handsome traditional analogue dials, replaced by a pin-sharp 12.3-inch high-resolution LCD digital display filling the space beneath the single hooded cowl previously occupied by the superseded instrument pack. Directly ahead of the driver the new full-width screen incorporates doppelgänger speedometer and rev-counter dials digitised on a backdrop of navigation maps and infotainment displays.

What's so likeable about this user-friendly display is that you can change things around to suit — for instance, if you're using the SatNav then you can shrink the virtual speedometer and rev-counter, maximising the 3D mapping and making room for other driving information and graphics. All switched by the driver on the move in the blink of an eye. Not only are the two dials crystal clear white-on-black items, but helpfully there's a digital mph readout within the speedo and the currently engaged gear is shown in the rev-counter.

Settle in the superbly cosseting and supportive low-slung Super Sports seats — upholstered in fine grey quilted Nappa leather — and it's blatantly clear that a very ardent driver designed the cockpit to engage other very keen drivers. The power seats adjust every-which-way: the backrest bolsters can be pulled in or opened out for a custom fit; the front edge of the base extends forward for extra under-knee comfort and support; and the equally important lumbar support can be adjusted up and down as well as in and out. Roof raised, near six-footers will enjoy a fist of headroom and, along with a left-foot rest that's spot-on, there's masses of foot room — we even drove several hundred miles in hiking boots without a hitch.

Well-considered touches are everywhere, from the engine start/stop button to seatbelt guides on the seats' outer shoulders (so no awkward twisting to find the belt before buckling-up). Plus Audi's multimedia interface is truly foolproof to use — the navigation's destination input is a doddle and spoken directions are refreshingly unmistakable.

MMI Touch adds to the tech-fest — the top of the master rotary MMI control is a touch pad that lets you input written numbers, figures and even symbols and, using your fingers as you would on a smartphone, zoom in/out and scroll maps as well as search within the navigation, telephone, car and media menus. Or you can just stick to the equally easy and quick MMI shortcut buttons. For webistas, Audi Connect takes you online with access to, among other things, Google Earth's maps and street views.

Particularly appreciated is the 'favourite' button on the very flat-bottomed steering wheel (one that leaves plenty of room for elbows). We set ours to the drive select system that lets you, on the fly, change between Auto, Comfort, Dynamic or your own personalised Individual driving mode that you've 'tuned' for the level of traction and dynamic handling you like the best.

And then there's the Efficiency setting. Essentially this enables the TT to freewheel when easing off the accelerator by cutting the drivetrain 'drag'. However, the instant you touch the throttle or brake pedal drive instantly re-engages so you're never coasting out of control. If you like your power but also like to save fuel, Efficiency is the mode for you.

Other striking cabin 'jewellery' includes the stand-out circular air vents. All five have three controls incorporated into their beautifully crafted architecture: the outermost ring controls direction; an on/off slider sets how much air you get; and the small central rotary control/button manages the three-stage neck heating as well as the three-stage seat heating. The three central vents sitting side-by-side on the dash work the same way but their central switches control the A/C on/off and blower speed; the auto mode and temperature; and recirculation/manually-set distribution ie; face, feet, etc. Very smart both visually and logically.

A core element of the TT Roadster's appeal is, obviously, its powered folding fabric roof. First off, it's fast — 0-10 seconds from fully closed to fully open and neatly folded away out of sight or vice-versa. That's quick. You can even close it one the move (up to 30mph) if caught in a sudden downpour with no safe place to pull over. Watch out though for the effect that doing this has on other drivers!

Top down, passenger or driver, the Roadster is a great place to be. With the side windows up you can kill any draughts or turbulence behind your head and neck with a push on the powered glass wind-blocker switch.

Even at the seriously fast cruising speeds of which the 2.0 TFSI is capable, topless refinement is good, with negligible buffeting. And for those scrumptiously crisp autumn nights — one of the best times for top-down driving — there's 'neck scarf' ventilation built into the seat that blows warm air onto the back of your neck.

The TT's roof demands no compromises — it's made of a material that reduces noise and is designed to keep out the cold. With the roof up the Roadster's cabin is nigh on as quiet and refined (and, on cold days, cosy) as its fixed-head Coupe sister. Another big plus: the drop-top's boot space remains the same regardless of whether you have the roof open or closed — 280 litres.

The boot itself is unexpectedly long and of a fair depth. In addition you'll find a storage tray beneath the boot floor and (another nice touch) a sturdy, well-tailored ski-bag for use with the load-through hatch into the cabin. Talking of storage space, those shorter than six-feet tall will have room behind their seatbacks for a squashy weekender bag.

The TT's all-wheel drive can, when required, distribute 100% of the driving torque to either the front or rear wheels and its variable torque split between the front and rear wheels always delivers the optimum amount of grip. From the driving seat the Roadster feels hewn from a single metal ingot and reassuringly solid; body control is impressive.

Dynamically it's quick, well balanced and wieldy, helped by the lighter (steel and aluminium) hybrid body construction of the VW Group's highly rated MQB modular platform that underpins these latest TT models. On average they're some 50kg lighter than the previous generation cars. The steering is sharp, responsive and well-weighted; the potent brakes will shed speed as fast your right foot can conjure it up. All of which makes the Roadster an entertaining drive whenever you feel in the mood for a perfectly legal adrenaline hit.

This latest incarnation of the desirably iconic TT stands alone; it needs no comparison with other premium convertible sportcars because it is what it is — and it's perfectly comfortable with that. Drive one and you will be too. As is becoming increasingly obvious, the only way is Audi! — MotorBar