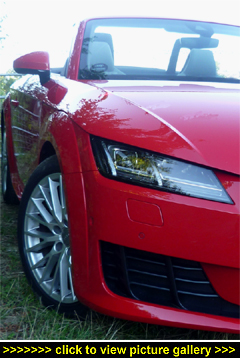 “Driving in Audi’s TT Roadster with
the top down is like being in the eye
of the storm — however wild the wind,
you’re always snugly insulated from
it and in full control...”

ADDICTIVE FUN but when it's time for the top go back up it couldn't be more user-friendly — press the 'roof' button and ten seconds later you'll be as snug as if you were travelling in one of the roadster's fixed head coupe siblings. Not only that, but the top can be powered up and down while you're on the move — perfect for those spoilsport sudden showers…

The latest generation Roadsters still carry that instantly recognisable Bauhaus DNA that so strikingly marked out the TT when Audi first launched the iconic sports car range; but now they're honed even sharper — with its chiselled lines the drop-top radiates a focused, ready-to-rumble stance. And not only does its aerodynamic bodywork look great but it also generates a best-in-class drag coefficient.

Power choices range from a super-efficient 177bhp right through to a rip-roaring 394bhp (in the TT RS). That noted, it's the unleaded-drinking 2.0-litre TFSI petrol that's the most popular engine bay filler, especially as it can be had with either front-wheel drive or Audi's renowned quattro all-wheel drive and with either a slick six- speed manual or sporty paddle-shift dual-clutch S tronic six-speed autobox.

If you're happy to run with a diesel then the 2.0-litre TDI Ultra version is gutsy enough to deliver a respectable 0-62mph time of 7.3 seconds and still reach 150mph — the payoff is an official combined cycle consumption figure of 58.9mpg.

But it's the blown inline four-pot 2.0 TFSI petrol we've been putting through its paces. Zero-to- sixty-two is sorted in a smidgen over six seconds (6.1 to be precise) and top-down you could top-out at an autobahn-friendly 155mph. However, these headline figures don't tell the whole story because in the real world this Audi 2.0-litre is one of the best turboed engines around.

With 226bhp backed by a meaty 272lb ft, it's a delightfully flexible unit that serves up eager thrust from low revs to the tune of a thrummy exhaust signature that sounds even better the faster you go. Increase the pressure of your right foot and you'll enjoy a seamless surge of acceleration whatever your starting speed; wafting past slower traffic is a blast, particularly so if you flick the selector lever into its Sport mode first — if you do, you'll probably leave it there for the remainder of your journey! If, however, you're just pootling along in traffic, it's impressively well-mannered; as it is, too, in the cruise with relaxed numbers on the rev-counter at the UK's legal limit.

So, is there a sting at the pumps? Our week's pretty ardent driving saw an overall test average of 35.8mpg on the trip computer (officially, the combined cycle figure is 43.5mpg); drivers with a penchant for more cruising and less bruising should hit the big Four Oh easily enough.

The 4.17-metre-long Roadster may have a compact nose-to-tail footprint but when it comes to inner space, its cabin is unquestionably liberal. Adding to the sense of space is a streamlined cockpit that artfully blends tech with charisma.

And it's the driver who gets the best of it with a pin-sharp 12.3-inch hi-res digital display filling the instrument pod beneath the single hooded cowl where once only traditional dials held court.

It appeals not purely because it's state-of-the-art but because it's so user-friendly and informative. The wide-angle screen shows a digitised speedometer and rev-counter dials against a backdrop of live navigation mapping and infotainment displays.

Best of all you can reconfigure it in an instant on the move if you suddenly need to dip into a different set of information; for instance, you can shrink the virtual speedometer and rev-counter to maximise the 3D map as well as bring up other core driving information and graphics. Helpfully, a digital mph readout appears within the speedo while the currently engaged gear is always indicted in the rev-counter.

Making life even easier for the driver is Audi's truly foolproof multimedia interface that comes with MMI Touch to further enhance the tech-fest: the top surface of the master rotary MMI control is also a touchpad for inputting fingertip-written numbers, figures and even symbols; you can also zoom in/out smartphone-style, scroll maps and search within the navigation, telephone, car, and media menus.

Or you can just stick to the equally easy and quick MMI shortcut buttons. Whichever way you prefer to input your destination you'll find it idiot-proof with accurate spoken directions. Webistas will appreciate Audi's Connect feature that gets you online with access to Google Earth's maps and street views.

And all the while you'll be sitting comfortably in a cosseting, low-slung Super Sports seat upholstered in diamond-stitched grey suede. Admittedly these are a Ł695 option but worth every penny as they support you in all the right places and, along with the good-to-grip flat-bottomed steering wheel, offer smooth every-which-way adjustment plus powered lumbar (in and out and up and down); the front seat cushions can also be extended for additional under-thigh/knee comfort.

Headroom, even for near six-footers, is unexpectedly good with the roof up — a full fist of it and there's masses of leg/foot room to go with it. The driver benefits from a well-sited foot rest for his or her left foot and also enjoys excellent forward and side vision that makes placing the Roadster a no-fear affair even in the tightest of gaps.

Audi have even managed to endow the TT's air vents with a dash of flamboyance — the five turbine-look circular fascia vents each have an outermost ring to control direction with an on/off slider for volume; ingeniously, each of the outermost vents' central hubs is also a switch that controls the three-stage neck heating (incorporated into the seatback) as well as the three-stage seat heating.

The three central vents work the same way but their switches control the A/C on / off and blower speed, the Auto mode and left / right cabin temperature, and recirculation / manually-targeted distribution (feet, face, etc). All visually very smart — and brilliantly easy to use on the move.

Other well considered touches include seatbelt guides on the seatback outer shoulders that guarantee a belt always being readily to hand with no uncomfortable twisting when buckling-up.

The powerfolding fabric roof is, obviously, the defining feature of the Roadster. As powered tops go, it is very quick — just ten seconds from closed to open. You can also close it on the move (up to 31mph) if caught in a downpour in moving traffic. Top down, the passenger or driver needs make no compromises regards comfort and refinement; like the eye of a storm, it's a calm, turbulence-free place to be.

With the hood folded away out of sight under the rear deck anybody can 'get' the appeal of a roadster — with so much more to be seen around and above, it's an invigorating way to travel. Raise the side windows and powered rear wind blocker and you won't feel any draughts or buffeting, even at motorway cruising speeds — if the skies are grey rather than blue, there's extra cosseting available from the 'air-scarf' system that wafts hot air onto the back of your neck (like the heated seats, the air-scarf offers three settings from nicely warm to full-on hot). If you're travelling with a companion, refinement is good enough for you to chat without raising your voice.

Of course there will be days when the top stays firmly in place but that's not a problem either because the hood is very well insulated against both the cold and noise — top-up, the cabin of the Roadster is every bit as snug and virtually as hushed as you'd find in its fixed-head coupe.

The entry-level Roadster Sport rolls on multispoke 18-inchers wearing 245 profile rubber and comes with a standard suspension set-up — and the ride is agreeably complaint despite its handling wieldiness. Even on the iffy tarmac found on most of the UK's 30mph roads, the Sport serves up a pleasant ride with a marked absence of any jiggling.

Don't let that fool you because it's firm enough to deliver impressively on the handling front. Which brings us to the 'q' word: when you think of Audi you're most likely to also think of 'quattro' — and vice versa. However, you don't have to go for an all-wheel driver as front-wheel drive is standard on the less expensive versions. Sure it adds to the dynamic mix but our 2.0-litre Sport spec test car put its power down through its front wheels.

And there's more than enough traction to ensure that even the front-wheel driving Sport version grips like a thoroughbred. The topless body is as rigid as it needs to be and thanks to the hybrid (steel and aluminium) construction Audi Space Frame platform it's quick and light on its feet and obedient to the helm, which makes good use of an intelligently-weighted progressive electromechanical steering rack.

This is a sports car you can drive for hundreds of miles before climbing out refreshed and satisfied because it feels so fluid and is so effortless to pilot, even pressing-on along challenging B-roads. The shifts from the instantly responsive S tronic 'box are as seamless as the Roadster's changes of direction. And the brakes — whether you're using them to scrub off speed or temper your line through a deceptive bend — are reassuringly progressive with as much bite as your right foot demands.

The icing on the cake is Audi's Drive Select that enables instant on-the-fly changes between driving modes — not surprisingly, our test car spent much of its time in Dynamic (hence that sub-forty mpg figure) but Comfort does a fine job without compromising the fun factor.

There's also Auto as well as the driver-customised Individual for drivers who prefer to tune each of the separate handling components to their own spec. Plus an Efficiency setting that boosts economy by permitting the TT to freewheel when it's safe to do so; no worries because touching the accelerator or brakes sees drive instantaneously re-engage.

The Roadster's long boot is more than fit for purpose — it's 280-litre capacity swallows more than you might expect thanks to the dedicated storage well for the soft-top that keeps the luggage space the same whether you're driving with the roof up or down. Plus there's room for overspill and squashy weekender bags behind the seatbacks.

Look under the boot floor and you'll find a multi-compartment tray that additionally provides some useful extra storage; there's also plenty of in-cabin stowage including a large lockable locker with a first aid kit between the seatbacks in the rear bulkhead.

Classy looks, bona fide sports car handling, and rorty entertaining acceleration combined with civilised top-down cruising when you just want to coast along and take in the sights means the TT Roadster is perfectly at ease matching each and every one of your driving moods ~ MotorBar