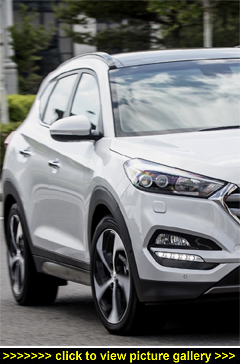 “Such is the demand by customers
for SUVs and Crossovers — small,
medium and large — that carmakers
who have never had an SUV in their
line-up, and others who have, are all
busy introducing new or refreshed
ranges...”

SUVS AND CROSSOVERS now represent the best-selling sector in the European new car market (and the third best selling sector in the UK, where last year sales increased by 21%), so Hyundai's recently introduced all-new Tucson range, which replaces their popular mid-sized SUV, the ix35, is clearly in the right place at the right time.

Reflecting the wide range of prices (from Ł18,995 to Ł32,695) there is a substantial number of different models. Current engine choices are 1.6 GDI petrol or 1.7 and 2.0-litre CRDi turbodiesels with power outputs from 114 up to 182bhp. Depending on the engine chosen there are 2WD and 4WD options, manual and automatic transmission choices and a wide range of specification levels.

Here in the UK demand is already strong for the new five-seater Tucson: early sales reportedly make it the brand's current top-seller, with 13,000 already registered — well ahead of the predicted 9,000 sales.

The new Tucson has been designed and engineered in Europe and is built at the South Korean carmaker's Czech Republic facility and comes with Hyundai's highly-valued five-year/unlimited mileage warranty.

The most noticeable thing about the Tucson is its imposing exterior size: measuring 4,475mm nose-to-tail it fronts-up with a very attractive face dominated by a hexagonal grille flanked by sleek, swept-back LED headlight units. The front bumper incorporates neat LED daytime running lights and the overall appearance highlights its wide track.

To the side is the now commonplace rising waistline, deep sculptured door panels and a coupe-style roofline which even though it slopes down doesn't restrict headroom for back seat passengers. At the rear is a substantial wide-opening tailgate (electrically operated on the Premium SE) which gives easy access to a 513-litre boot.

Should you opt to have a spare wheel stored beneath the boot floor instead of a tyre inflation kit, the boot capacity reduces slightly, to 488 litres. With the 60:40 split rear seats folded the loadbay is a practical 1,503 litres (1,478 with the spare wheel option). For the record, the Tucson will tow a braked 1,900kg.

First impressions of the Tucson's interior is again about size: it's roomy front and rear, with plenty of width and good headroom. The seats are comfortable with lots of powered adjustment, and the dash logically laid-out and there's also plenty of steering column adjustment, all of which contributes to a good driving position. In the back cabin there's ample room for three adults and the low-level transmission tunnel doesn't cramp foot space for a third in the middle.

The trim has various textures and generally all of it looks neat and well-fitted although some of the plastics are hard to the touch and look prone to scuff marks. My test version had leather upholstery which looked nice but whether it was 'real' leather or a cheaper manufactured type I'm still not sure. The front seats are heated and also have a fan-assisted cooling function.

Special praise goes to the excellent SatNav: it's live, it's fast, it's easy to use, reliable, and above all informative — a definite must-have item. Praise too for the driver aid systems, in particular the blind spot detection facility that's really useful as the rear-quarter visibility is limited.

With the all-new platform and suspension system tuned for European roads, even the worst of British road surfaces didn't unduly unsettle the Tucson's composed handling. The suspension is set up to give a softer ride but even that didn't induce any noticeable body-roll during cornering or fore and aft pitching accelerating or braking.

Only the steering lacked feedback; that said, it was precise enough. The 4WD system provides 100% of the drive to the front wheels most of the time, with up to 50% sent automatically to the rear wheels if front-end grip is reduced. The traction control cornering function combines with the variable torque distribution so in the event of front-end understeer, higher torque is sent to the rear axle to improve cornering grip. There is also a 4WD Lock setting which locks the front:rear torque delivery 50:50 for off-road travel.

When it comes to the choice of engine, whilst the 114bhp 1.7-litre turbodiesel unit is likely to prove the most popular because of its lower purchase cost and reduced emissions, it is reported to be lack-lustre in performance.

However, the 134bhp 2.0-litre turbodiesel tested here is a refined unit with plenty of poke and a healthy 275lb ft of torque on tap from just 1,500rpm. Paired with the six-speed autobox, power delivery is progressive with smooth up/down changes and a Sport button that sharpens both engine and gearbox responses.

Top speed is 114mph and zero to 62mph takes 12 seconds and while that's not class-leading it is more than adequate for most people's needs.

The official Combined Cycle fuel consumption is 47.1mpg and on a long motorway journey the 2.0-litre recorded 42.7mpg, which reduced to an overall average of 38.4mpg after more local driving trips. The CO2 emissions are a high 160g/km which means an annual Ł180 road tax bill. Company car drivers will also pay a high 32% Benefit-in-Kind tax.

A word to the wise — choosing a manual transmission with 4WD instead of the auto gearbox will significantly reduce tax-incurring CO2 emissions to 139g/km, road tax to Ł130, and BIK to 27%. It also reduces the price by Ł1,500.

If a mid-sized SUV is your choice of vehicle — and there is a fast-growing number of new customers who want one — the handsome, comfortably riding and good-to-drive Tucson has to be considered for its road presence, interior space, high levels of equipment and long warranty. Some versions are also very competitively priced although care should be taken on exactly what model is chosen; not just on purchase cost but on running costs as well. ~ David Miles