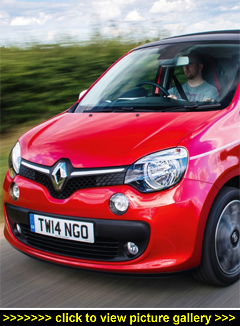 “Renault’s new Twingo five-door city
car is unique: it comes with a rear
engine and rear-wheel drive, offering
more interior space from its compact
length and more agility and fuel
frugality from its three-cylinder 900cc
and 1.0-litre petrol engines. Yours
from Ł9,495...”

THE LATEST TWINGO shares its platform and running gear with the next generation Smart Forfour, and both are manufactured on the same production lines in Revoz, Slovenia. It's the Twingo, though, that's the first to market with the Mercedes offspring (via the Smart) brand arriving at the end of this year.

The Twingo is offered with the choice of two petrol engines, both three-cylinder units. The first is a 1.0-litre naturally-aspirated 69bhp version and the second a 900cc, 88bhp turbocharged unit. There are four models in the line-up: the 69bhp engine with both Expression and Play specifications; the 69bhp unit with Stop & Start in Dynamique spec; and the 88bhp turbo Dynamique with Stop & Start. All have a five-speed manual 'box but a sequential automatic will be added to the 88bhp model options from September 2015.

In addition to the three trim and equipment levels there is a huge range of personalisation options from chic interior and exterior style packs to technology packs, as well as a choice of decals and ego-extending larger alloy wheels.

The Twingo is the latest in a long line of Renault cars to offer rear engines that includes the Dauphine, the R7 and R8s of the 60s and 70s and the more recent Renault 5 Turbo. Renault says that by mounting engines at the rear small cars can be made shorter and that makes them easier to drive and park, nimble and fuel efficient.

Unexpectedly for a rear-engine design, there's a boot above the Twingo's powerplant which extends when the rear seats are folded flat. Unlike most other rear-engined small cars of the past there is no boot space at the front where an engine bay is normally found. Instead there's a small space with a sliding plastic bonnet lid housing the fluid filling points, the radiator and, for turbocharged models, the intercooler.

The boot holds between 188 and 219 litres, depending on how the back seats are set, and up to a maximum of 980 litres of load space with them folded. Another benefit of rear-wheel drive is that, with no restrictive driveshafts at the front, the Twingo's turning circle is that of a London Black Cab — a real boon for city drivers.

Another part of the Twingo's appeal will be the low taxes — the 69bhp unit and 88bhp, both with Stop & Start, emit 95 and 99g/km of CO2 respectively; the entry-level 69bhp model without pushes out 105gkm. Insurance costs are also low; the lower powered engine being rated Group 3, the higher powered model at Group 8.

The Twingo is only available with a five-door body but the hidden rear door handles give the impression it has a three-door design. With its compact 3,595mm body length, its stubby short-nosed bonnet, relatively high roof, wide rear haunches (reminiscent of the Renault 5 Turbo) and deep glass tailgate, the Twingo is easily identifiable from other City Cars and its uniqueness will definitely have some appeal.

However, I'm not so convinced that the rear-engine layout is quite the breakthrough it seems. Being located under the boot floor does not, for instance, give easy access for checking the engine oil, and the boot floor certainly feels warm when the engine has been running — not so practical for carrying perishable items of shopping or the family dog! Another minor niggle: the sliding front plastic bonnet lid didn't seem that easy to operate either to check other fluid levels.

Inside, the front space is adequate; I thought both seats felt a bit high in the car but there is plenty of headroom. In all other respects the interior is a cheery environment and can be customised with the application of coloured styling trims so personalisation, popular with today's small car buyers, is easy. By the way, you get five doors but only four seats.

There is some body roll and the high unsupportive seats didn't feel comfortable during cornering, a situation made worse by having no roof mounted grab handle to hang onto. Handling is relatively neutral, some understeer moving to some oversteer with the weight balance being distributed 45% front:55% rear. On small front-wheel drive cars the weight balance is normally around 70% front:30% rear, which I believe gives better directional stability during cornering.

As for the choice of engines? Both are three-cylinder units which emit the usual throaty noise and slight vibration. The 69bhp unit will be fine for city and town commuter travel as well as the occasional longer trip. It is adequate enough given its working environment, with a top speed of 94mph and a zero to 62mph acceleration time of 14.5 seconds. With CO2 emissions of 95g/km there is no road tax to pay. Officially, this unit returns 67.3mpg (38.7mpg on test) and insurance is Group 3 so the lack of zip from the engine is potentially offset by low running costs.

I preferred the more powerful 88bhp unit — it is more responsive, with 32lb ft more torque at 99lb ft from 2,500rpm, and so it coped better with brisker acceleration to overtake slower traffic and, more importantly, it coped better with going up hills. Top speed is 103mph, zero to 62mph takes just 10.8 seconds, and the official fuel consumption is 65.7mpg (46.6mpg on test). CO2 emissions are 99g/km so, again, road tax is still zero cost.

Apart from the brisker acceleration the sharp-eyed among you will have noticed the better real-life fuel economy — both engines were appraised using the same routes and traffic conditions. I think it's well worth paying the extra Ł700 for this 88bhp engine because it is just easier to live with; and because it doesn't need working as hard it returned almost 8mpg better fuel economy. On the downside, the insurance is Group 8 rather than Group 3. Overall, the turbo 88bhp engine is definitely the better and more fuel efficient choice.

Against? Sluggish 69bhp engine for out of town driving, negative handling and steering response, not as sharply priced as others in this class, engine heats up the load space, and it's fiddly to check the engine oil and other fluid levels.