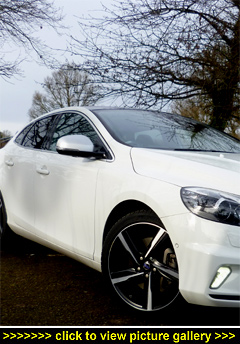 “Whisked along by a new 187bhp
D4 turbodiesel and new 8-speed
automatic transmission combo,
Volvo’s V40 is the Swedish car-
maker’s best-selling range. Throw
in an official combined figure of
74.3mpg and the V40 begins to look
very interesting indeed...”

THAT NEAR-75MPG HEADLINE average consumption keeps company with two other very attractive figures: 67.3 (Urban) and 78.5mpg (Extra Urban) — or, as it's easier to think of them, T&T (Town and Touring). So, did we see them ourselves on the driver's computer screen?

First we would remind you that we don't go out of our way to drive 'economically' because neither does the average driver; we want MotorBar's test figures to accurately show what Jane and Joe Public should achieve. That said, seven nights and eight days in our V40 R-Design notched up an overall average of 52.1mpg. Still pretty impressive; and lighter-footed drivers will undoubtedly fare better.

Whatever the marketing guys would have you believe about a car's performance or its green credentials, motorists still have the same starting point when considering a new car — it's looks. Which is why those thinking of a V40 may already have some of the following on their shopping lists — an Audi A3, 1 Series BMW, Mercedes A-Class and, of course, VW's omnipresent and egalitarian Golf. Clearly these discerning buyers want some class along with their badge.

And the five-door, five-seater, coupe-esque V40 can certainly offer them that. Particularly when wearing Volvo's sharpest R-Design livery.

The meaty, chromed R-Design tailpipes, one protruding at each rear corner, are not at all boastful given its 0-62mph sprinting ability and double the legal limit top speed. Five-arm diamond-cut 18-inch black painted alloys wearing 225/40 Michelin rubber complete the ensemble.

Packed into the V40's slender 4.4-metre long, five-door bodyshell are five seats and the practicality of a hatchback. Get aboard and the door will shut after you with that muted 'thunk' that comes with quality engineering — no slamming required!

As is the norm, sitting in the front of a V40 — with or without a steering wheel ahead of you — is a real pleasure. Headroom is generous and the powered and heated R-Design leather-faced sports seats are specially stitched and embossed. They're extremely comfortable too, and keep your body perfectly supported on all journeys plus make light work of long trips.

If you're the one at the sporty, multifunction, three-spoke R-Design helm then you most certainly won't have any complaints: the driving position is spot-on, helped by fine forward visibility (you can see along the bonnet) and you can vary the degree of power assistance for the speed-sensitive steering — choose between three different weightings.

While mentioning 'nice touches', the frameless auto-dimming rearview mirror deserves a 'flag' not just for the maximum coverage it provides but also for its modish chamfered edges. And then there's the traditional handbrake, which will appeal to many.

The cabin's sophisticated Scandinavian ambience is shown to fine effect in the light flooding through the panoramic glass roof as well as by interior lighting that can be changed to match your mood. A thoughtful touch is the powered one-shot inner sunblind that opens from the back to the front and so allows your passengers to reap the sunshine while you stay cool in the shade unless, of course, you want your share of the sunlight too.

The R-Design aluminium trim is of first class quality, finessed by careful attention to fit and finish. Volvo's trademark slimline 'floating' centre console is home to just about all the switchgear — there are none on the fascia but the light switch and boot release are situated on the fascia to the right of the wheel — including controls for the dual-zone electronic climate control, seat heating, and infotainment functions such as navigation, media, Internet connection and services.

One handy feature (of many) is that you can send an address from the My Volvo web service directly to the car.

Alongside conventional safety kit such as airbags, anti-whiplash headrests and a plethora of behind-the-scenes systems (Blind Spot monitoring, Lane Keeping Aid, Driver Alert, etc) there are equally pertinent features that reflect today's often invasive social communications; for example, should you receive a text message while driving, the system will read it to you — but only when it's safe to do so; so not on a bend.

With Volvo On Call you can stay connected to your car via your smartphone or mobile device — you can locate it, lock it, unlock it, as well as access all your dashboard readings (fuel level, trip meter, etc). It also guarantees that emergency assistance is always available at the touch of a button.

An easy-on-the-eyes 8-inch active TFT crystal instrument-cum-information display offers the driver more choices — choose from Eco, Performance or Elegance, each with dedicated themed displays and data that matches the name. We stuck with Performance; not just for its attractive red-and-yellow colour mix and crisp white readings but primarily for the large digital speed display in the centre of the rev-counter.

And so should other drivers if recent research by Direct Line is anything to go by: apparently over 10 million motorists (26%) underestimate their excessive speed in 30mph limits although official Department for Transport stats show that actually it's far worse than that, with 46% of drivers exceeding the speed limit on 30mph roads.

At seven inches, the centrally-sited SatNav screen is large enough and you can't fault its mapping and spoken directions; full postcode destination entry makes life very easy. The R-Design sports steering wheel is good to grip and there's plenty of remote controls on its spokes, including gear change paddle-shifters, to keep your hands where they belong. Look down and you'll see that you also get R-Design aluminium sports pedals and floor mats.

During the hours of darkness the cabin is cosily inviting courtesy of different mood themes using strategically-sited LEDs (eight colours). And if you're not toting passengers in the back then the rear headrests can be flopped down (by pulling a latch on each outer seat's shoulder) to improve rear vision for the driver.

Not that he or she needs to twist and look when reversing — the parking camera provides guidelines superimposed on the 'view' seen on the infotainment screen.

Find reversing a chore? No problem — the on-board self-parking Park Assist Pilot will do it all for you, from detecting a suitable parking slot to steering your V40 precisely into the chosen space.

In-cabin storage is more than sufficient with accommodating door pockets supplementing a large chilled glovebox, large cupholders-cum-open bins, a coin 'drawer' in the fascia, more storage under the central sliding front armrest as well as the handy 'hiding in plain sight' non-slip tray out of sight behind the floating centre stack and the useful full-width pouches along the edges of both front seat bases.

Safety kit is as good as it gets — the V40 has received the highest ever Euro NCAP score of any collision test and included as standard is City Safety, which senses potential collisions between 2 and 31mph and can activate the brakes should the driver not react in time.

Also standard is a world-first Pedestrian Airbag — if there's a pedestrian collision this amazing new technology releases the bonnet hinges and inflates an exterior airbag to help shield the pedestrian from the engine compartment, lower windscreen and A-pillars (at the same time it also protects the driver and front passenger from any screen intrusions).

If you want to, you can add even more safety systems such as Collision Warning with Full Auto Brake, Pedestrian and Cyclist Detection, Adaptive Cruise Control and Distance Alert, Active High Beam, Road Sign Information Display, Cross Traffic Alert (reversing out onto a busy road is always hazardous and this driver aid lets you know if anything is coming from either side).

Two adults can relax in the back whilst sharing the wide padded central armrest. If they're willing to give it up (I'm afraid I wouldn't!), a third can sit in-between. Despite the rising waistline and rear side windows, it's not at all stuffy riding in the back seats as the full-length panoramic glass roof keeps it all light and airy — it runs from the windscreen header to the rear headrests.

Those travelling aft are equally well catered for, enjoying a good degree of privacy thanks to the darkly tinted glass, as well as plenty of room for their feet, a soothing backrest angle and decent headroom while sitting several inches higher than those in front. Also liked are the cupholders accessible under a flap in the centre base of the rear seat.

The tailgate is self-lifting, and it rises to reveal a 335-litre boot that's memorable for both it's usable size and its versatility: the floor has two height settings but in addition the folding boot floor panel can be set at a variety on positions ranging from flat to fully upright behind the rear seat backrests to subdivide the luggage space to varying degrees. Simply clever!

And this can be formatted not just when the boot is used but also in conjunction with the 40:60-split/fold rear backrests dropped down to form a 1,444-litre loadbay. For the record, leave the boot floor in its standard position and you'll have an absolutely flat cargo bay floor. For carrying longer loads, the front passenger seat backrest can also be folded forward and down.

Other thoughtful touches include rear seat belts than don't snag when you drop the rear seatbacks, and not one but two internal boot lights. Finally, if you do ever suffer a puncture there's a space-saver spare wheel stored beneath the boot floor (a full-size spare is optional).

Not much more than a murmur filters into the cabin from the new turboed diesel installed in the engine bay; from where power is sent to the front wheels via an eight-speed Geartronic automatic 'box.

More importantly, the new 2.0-litre unit puts out some decent power — while its 187bhp is lively, its 295lb ft of torque is noticeably muscular; and while peak torque comes in at 1,750rpm, the turbodiesel is keen to go well before that.

Consequently it pulls strongly from low- and mid-range speeds; pick-up is crisp, making it satisfyingly responsive to your right foot. And thanks to the autobox's smooth-shifting eight gears, progress feels deceptively unstressed as it whips you off the line to the benchmark 62mph in a spirited 7.2 seconds. Maximum speed is 143mph, with CO2 emissions kept to a 'green' and road tax-avoiding 99g/km.

The Geartronic autobox makes it a pleasure to access the power in all its modes; either as a full auto or in Sport when you want to keep it all on the boil — and, of course, there are paddleshifters on the wheel's horizontal spokes for when you fancy some totally hands-on driving.

Range-topping R-Design V40s run on a lowered and sportier version of Volvo's dynamic chassis. The electric power-assisted steering delivers precise control alongside a decent 'feel' for the road. It's fluent though the twisties courtesy of its Corner Traction Control feature that uses torque vectoring to make the car corner even more smoothly by braking the inner driven wheel, causing more power to be transmitted to the outer driven wheel.

This allows the driver to corner more tightly while reducing any tendency to understeer so the driver can press-on with confidence. The R-Design rides well without disturbing its passengers while at the same time delivering a good dose of driving entertainment. Cruising motorways it remains quite, refined and stable.

An über-safe, premium five-seater hatchback that majors on high quality and elegant and sophisticated Scandinavian design, the V40 makes a fine motorway cruiser, is good to drive and more than capable of rivalling the established premium Germans: Audi, BMW and Mercedes-Benz. — MotorBar