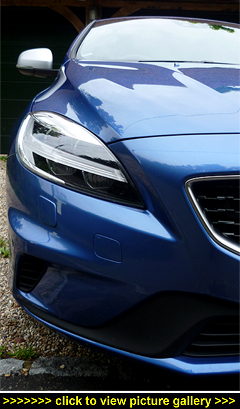 “If you already have a Golf and A3
Sportback on your shortlist you
could be missing something —
a Volvo. Because the Swedish
carmaker’s upscale V40 is definitely
in contention here...”

LOOKING DECISIVELY a go-getter in its R-Design attire, the V40 offers buyers a democratic choice of powerplants: unleaded fans can choose from a minimum of 120 and a maximum of 241bhp, while those with a thirst for derv get engines starting at 118bhp and topping out at a meaty 187bhp back-stopped by oodles of torque.

Which is what you'd expect from a five-door hatch that's intended to mix it at the premium end of the hatchback market — territory already occupied by the likes of Audi's A3 Sportback, the BMW 1 Series, Merc's A-Class and Volkswagen's evergreen Golf.

The V40 is Volvo's smallest car but don't let that put you off because at 4.4-metres from nose to tail it's a mere two inches longer than an A3 Sportback — although some would say the Swede fields the more rakish look. However, if you prefer rugged to racy then the Cross Country V40 variants could be right up your green lane.

Identified by its 'Thor's Hammer' daytime running lights and sleek nose-down-high-stepping-rear-shouldered stance, the R-Design V40 is undeniably one of the more athletic looking front-runners in the hatchback pack.

While all V40 variants are front-engined, front-wheel drivers, under the skin R-Design models are equipped with a sportier suspension (stiffer spring and damper rates), a 10mm lower ride height, and roll on 18-inch satin black alloy wheels wrapped in 225/40 rubber. Finishing off the tail treatment with a flourish are chrome exhaust tailpipes, one at each corner either side of the rear diffuser, and an integrated roof spoiler.

It looks like it goes and you won't need to drive far to discover that behind the 'R' badging there's a well-fettled character. The R-Design steers well, serving up enough accuracy and turn-in to mesh with the 'dynamic'-grade chassis's inbuilt agility when pressing on; grip is dependable and body roll well managed — point the V40's nose at a fast bend and it will take you through, staying flat and composed through to the exit. And when you need to scrub speed, the brakes are nicely resolute.

Bigger wheels and hard-charging suspension often have a downside when it comes to ride quality, but the R-Design manages a practical compromise that takes account of that old truism: 'all work and no play makes Jack a dull boy'.

In the 'R' you can play when you want to, hustling with reassurance, and even your everyday driving 'work' will be far from dull; firm but fluent without any jarring, particularly around town where bumps are dealt with sans drama.

Prices start at Ł20,715 and top-out at Ł33K, and for that you'd be fully justified in expecting an upscale cabin. And you won't be disappointed because the V40's all-black-themed cockpit is underscored by Scandinavian flair.

Volvo cabins have for a long time now offered some of the very best seats around, and the R-Design Pro's are no exception — of a sporty turn, they're well bolstered and upholstered in smooth quality leather with three-stage heating; cosseting yet supportive, they offer plenty of adjustment so from behind the multifunctional three-spoke wheel (with an especially good to grip rim) the driver is guaranteed not only a spot-on driving position but good visibility too.

Keyless locking on all four doors and keyless start gets you in and away as quickly as possible (something that's much appreciated on a wet and blustery winter's day). And while ten inches is undeniably useful, actually seven is all you really need as confirmed by the V40's infotainment screen, inset top dead centre of the fascia.

The instrument panel dead ahead of the driver is elegant as well as customisable — a TFT single-dial affair it lets the driver select from three themes: blue-coloured Eco; aqua-tinged Elegance; and red-and-yellow Performance. Each also shows a different mix of information in a different layout.

For us the best display was Performance (well, we would, wouldn't we!), which features a main rev-counter with a large digital speed readout at its centre alongside a road-sign reminder of the posted speed limit, flanked by useful stuff such as range, etc. Whichever set you choose legibility in any light is excellent.

Beneath the infotainment screen sits one of Volvo's trademark 'floating' centre consoles; well populated with switches, at first glance it looks to be very 'busy' but actually they're surprisingly easy to recall and use. Single-press buttons will take you directly into major menus for radio, media, my car, navigation, and telephone.

Equally good news: the climate control system is controlled by knobs rather than through the infotainment display — something many drivers still prefer as much as they like traditional pull-up handbrakes (the V40 has one of these too). What's good is that when adjusting the cabin temperature (or seat heating), icons pop-up in individual windows on the screen so you can keep your eyes high enough to remain aware of the road ahead while checking the settings.

Build quality is first-rate and the materials are as tasteful as they are tactile — and certainly as pleasing as anything coming out of Germany. Space-wise the V40 is far more accommodating than its swish external lines would lead you to expect — climb aboard and you'll quickly find that it's a pleasure to spend time in.

A popular add-on is the Ł450 Volvo On Call — a GPS communication system that helps you stay connected to your car: locate, lock, unlock your car and see all dashboard readings including the fuel level via your smartphone, along with emergency assistance at the touch of a button as well as stolen vehicle tracking.

Sitting at the top of the V40 trim tree, R-Design Pro models are equipped with all the expected 'goodies' including, in addition to those already mentioned, such things as a rear camera, parking sensors, heated powerfolding door mirrors, one-shot up/down electric windows, etc.

There are also abundant safety and assist systems such as City Safety to prevent you running into the vehicle ahead, multiple airbags (including one for the driver's knee), front seat whiplash protection, dynamic stability and traction control with torque vectoring, tyre pressure monitoring, auto wipes and lights, and LED headlights with daytime running lights.

And the V40 doesn't just look out for you and yours, but strangers too — the five-star Euro NCAP V40's is fitted with a pedestrian airbag that pops up from under the bonnet to minimise pedestrian injuries.

Other helpful features include a parking ticket holder on the screen pillar, a frameless auto-dimming rearview mirror (looks über-cool and provides the maximum rearward views), very efficient cooling and heating (as you'd expect from a car developed in a country whose land cuts into the Arctic Circle), and plenty of practical in-cabin storage (bottle-holding door bins, generous cupholders, a lidded cubby between the front seats along with an adjustable armrest capping a storage box with comms connections and 12-volt power, and a damped and lockable glovebox).

The rear passenger accommodation consists of 'individual' rear chairs as comfy and sporty as those fitted up front and which boost views out by being set just a few inches higher; they're also mounted more inboard than some which creates more shoulder and elbow room. They're linked by enough of a base cushion to accommodate a third middle passenger, although two full-grown adults sharing the well padded drop-down centre armrest is the ideal status quo — and they won't go short on headroom unless they're over six-feet tall.

There's also a brace of magazine pouches, pop-out cupholders between the outer seats and, for those who prefer to shun the limelight, privacy glass from the B-pillars back.

At the tail there's a very serviceable boot that starts out at 335 litres but load it to the roof and it'll take 402; dropping the 60:40 seatbacks — they fold fully flat — creates a seamless 1,032-litre loadbay. The boot floor is dual-height but can be folded to subdivide the boot — handy when you need to divvy up the shopping or isolate fragile cargo.

Used in its upper setting, the boot floor creates out-of-sight space below for valuables; at the lowest level you'll find a space-saver spare wheel. Bag-holders are of course included! Handy too is the forward-folding front passenger seat that makes carrying very long items very doable. Alternately you can just tow 'stuff' behind the V40 — the D4 will haul a braked 1,500kg.

Stirring the R-Design Pro into action is easy courtesy of a clean-changing gear shift. And there's definitely something worth stirring under the bonnet — Volvo's upgraded turbodiesel engines come in three strengths: the most powerful is the four-cylinder D4, as tested here, which kicks out 187bhp along with a muscular 295lb ft of torque.

Despite the recent negative publicity, for many motorists turbodiesels make the most practical driving partners, serving up a strong-in-any-gear sense of purpose. The D4 is not just strong, but nicely refined and pleasantly muted when cruising.

With torque peaking from 1,750rpm, it feels every bit as quick as its 0-62mph paper time of 7.4 seconds suggests. Motorways are the 143mph D4's second home, where the feeling is of a strong punch always in reserve, helped by a born-to-cruise top gear that gobbles up the miles.

While not in the least trying to get the most miles from every gallon, we still recorded a wallet-friendly 48.7mpg over the course of a week's hard driving. In regular real-life conditions, more sympathetic drivers than us should expect to cross the mid-fifties and perhaps even hit 60mpg.

The V40 R-Design Pro's sporty looks mask an agreeably relaxed driving character. Satisfyingly economical and packed with really useful driver assistance and advanced safety systems, it's rewarding to own and makes an appealing alternative to most cars wearing a German badge. ~ MotorBar