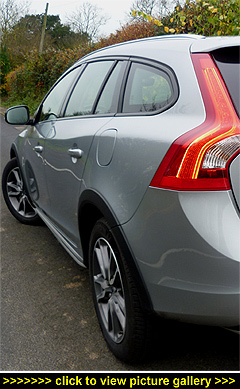 “With flooding becoming a more
regular hazard than snow in the UK
it makes sense to put a little more
space between your car’s floor and
the road. Better still, go for a high-
riding estate, preferably one with all-
wheel drive...”

AND WHILE YOU'RE AT IT you may as well be comfortable and surrounded by all of motoring's little luxuries. And protected by plenty of safety kit, too. Oh, yes, don't forget the premium badge… Hmmm, looks like a job for Volvo's latest V60 Cross Country estate.

Protected by front and rear underbody skid plates and with a 201mm ground clearance and the ability to wade 300mm of water, Volvo's V60 Cross Country puts the 'r' in rugged. Adding a dash of polish to its handsome frontiersman looks is a black honeycomb front grille, gloss black window trim and door mirrors, smart (and unique to the model) titanium-finish alloys and a set of tailpipes neatly finessed into the base of its strongly-shouldered tail.

Like many of the crossover breed, Volvo's Cross Country estate allows you to have 'the look' without the four-wheel drive. However, choosing between 2WD and 4WD takes you down different diesel engine paths. Two-wheel drive (front-driven) versions are powered by either Volvo's 147bhp 2.0-litre four-cylinder turbodiesel or their new class-leading Drive-E four-pot diesel powerplant, another 2.0-litre but with 187bhp.

Four-wheel drive versions have a 2.4-litre in-line five-cylinder turbodiesel engine doling out the power. This too punches out 187bhp but has the most torque of all three units — a hefty 309lb ft — and is mated to a six-speed automatic transmission. If you want a stick shift then it's a 2WD version for you, both of which also offer an eight-speed autobox. Confusing? Not really. Go for AWD, be prepared to tackle the worst and enjoy the Geartronic auto with a combined cycle economy of 49.6mpg which on test averaged a real-world 40.7mpg.

Driver's who like to wring every last mile out of every gallon might like to press the Eco button — this makes the Start/Stop proactive (the engine may auto-stop before the car comes to a complete halt), fuel efficiency is further optimised by coasting replacing engine braking, and some climate control functions are temporarily deactivated. For the record, our test average was arrived with Eco left switched off.

The 2.4 is a 'fit' powerplant for the 4WD Cross Country — with peak torque on tap from low revs it feels 'gutsy', pulling willingly from not much above tickover. The benchmark 0-62mph takes a smidgen under 9 seconds (8.9) and it feels as punchy as the on-paper figure suggests. Top speed is a more than adequate 127mph.

The smooth-shifting Geartronic autobox is an easy partner for the five-pot and makes light — and safe — work of passing slower-moving traffic without any drama. Mechanical refinement from this 2.4-litre turbodiesel is also good, although when pressing on you can coax a gratifying growl from under the bonnet. Quiet at speed, it lopes along at the legal limit with plenty in reserve and always feel ready to leap forward in response to some extra pressure on the accelerator pedal.

Before we get into how the 'jacked up' AWD Cross Country drives it would be as well to check out the accommodation. As can easily be ascertained from reading any of our Volvo reviews, settled in a Volvo cabin is a fine way to travel. The V60 Cross Country's cockpit continues the trend.

Defined by open-plan Scandinavian interior design that's unmistakably premium grade, its major feature is undeniably its seats. Back in the late 80s, US rap group The Beastie Boys triggered a crazy cult of 'liberating' VW badges from Volkswagens — once you've sat in a V60 Cross Country you can almost feel that same anarchistic urge to rip out the shapely and super-comfy seats and take them indoors with you…

There's plenty of kit as standard including the just mentioned leather-faced chairs, a first-class multi-mode TFT instrument display, and a seven-inch touchscreen with hard-buttons for immediate access to the top-level menus (media, phone, navigation, Internet, etc) of the comprehensive infotainment system that includes SatNav and a DAB radio.

The driving position is spot-on with generous headroom even with the seat in its raised position and enhanced by a power-operated seat with a three-settings memory as well as power-adjustable lumbar adjustment. Bolstering is pleasantly 'holding' without being intrusive and you can feel it doing its job along your outer thighs and around the back of your rib cage.

The handy soft storage pouches found along the front of the seat bases on some Volvo models put in a welcome appearance on the V60. Deep door bins, handy storage boxes, large cupholders, and a flip-over (180 degrees) centre armrest that doubles as a tray for those in the rear, all help keep everything shipshape in the cabin.

The three-mode instrument panel display is another much appreciated Volvo 'regular' and works perfectly with large and crystal-clear presentation of everything the driver needs to know (most importantly the big digital speedometer readout) and which gear is currently engaged. Paddle-shifters on the black-and-satin chrome trimmed three-spoke wheel's horizontal bars are joined by remote buttons for voice, speed limiter, cruise, a driver-set 'favourite' function, and audio.

The electric park brake is an easy one and releases automatically as you pull away so long as you're belted up. Other user-friendly touches include a large frameless auto-dimming rearview mirror, a proper 'blackout' sun blind for the one-shot powered tilt-and-slide glass sunroof and the SatNav's time-saving full-postcode destination feature along with clearly tagged named roads on the 3D maps.

And a damped lid for the large glovebox that doesn't crash down on the front passengers' knees! Also agreeable to the touch as well as visually is the cool satin chrome trim and real wood treatment for the centre stack and door armrests.

For passengers travelling in the rear cabin lounging is definitely on the agenda thanks to roomy, well-upholstered seats (that can accommodate three adults side-by-side) with relaxing backrest angles, plenty of space for feet and knees and a fist of headroom. A drop-down centre armrest with built-in cupholders is supplemented with usable outer armrests. Sitting in the back there's the satisfying feel of being in your own private room — and that's one very big 'plus'.

So then, how does it drive? First, there's an unexpected bonus courtesy of the Cross Country's 201mm ground clearance: at the start and end of your journey the extra ride height — 65mm over a standard V60 — makes getting in and out a doddle.

However, even if you never venture off-road the Cross Country delivers greater capability for tackling all man-made roads (rough, smooth, and even unmade dirt tracks) particularly in treacherous weather conditions. The all-wheel drive is seamlessly selected automatically whenever it's needed with the system varying torque as appropriate through an electronically-controlled hydraulic clutch front to rear by as much as a full 100%. All you need do — rain, snow or ice — is to point the V60's nose and drive.

It's higher riding stance, commanding driving position and fine all round visibility make it easy to place the Cross Country accurately on the road. It's also well-mannered with direct steering and grips well, noticeably so cutting through bends, with body lean well controlled.

The all-independent suspension serves up a reassuringly firm-ish but never uncomfortable ride quality, with the effects of potholes and broken tarmac all satisfactorily minimised.

For a 4.6-metre-long family 'wagon' the V60 Cross Country divides up cargo and passenger space very democratically: both are well served and when it comes to luggage the quality-carpeted 430-litre boot is more than up to scratch; for serious lugging duties the rear backrests can be folded to provide a 1,241-litre cargo bay with a perfectly flat floor, making it versatile enough for both family and lifestyle-oriented wagonmasters.

For the record, if you do need to maximise what you take with you when the family unit is travelling together you can always HUG (Hitch-Up and Go) — the 2.4-litre pulls a braked 1,900kg. There's also a wide, full seat height load-through hatch and a built-in dog guard that doubles as a safety net if you're loaded above the waistline. And, welcome news at a time when many carmakers have substituted one of the universally unloved 'tyre repair' kits for a proper spare wheel; under the boot floor you'll find a space-saver.

The all-weather V60 Cross Country lives up to its name with foolproof all-wheel drive and extra ground clearance to get you through when the going gets tough. But its rugged looks only tell half the story because inside it is cosseting, comfortable and accommodating and its extensive safety features will keep you and your family as safe as houses come what may. — MotorBar