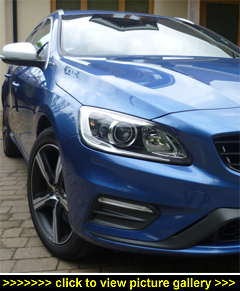 “Hybrids are clean and efficient and
are the future-here-now. But did you
know they can also fly — Volvo’s
Twin Engine V60 will zip to 62mph
in 6 seconds and hits 143mph at
full tilt...”

WHILE FULL-BLOWN estate cars are undeniably versatile, it's the so-called 'lifestyle' estates that tend to be better suited to today's multitasking demands. Volvo's V60 is one of this desirable breed and along with a raft of traditional powerplants can also be had in hybrid Twin Engine guise.

'Twin Engine' perfectly describes the powertrain: a traditional turbodiesel working intelligently in harness with an electric motor whose battery pack is installed beneath the boot floor. And until such time as pure-electric vehicles can guarantee 200+mile ranges they'll always come with some built-in 'nagging doubt' — which leaves the plug-in petrol or diesel hybrids as the first choice for all motoring friends of the Earth.

Driving the front wheels, the diesel is one of Volvo's proven 2.4-litre in-line five-cylinder units. When working in tandem, the diesel and electric motor — sited on the rear axle in order to deliver four-wheel drive when called for — produce 285bhp and 472lb ft of torque.

Even with an automatic transmission (a six-speed Geartronic) that's more than enough to take the V60 to a top speed of 143mph with acceleration from standstill to 62mph in a stirring six seconds. Better still, the combined emissions are just 48g/km — obviously when running in pure electric mode, which you can whenever you choose to, emissions are zero.

The real beauty of the plug-in hybrid system is that it's not the end of the world if you run the electric motor's battery pack out of juice because the diesel engine will just keep on running. So, no 'nagging doubt'.

It helps considerably that the Twin Engine uses a turbodiesel rather than a petrol to supplement the electric drivetrain because all the time that diesel is working it's not consuming as much fuel as it would had it been drinking unleaded. The average driver could reasonably expect to see around 50mpg in the combined cycle even if they don't religiously plug-in and charge up the battery pack (easily done via a three-pin domestic socket).

There's a naughty-but-nice irresistibility about the solid hit of instant torque you get when you press down hard on the Twin Engine's accelerator pedal. This is down to the immediate and super smooth wave of torque delivered by the electric motor — stomping on the pedal in Power mode unleashes a double-whammy of 285bhp and 472lb ft of torque that sends the V60 off the line to hit 62mph in just six seconds — quick enough to startle drivers of even some pretty quick machinery.

So indulge and you'll see consumption closer to the mid-forties; drive with a modicum of restraint and you'll likely extend that to 50+mpg; keep your journeys under 30 miles and recharge faithfully and you might even match the V60 Twin Engine's official 150mpg figure!

While you're never short of overtaking shove, this plug-in not about power, per se. For a start this a Volvo, so you can be sure it prioritises comfort and safety above road-burning handling while managing to be as green as it can get for that elusive blend of economy and pace.

These days few would argue that Volvo is not a bona fide prestige brand — the V60's handsome lines are classy enough to put it on shortlists alongside similar mid-sized estates from the likes of Audi, BMW and Mercedes. Fronted by a large trademark Volvo grille with swept-back headlights and a profiled bonnet running up to a steeply raked windscreen, it's gracefully styled. The coupe-esque glasshouse tapers back to meld with hallmark Volvo vertical rear lights framing the tailgate's full-width rear screen.

Inside there's more of that grace — the cabin is beautifully fitted out with über-comfortable, sumptuous soft leather sports-style seats with contrast piping and equally smart trim and rich finishings.

What's really nice is that unlike some other brands' eco models, Volvo has left the dash and instrumentation conventional so you don't feel it's a fascia too far. Everything is the same classy set-up you'll find on a non-hybrid V60 although some of the displays you can call up are harmonised with the plug-in's functions along with switchgear to select the various hybrid driving modes, of which there are four: Hybrid, Power, Pure, and Save.

The Hybrid setting lets the system draw power from both the turbodiesel and the electric motor, combining both as and how it deems necessary for the best efficiency; Power takes the restraints off and lets your right foot liberate max thrust using diesel and electric combined; Pure maintains near-silent all-electric progress at up to 60mph or for up to 31 miles (brake energy recuperation tops up the battery at every opportunity while driving).

A Save mode allows you to ring-fence the battery's charge for such times that you need to run solely on electric power — for instance, as is now the case in some emissions-restricted city centres. Talking of cities, Twin Engine V60s are exempt from the London Congestion Charge.

The cabin is equipped with all mod-cons including a 7-inch touchscreen infotainment and navigation system that, while it may not be iPad-sized, is just the job with sharp graphics, foolproof mapping and timely spoken directions along with a DAB radio and Bluetooth. At the same eye-level, ahead of the driver the instrument cluster features a customisable TFT Driving Information Display in the central 'dial' that, depending on the selected 'theme', shows a variety of driving information including a large digital road speed readout with the posted speed limit as well as navigation prompts. And, of course, there's also an SOS button to summon assistance in an emergency.

Switchgear is logical and although there are quite a few buttons and switches on the centre stack, including menu shortcuts, they're all clearly marked so remembering them is easy. Combined with the fine all-round visibility, the V60's upscale cabin ambiance makes for a first-rate driving environment.

In-cabin storage includes neat soft leather storage pouches on the front edges of both front seat bases, deep door pockets, some 'secret' space out of sight behind the centre console, a spacious storage box below the adjustable central front armrest (that can also flip back 180-degrees to serve as a tray for the rear passengers), twin dual-use cupholders, and a good-sized lockable glovebox.

And, being a Volvo, naturally you get a raft of active and passive safety features including a five-star Euro NCAP rating, six airbags, cruise control and speed limiter, automatic wipers and lights, height adjustable front belts, automatic drive-away door locking, active bending headlights, electronic stability control, blind spot and lane and proximity alerts (the driver can adjust the distance-to-the-vehicle-ahead settings for earlier visual warnings), as well as collision warning with autonomous braking and cyclist and pedestrian detection systems, and of course all-wheel drive.

However much you like your passengers they can't all ride shotgun alongside you, but at least you know they'll be equally at home travelling in the serene rear cabin's cosseting and well-padded seats. Two adults won't go short on comfort or space; the backrests are set at a relaxing recline, there's a fist of headroom and plenty of room for feet and knees. And if you must peg three in a row on the back seats then even an adult will find the centre spot comfortable with ample space above their head.

Damped grab handles are there for the using, as too are long outer armrests to supplement the wide central one that comes with a useful lidded tray and pop-out twin cupholders with a spill tray. There are also deep pouches on the front seatbacks, usable doors bins and air vents in the B-pillars

Behind the 60:20:40-split rear seats is a fair-sized boot of 445 litres which while not humongous will still take your weekly shop and family essentials such as a pushchair or even a honey-coloured Lab (for whom there's a reversible boot mat and a heavy-duty mesh dog guard that also serves as a luggage 'keeper' with large storage pouches).

Drop the back seats down — they fold perfectly flat, forming a seamless loadbay floor, and there's no lip at the tailgate to load over — and you'll have a lifestyle-friendly 1,241 litres for cargo. If it helps, the front passenger seatback can be folded flat should you ever need to carry something longer than a grandfather clock.

And when onboard carrying is trumped by the need for bodies on seats, you can always pull: the Twin Engine's muscular torque will laugh in the face of towing a braked 1,800kg.

Volvo's engineers have fettled this Twin Engine plug-in to obtain a decent balance between handling and ride comfort; to that end you get reassuring stability that shows in a suspension set-up firm enough to keep body roll in check through the twisty sections and nicely precise steering that sends the V60 where you point it.

More than that, it's always pleasing to drive. The brakes (hefty ventilated discs at each corner) are strong and decisive and for slippery conditions you can just press the reassuring AWD button.

Ride-wise, even with the sportier R-Design underpinnings and rolling on 235/40 18-inch alloy wheels, the Twin Engine does a commendable job of ironing out Britain's notoriously uneven blacktop. In truth, we were pleasantly surprised at just how compliantly it did ride. All of which makes it an accomplished long distance tourer, although the great seats must take some of the credit!

It's grand to be 'green' but it's also great to be travel first class, to have 'pace' whenever it's needed, and a style that will outlast the fashionistas. And it's also good to have a genuine alternative to the Germans (nothing personal BMW, Audi and Mercedes). ~ MotorBar