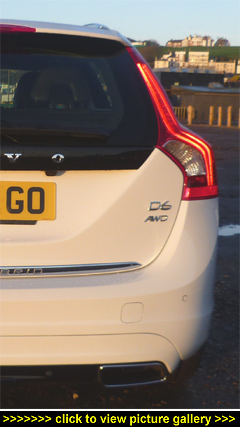 “Volvo’s latest hybrid-powered
‘estate-of-the-art’ V60 — the Plug-in
D6 AWD — claims a headline-
grabbing 155.2mpg! Audacious that
may be, but it’s also believable
because in addition to a five-cylinder
2.4-litre turbodiesel under the bonnet,
it’s also got an electric motor in
the boot...”

COURTESY OF THIS DIESEL-ELECTRIC PAIRING, running in the default hybrid mode the V60 Plug-in delivers satisfyingly 'green' emissions of just 48g/km — which also makes it exempt from the London Congestion Charge as well as road tax-free. As Tesco rightly says: Every little helps…

Recharging, using a bog-standard domestic power socket, is simplicity itself — plug your V60 in and three-and-a-half hours later you'll have a battery pack brimmed with electrical brio that's good for up to 31 miles in pure electric mode. And the cost? Just Ł1.30!

The electric motor earns its keep in more ways than one as it also provides the drive to the rear wheels (the turbodiesel under the bonnet drives the front pair) when in the on-demand all-wheel drive mode. Its 69bhp and 147lb ft also contributes a very useful boost to the Plug-in's full arsenal of 281bhp and 471lb ft of torque.

While we're talking oomph we should really mention the performance figures — top speed is 143mph and on the way there in Power mode this V60 can sprint to 62mph in a rather startling (for other road users) 6.1 seconds.

The V60 Plug-in has the ability to be all things to all drivers… well, at least three different things, thanks to a trio of driving personalities that can be engaged at any time using buttons close to the Geartronic selector lever.

The default Hybrid mode gets you under way, initially using silent-running battery power. In this drive setting the electric motor and turbodiesel act like a polished tag-team — sometimes individually, sometimes in parallel — to provide the best mix of economy and driveability. Not that you'll notice these computer orchestrated power switches when they occur.

If you're in a 'green' mood, then the Pure mode will waft you from A to B using only zero-emission electric power while respecting the air on this third rock from the sun. More good news: apart from the near-silence, you can drive in the all-electric hydrocarbon-free mode in exactly the same manner as in a conventional motor without the turbodiesel kicking in so long as there's charge left in the battery pack (helpfully indicated in the dash readout). And when the battery needs charging, the diesel automatically takes over.

The Plug-in also comes with a practical feature called Preconditioning. This pre-heats/cools the cabin to optimise the electric drive system ahead of a departure, and can be easily set either in the cabin or using the remote control key or the Volvo On Call mobile app. Thought of everything, haven't they.... And if at any point running in Pure mode you need a real shove in the back, simply press down hard on the accelerator and the conventional side of the hybrid will punch in a 212bhp boost.

Select the Power mode and you'll get something else altogether — a gratifying five-pot burble from the twin tailpipes that's in keeping with its full-house 281bhp (in the Power setting the diesel's 212bhp and electric motor's 69bhp work in unison to deliver faster acceleration and sportier behaviour).

Make best use of Power mode and you'll find the Plug-in to be quicker off the mark than many a hot hatch. However, let yourself be seduced by the lure of Power (with its near-instant throttle response and smoothly slurred upshifts from the six-speed autobox) and you certainly won't be seeing three-figure economy but something more like our 39.6mpg overall test average!

Thankfully the serene motoring served up in the all-electric mode doesn't mean just mooching along — 60mph is available for approximately 30 miles between charges.

Particularly enjoyable in Pure mode is the Plug-in's ability to rocket forward in near-silence, courtesy of the instant torque on tap from the electric motor (unlike a conventional powerplant, there's no waiting for the revs to build). It's also a cost-effective way of conserving the diesel fuel in your tank in heavy-going, stop-start traffic.

One of the most frequently voiced concerns of motorists considering a hybrid is: What happens when you've used up all the electric power? No problem; the Plug-in automatically switches to diesel power. Another understandable worry is range — but even if all your Plug-in's juice is gone, the diesel alone will still take you a further 500+ miles.

Technophobes, never fear — all the Plug-in's state-of-the-art high-tech electronics and software is firewalled out of sight but still easily accessed and monitored via conventional-looking controls and switchgear.

To all intents and purposes the V60 Plug-in is a perfectly normal family estate car; one that can be on your drive for Ł44K (that's after taking advantage of the Government's Plug-In Car Grant, which knocks Ł5K off the Ł48,775 on-the-road price). Externally, the only give-away that the Plug-in is not an everyday V60 is the additional 'fuel' flap on the nearside front wing (where you plug in the charging lead).

Physically, the hunkered-down Plug-in is a rival for the Audi A4 Avant and BMW 3 Series Touring, although neither of them offers a multi-mode hybrid set-up. In the metal, the V60 has strong kerb appeal — and with its premium cabin, it's a worthy contender against even the Audi and BMW.

Inside, it's all pure Volvo; Scandinavian style enhanced by high-end trim materials and large, fabulously cosseting sports-style seats. A long-time Volvo strength, they guarantee you'll be as fresh when you reach your destination as when you first set out — irrespective of the distances driven.

Plug-in cabin life, in spite of the mass of high-tech gadgetry on offer, is uncomplicated by design. The infotainment system, for instance, seamlessly combines navigation, audio, mobile phone and other functions via a 7-inch colour screen set in the upper part of the centre console for easy viewing and minimal distraction; to this end all functions can also be controlled from the steering wheel, or by controls sited directly below the screen. DAB is standard, as too is the hands-free Bluetooth.

Another classy touch is the customisable crystal-clear TFT digital 'dash' display directly ahead of the driver. This offers drivers a choice of four themes, including Eco with green background illumination. Our favourite, the red-coloured Performance, replaces the central speedometer of the Elegance and Eco versions with a rev-counter. In Performance, road speed is displayed in large figures in the centre of the rev-counter, as are speed limit road signs and the currently selected gear. Essential and brilliant. Other themes are the self-explanatory Elegance and a blue-illuminated Hybrid display that shows key Plug-in information.

Volvo's trademark 'floating' centre console, with four rotary controls flanking the central keypad, is still an eye-catcher and underscores the sophisticated cabin ambience — and you don't need to touch any of the trim to know that it's all made from high-grade materials. Fit and finish is first-rate.

Settle behind the wheel — the driving position is first class, as is the thick-rimmed, leather-wrapped multifunction steering wheel — and you'll soon find that this estate is not just about letting you be Mr (or Mrs) Clean, Mr Muscle or Mr Versatile (depending on which driving mode you've engaged), but is in itself a thoroughly decent drive.

The chassis is the same Dynamic item fitted to its conventionally-powered V60 stablemates, with fully independent suspension, Dynamic Stability and Traction Control (to help stop skids and slides) and Corner Traction Control which sharpens handling by using torque vectoring to improve turn-in — when taking a curve, the inner driven wheel is braked at the same time that extra power is fed to the outer driven wheel.

The steering is accurate, enhancing the feeling of predictable agility, and there's as much grip as you need thanks to the on-demand all-wheel drive. For the record, the electrical four-wheel drive is activated by pressing the AWD button on the centre stack.

The brakes are fine — no drama however you stop; whether it's a planned slowdown, or an out-of-the-blue panic stop. The suspension set-up, while sporty enough for press-on types, does clearly favour ride comfort — no bad thing given the UK's 'war-zone' roads. In fact, the majority of the V60's damper tuning was carried out in the UK. Handling is competent and bends can be tackled with some brio; it's also deceptively easy to get a real move on.

The Plug-in's pairing of luxury with an unruffled driving experience is best appreciated cruising motorways, where its reassuring deportment and high-speed stability (and quiet power delivery, particularly in the near-silent electric mode) lets you appreciate the amazing 'chill-out' chairs. Put legs on them and they'd be perfect indoors, although you'd run the risk of never wanting to get out again…

All those travelling in the Plug-in enjoy decent headroom, generous personal space and fine leather seats. Those up front get three-stage heated seats and comfy outer armrests to accompany the equally comfy centre armrest. The handbrake is electric, so there's more space for cupholders and storage.

You rear passengers will be more than happy thanks to the relaxing backrest angle, civilised headroom and legroom, generous space for their feet, dedicated A/C vents, a wide rear folding armrest with flip-up cupholders and built-in spill tray in case the chauffeur is enjoying himself too much. Even a third in the middle will travel well, and young passengers can use the pop-up 'boosters' incorporated into both outer rear seats.

When it comes to bodies versus baggage, the Plug-in offers plenty of options thanks to its versatile 40:20:40-split rear seat layout. Yet another very handy feature, for those tricksy extra-long items, is the fold-flat front passenger seat. A large central load-thru hatch adds to your load 'n' carry options.

Lift the easy-rising tailgate and you'll find less room than in an 'ordinary' V60 because the Plug-in's battery pack (that, by the way, comes with an 8-year/100,000 mile warranty) has to go somewhere; and that somewhere just happens to be under the loadbay floor. But there's still 445 litres (laden to the roof; or 305 to the window line) with passengers in the back, or 1,126 litres with the rear seats folded.

Even the family pooch has been taken into account — there's an easily removable built-in dog guard and, should you need to, the Plug-in can tow a hefty braked 1,800kg. If you do, there's Trailer Stability Assist to counter any dangerous 'snaking'.

Adding to your peace of mind, there's no denying that whatever road you find yourself travelling down you'll be in a car with impeccable safety protection — the Plug-in is jam-packed with both active and passive safety assist systems headed-up by its City Safety low-speed (up to 31mph) collision prevention system.

There's a host of safety devices and driver aids, both standard and optional, including Collision Warning with automatic braking (like City Safety but designed for higher speeds and motorways), Pedestrian and Cyclist Detection (also with full auto brake), Lane Departure Warning, Blind Spot Information, Cross Traffic Alert (warns of traffic crossing from the sides when reversing out of a parking space), and Active High Beam (lets you use main beam without dazzling oncoming drivers).

Volvo's most technologically advanced model, the V60 Plug-in is far more than just a very convincing member of the 'green' party — it's safe, fast, comfortable and very refined, and an adaptable load-lugger than can satisfy three very different types of users: those with a 'green' conscience; drivers with a penchant for some 'muscle'; and those practical but discerning motorists with a need for a socially-acceptable load-lugger. — MotorBar