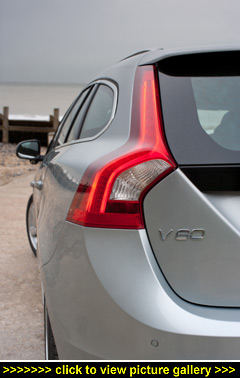 “The long climb-back to popularity
for the Swedish Volvo brand in the
UK is well under way. And now the
impressive S60 is joined by the V60
five-door estate...”

TRADITIONALLY, UK CUSTOMERS FOR VOLVOS have chosen versatile and roomy estate models over saloons. Today that has changed as the Swedish brand has introduced a much wider range of models from DRIVe lower-CO2 emission models to XC SUVs.

The introduction earlier this year of the S60 compact executive four-door saloon, a nominee for the 2010 European Car of the Year title (and already voted Scottish Executive Car of the Year), has widened the buying audience of the rejuvenated Volvo brand and pushed their UK sales up this year by almost 20 per cent.

Now the V60 estate version of the S60 joins the market — the company expects to sell around 5,000 of them in the UK next year. Volvo continues its estate car presence, of course, with the V50 and V70 which sit either side of the new range in both size and price.

The V60 costs from Ł23,145 up to Ł37,895 for the small-selling 3.0-litre petrol all-wheel drive version. The main selling model, expected to take 35 per cent of sales, is the D3 2.0-litre 160bhp turbodiesel version with SE specification priced at Ł26,960. The next grade up — SE Lux with the D3 engine, priced at Ł28,760 — is equally popular with early adopters who traditionally go for a higher specification version.

Competitors will, in the main, be the premium brand estate versions of the Audi A4, BMW 3 Series and Mercedes-Benz C-Class. However, improved models from volume makers such as the Toyota Avensis, Vauxhall Insignia (and now also the new Astra Sports Tourer), the VW Passat and the Ford Mondeo are all in the mix for sales in this medium-sized estate sector.

The V60 follows the visually pleasing sporting lines of the four-door S60 Saloon. The coupe side silhouette is still there so this is not a saloon with a load box grafted onto the rear. It does use the same platform, engines, running gear and suspension layout so the sharp handling characteristics are not dulled. However, the V60 is not the typical Volvo estate — big and roomy — we have been used to. Its sloping forward rear tailgate and smallish rear quarter side windows mask its dual role.

"This car is not designed to carry big loads," says Malin Schwartz, Volvo's Commercial Project Leader. "We have a V70, XC70 or XC90 in our range that can do that. Rather, it's a stylish, dynamic vehicle that offers more carrying capacity and versatility than a typical saloon or hatchback."

A Volvo estate that starts with the driver rather than the loading capacity is clearly a departure from the norm. "Volvo estates used to be designed to carry fridges," says Design Director Peter Horbury. "But modern lifestyles make that unnecessary. Retailers nowadays normally deliver fridges! We clearly see the need to continue to offer vehicles that can carry big loads, but that is not the role of the V60."

With an overall length of 4,628mm and seating space for four adults, perhaps five at a pinch, there is just 430 litres of load space with the 40:20:40 rear seats in place. Fold these fully down and the load area increases to 1,241 litres; not big in this class by any means so some people will see it as a case of style over function. But the extra load area is a neat addition and continues the overall sporting stance of the S60 into the V60, so visually it is very smart.

Smart and also safe. The safest Volvo Estate yet, claims the manufacturer — and with some substance to back that up. A Volvo estate whose design starts with the driver may be a departure for the Swedish company; a major safety advance should come as less of a surprise.

The all-new V60 is the world's first estate to offer Pedestrian Detection with Full Auto Brake — the innovative technology first introduced on the S60. A digital camera and radar are used to scan the road ahead. If they detect a pedestrian, and the driver fails to respond to warnings, the car will self-brake. I've never seen this system fail during demonstrations or in my use during controlled tests but I understand there have been hiccups — now fully ironed out, say Volvo.

Other safety technologies include City Safety (which avoids low speed impacts up to 19mph), Driver Alert Control to alert drivers who are tired or distracted and Blind Spot Information System which helps detect vehicles in the rear blind spots on both sides of the car.

Additionally there's Lane Departure Warning, which alerts drivers if the vehicle runs across the lane markers without the indicator being used, Active Bi-Xenon lights that follow the bends in the road and numerous secondary safety features including seat-mounted side airbags, improved inflatable curtains and Volvo's patented whiplash protection system are all available. I would expect nothing else from Volvo.

In addition to all the safety features, essential cabin kit such as air conditioning, electrically-operated windows and mirrors are all standard-fit items. The driver's area has a 'cockpit' style instrument and control layout with the centre console canted towards the driver for ease of use.

The V60 is just like the S60: beautifully put together, solid, high quality and with excellent attention to detail. There is some annoying wind noise from the front A-pillars or door-mounted mirrors but generally the interior is a nice place to be if somewhat 'cosy' when fully loaded.

Handling is sharp, precise and well controlled. Ride comfort is generally good with only the worst of UK road surfaces causing the ride to become ruffled with some road noise intrusion — but it is better than most of its competitors for ride quality if not for out-and-out estate car load space.

The five-cylinder, common-rail direct injection turbodiesel engine will be the most popular unit and it offers 160bhp and 295lb ft of torque from just 1,400rpm. Unusually, this torque didn't give my D3 test car enough flexibility at low speeds; the grunt to pull away from a rolling speed out of road junctions or enough instant response during acceleration from low speeds.

That said, once the turbo got going it was fine. I assume it is because the transmission gearing is so high for lower emissions. Underway the engine was responsive and in 'the cruise' it was quiet and relaxed. And it's no heavy drinker — officially it gets through diesel at the rate of 51.4mpg (Combined Cycle); on test it averaged a still useful 40.8mpg.

Against? Some models are very pricey, load space is not nearly the largest in this sector, sluggish pull-away from low speed under some traffic conditions and wind noise intrusion. Plus points include style, quality, high safety specification, comfortable, feels solid and well-planted handling. — David Miles