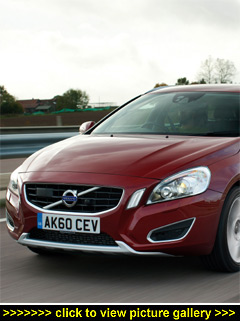 “Volvo has acceded to the lifestyle
imperative and produced an estate
that delivers a convincing premium
experience...”

SOMEONE PASS THE CAMOMILE TEA — I'M IN SHOCK. My world has been rocked, and disturbingly, it's been rocked by a Volvo. I'm recovering from the shock of Sweden's newest estate car, which is… not shaped like a shoebox.

After 60 years of employing stylists from Kleenex, Volvo has discovered that 21st Century designers now have the technology to use curves in estate car designs. This is a remarkable first for Volvo — a surprise of the same magnitude as, say, getting an invitation to Dale Winton's wedding to Jordan.

Okay, maybe not quite that shocking. And Volvo doesn't want to appear too outrageous, so the new V60 has none of the angularity of an Audi or the boldness of a BMW. The V60's designer, Orjan Sterner, claims it has coupe styling cues but let's be honest here; that's going just a step too far. The shape is clean but it's inoffensively un-flashy. It's reassuringly Volvoid bland.

I absolutely love the V60's cabin. It has all those elements of Swedish design that we've come to love — simplicity, elegance and harmony, without any unnecessary flourishes.

If this is beginning to sound like an advert for high-end furniture, that's not too far from the truth. Sitting in the V60 is like living in a BoConcept catalogue. And there's one of the clunkiness that solid Scandinavian styling can sometimes take on.

If Volvo has made a leap in design terms, it's also getting on the case in the chassis department. Not so very long ago, Volvo's chassis performance was so compromised that it felt forced to fit a four-button system on the console to allow you to toggle between chassis settings, each more ineffective than the last.

You'll be pleased to hear that, on the evidence of the V60, those days are gone; Volvo has at last employed some decent suspension engineers. Although you can still opt for Volvo's 'Four C' chassis system, you'd be daft to do so because the V60 is so good it really doesn't need it.

The V60's front-wheel drive set-up feels rather like an Audi. The handling is safe, fluid and unfussed. The steering has a chunky feel to it. It's all most un-Volvo-like. Apply too much power through a bend and there's the inevitable understeer, accompanied by just a little more body roll than you'd expect from a Beemer, but the V60 delivers a convincing premium experience.

Ride quality is even very decent. Major mid-corner bumps don't affect the car too much, although you can certainly feel the activity in the suspension. Apparently the V60 has been tested on UK roads — notoriously the most challenging in Europe — so it feels as at home in the ancient market town of Builth Wells as it does in Buckingham.

UK buyers are almost all going to opt for a diesel, which as ever with Volvo is a five-cylinder unit (either 2.0 litres in D3 guise or 2.4 in D5 form). The D3 engine is actually the better of the two. Despite its relative lack of power (160bhp versus 202bhp), it's remarkably close on peak torque (295lb ft against 309lb ft) and that peak is actually developed lower down the rev range.

So in real-world driving terms, the D3 is the virtual equal of the D5. Although both engines return the same fuel economy with a manual gearbox (a pretty remarkable 53.3mpg), the D3 is more economical if you want automatic transmission (47.9mpg). That said, the D5 does have more oomph and an easier cruising gait.

Now, what about practicality? Antique dealers of Britain, the V60 is not for you. Volvo has acceded to the lifestyle imperative and that swoopy roofline does compromise luggage space.

There's a mere 430 litres of boot space (up to the window line) and even when all the seats are lowered, the maximum you can fit is 1,241 litres. To put that in perspective, the bigger V70 can take 1,600 litres. Boosting adaptability a little, the V60's rear seat has a 40:20:40 split and the front passenger seat can fold down too.

Volvo's usual complement of safety gear is further boosted by the arrival of 'Pedestrian Detection' that automatically brakes the car if it detects jay walkers. The only downside is that the system uses curious black boxes that look like warts on the front grille.