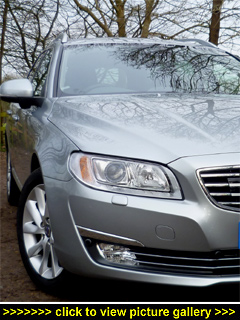 “There’s something appealingly
indomitable about Volvo’s evergreen
estate, the V70. Still the ‘classic’
big estate car, it’s good enough to
make you become an antiques dealer
just so you can drive one...”

ACTUALLY, THESE DAYS IT'S NOT just antiques people who you'll find behind the wheel of a V70. While the Swedish brand's wagon is now as undeniably 'premium' as a BMW 5 Series or Mercedes E-Class load-luggers, there's not the least hint of pretentiousness about the Volvo.

With the proliferation of less practical 'sport' and 'lifestyle' estates, the recently refreshed V70's substantial contemporary lines give off a reassuring air of confidence. Highlighting the abilities underpinning its dual-usage bodystyle is the fact that numerous police forces tend to favour them for fast motorway Traffic patrol duties.

But while it may look hewn from rock, the V70 is no gas-guzzler: the efficient new 2.0-litre turbodiesel powering the eight-speed automatic model we've been driving this past week comes with some impressive economy figures: officially it averages 62.8mpg.

Our hard-pressed test car acquitted itself well, notching up a very reasonable 47.3mpg real-world average — a sympathetic right foot should see an improvement on that. Note also that at steady speeds on motorways, even though not hanging about, it was consistently scoring 60mpg — close to its official touring figure of 68.7mpg.

Inside a big, wide cabin awaits. Five grown-ups are easily accommodated with plenty of headroom for all. In fact there's plenty of room in all directions.

In the front are a pair of extremely supportive leather-upholstered seats — the passenger gets seat height and base cushion angle adjustment, as well as lumbar; all manually adjusted.

The driver gets upgraded to full power 'every which way' adjustment with a three-setting seat and door mirror memory function. Both seats are shapely with decent bolstering that's defined enough to keep you located but not at all intrusive, have anti-whiplash headrests and quick-acting three-stage heating. The three-spoke steering wheel is multifunctional (voice, audio, media, cruise) with a good-to-grip smooth leather rim with good thumb cut-outs and paddle-shifters on the horizontal spokes for manual gear changing when you want to be in total control.

The view forward through the windscreen is uninterrupted, as too is the view of what's behind — a view also well covered by the frameless rearview mirror. When the rear seats are not being used the rear headrests can be dropped forward for an even clearer view. Nice to know that the straightforward tail-end design (helped by the blind spot monitoring system) ensures a V70 driver will never be caught off-guard by the antics of a following vehicle.

It's a quality cabin — cooly logical Scandinavian design enhanced by the inviting ambience of fine materials, well-considered and well-executed, and all assembled with noticeable care — you won't find anything flashy, glitzy or gaudy inside a Volvo!

Good, also, to be able to turn off the automatic three-flick lane change signalling (to fully manual) as well as personalise things such as auto-dipping of the door mirrors when reversing and whether all the doors or just one unlock on demand.

You can, of course, take for granted a rear parking camera as well as front and rear audible sensors and other essentials such as SatNav, dual-zone climate control, leather upholstery, one-shot power windows, auto-dimming rearview mirror, powerfold door mirrors, Bluetooth, DAB radio, cruise control, and a top-of-the-line Premium Sound system as well as a powered self-opening and self-closing tailgate.

Volvo's trademark 'floating' centre stack is wider than in smaller Volvos, providing better spacing for the switchgear and the four knurled knobs that between them control seat heating and cabin temperature, media, navigation, and menu scrolling.

Other equipment, such as the sharply-detailed and driver-reconfigurable TFT instrument display (choose from Eco, Elegant and Performance themes and data), look appropriately upmarket.

There are plenty of nice touches including a padded centre armrest that's wide enough for the driver and front passenger to happily share, and which has catches either side so it's easy to open whichever side of the car you're on (it also flips back 180 degrees to provide a sturdy tray for rear passenger usage.

Below the armrest is a deep lined storage bin with USB and Aux-in sockets and ahead of it a sliding-lidded bin with two built-in illuminated siamesed cupholders, plus a 12V power socket.

And while many drivers still have a 'thing' for a traditional handbrake, the V70's 'push on' electric park brake on the fascia to the right of the wheel really is so easy to use that it's hard not to like (plus you can drive away without manually releasing it so long as you're belted-up).

The infotainment screen in the fascia is comfortably in the driver's eye-line and the mapping is pin-sharp; spoken commands are delivered in good time and full postcode destination entry is a boon. As is the keyless start and entry which means the key need never leave the safety of your pocket or handbag.

For those who like to stay 'connected', the integrated Sensus Connect system offers them a number of innovative functions; for instance, the cloud-based services allow the driver to find and pay for parking from the car, discover new restaurants at the destination, stream favourite music seamlessly, and much more. Text messages can also be read out aloud.

Those in the back are equally well catered for. Getting in is easy thanks to the large door frames (no head-banging) and once seated there's masses of room to lounge in — plenty of knee room and, despite sitting four inches higher than those up front, several inches of headroom (even a third adult in the middle enjoys generous hip- and head-room) plus two can both make good use of the wide and well-padded armrest (with storage!) between them.

Those who like to sip an Americano or skinny latte en-route will value the cupholders in the armrest (complete with a 'just in case' spillage tray beneath them); those who prefer to drink from a bottle can keep one in the door pocket.

The dedicated air vents in the B-pillars keep the temperature right, and clear views out both to the sides and ahead through the large space between the front seatbacks keep you in touch with the outside world when you're not watching a DVD.

The excellent twin 8-inch screens and DVD players with WiFi headphones built into the front seat headrests are well worth the extra Ł1,495. V70 drivers with children will be glad of the easy-peasy pop-up booster cushions fitted in both outer rear seat bases. Power-operated driver-controlled child locks on the rear doors add genuine peace of mind given how inquisitive little fingers can be.

The new D4 2.0-litre four-cylinder turbodiesel is refined and pokey: 178bhp backed-up by 295lb ft of torque from 1,750rpm ensures plenty of 'grunt' when pulling away and overtaking. Used hard it will spin up the numbers displayed on the digital speed readout surprisingly quickly. Best to set the speed limiter on motorways or you could find yourself being 'pulled' by one of the blues-and-twos V70s…

Two extra gears help tremendously — not only is the most appropriate ratio always to hand, but the shifts move smoothly both up and down the eight-ratio scale, either to serve up the sharpest acceleration or to quickly reach the most efficient gear for fuel economy or unruffled motorway cruising, all depending on what orders your right foot is giving. Nudge the selector lever into Sport mode and the D4 responds eagerly to the accelerator, immediately dropping to a more appropriate lower gear as it ups its attitude and the pace.

The V70 D4 will hit the benchmark 62mph from standstill in 8.6 seconds; top speed is 137mph. And it feels 'gutsy' enough two-up for you to know that it will manage a full load of cargo or people with equal vigour. Equally satisfying is its totally legal tax-avoiding 117g/km emissions which keeps your road tax bill to an annual £30 after the first year which is free.

Dynamically, everything you'd expect of a 140mph car is present and correct; the front-wheel drive chassis copes equally well with just the driver or the full family unit aboard; the all-disc brakes serve up reassuringly powerful stopping; there's decent grip from the 225/50 rubber wrapped around the 17-inch alloy wheels; and the three weightings you can select for the steering are all effective and appropriate.

Press-on drivers might like to know that more sporty chassis set-ups can be specified: there's a lowered Sport chassis and Volvo's Four-C (Continuously Controlled Chassis Concept). For the record, the default Dynamic chassis is fine.

The V70 is built not just for lugging but for comfort too, and as such is in its element loping along a motorway. Its supple ride and steadfast steering ensure both its driver and passengers (and even its cargo) get from A to B as composed as the V70 itself.

At speed the cabin ambience remains refined while the seats cosset you as the world flows by your window; passengers can take in the views or doze, as safe and relaxed as if they were at home in their favourite armchair. With the optional Harman Kardon premium sound system playing in the background, it's first-class all the way!

Famed for its load-carrying ability, the V70's boot doesn't disappoint. As the tailgate rises under electric power (triggered remotely via the key fob or the dashboard switch), your first impression might be that the boot isn't that deep.

But first impressions can often be deceiving; the giveaway is the low, knee-height loading sill and, tellingly, the 724mm maximum cargo height. A flip-up centre panel can be raised to divide the rectangular-shaped 575-litre boot in two — useful when transporting more fragile items or simply segregating your weekly shop.

If you've a big load to be shifted then fold down the versatile 40:20:20-split rear seatbacks and you'll have a wardrobe-swallowing 1,600 litres of absolutely flat-floored space at your disposal. Side rails in the floor allow the tie-down hooks to be positioned exactly where you want them, and they're easily repositioned in seconds.

Beneath the main boot floor you'll find a very handy multi-storage tray of the same length and width as the boot itself. And if you ever need to transport an extra-long load it's no problemo because the passenger seat backrest also folds down flat. Finally, if you prefer to pull your cargo along behind you instead of carrying it inside, the V70 will tow 1,800kg braked. A 13-pin detachable tow bar is optional.

Volvo once used the tag-line that the V70 was designed to cater for the average family unit of two adults, 2.4 children and a dog. Social stats may have moved on in the twenty-first century but the pooch hasn't been forgotten — behind the rear seatbacks is a full-width cassette with a pull-out netted dog guard. Lassie would approve!

As far as comfort and space go, the elegantly-packaged V70 is 'the man'. It also scores highly for versatility and, of course, its safety credentials are the best in the world. Few cars are better at moving cargo or people as pleasingly as a Volvo V70. — MotorBar