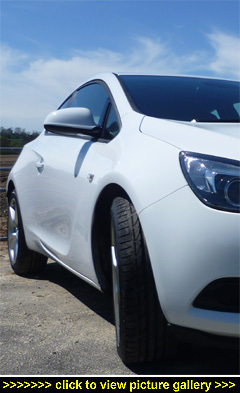 “Like New York, Vauxhall’s Astra
GTC is good enough to be named
twice — not least because this
stand-out three-door sporting hatch
from the Astra bloodline is the best
looking filly in the Vauxhall stable...”

IF YOU KNOW YOUR SUPERCARS then the 'GTC' tag will ring a bell: that's right — as in Ferrari's racer, the 458 Italia GTC. Nice linkage, Griffin! Actually, while it's no prancing horse, the Astra GTC has a lot going for it.

For starters, it looks the biz. Seriously so when finished in the dazzling white of our test car. If you're not a car buff then you might not even recognise it as an Astra. Does that matter? Not a bit; the important thing is that it's caught your eye. As it would.

Even stationary, the GTC stands out. Its size — 14ft 8in long and just over six feet wide (2" longer and 1" wider than its five-door hatchback sibling) — only adds to its presence. Then there's the deceptively swollen wheelarches, packed out by 235/45 5-arm 19-inch alloy wheels (18-inchers are standard) and the low-down, road-hugging stance neatly curtailed by the artfully truncated tail.

While Vauxhall will gladly sell you a GTC with the power (180bhp and 0-60mph in 7.8 seconds) to justify the go-faster looks, they'll be just as happy if you buy one of the more economical versions — a 1.7 turbodiesel, for instance, as reviewed here. And while this version won't bust your credit card limit wide open, it will still provide some very real driving satisfaction. Sounds like a win-win situation…

Running costs will be a key factor for those going down the diesel GTC route. No problem. This 1,686cc in-line four turbodiesel will endear itself to the Scrooge in you with its official extra-urban 68.9mpg and combined 62.8mpg; even urban driving holds out the possibility of 54.3mpg. So, what did we average during our week with the GTC? A not-to-be-sniffed-at 47.3mpg — not bad given the large number of city miles covered and that a good time was had by all who drove her.

And, thanks to the tax-cheating 119g/km of CO2 it emits, you won't pay a penny for the first year's road tax; even after that it's still only a paltry Ł30 per year.

Performance-wise, the 1.7's 128bhp and muscular 221lb ft (on song between 2,000-2,500rpm) will see you pass 60mph in ten seconds dead before taking you on to a maximum of 122mph. Running up through the gears is no hardship; the six-speed manual 'box is an easy changer.

A quiet 70mph at 2,000rpm in 6th gear benefits fuel economy on motorways while decent in-gear flexibility makes it easy to drive in town, where the standard-fit Start/Stop system ensures not a drop of fuel is wasted in stop-go traffic.

The ready-to-rumble looks are great — but is it? In a word, Yes. And for two very good reasons. First, the GTC's suspension and steering has been specifically-tuned for UK roads by Vauxhall's Engineering Centre. Second, the 'HiPer Strut' front suspension used on the Insignia VXR has been fitted to reduce torque steer (we never encountered any) and improve the GTC's roadholding and steering.

On the road it works very well, serving up plenty of grip through bends that, combined with sharp steering and well-controlled dynamics, makes it fluently sporty and fun. The best bit is that you always feel it's you, the driver, who's in control — no tail (or nose, as it's front-wheel drive) wagging the dog!

The eternal trade-off between ride and handling is also well managed. While the ride favours the handling it's nonetheless supple and surprisingly refined, dealing with second-rate broken British blacktop in a manner that maintains a decent comfort level for all aboard.

Our GTC was fitted with the optional 19-inch alloys and in spite of them it rode remarkably well. The brakes also deserve a mention — they're potent and, as we discovered when forced to make a full emergency stop at 50mph, take all the drama out of a crisis.

While the GTC looks great from outside, handles as well as it's exterior promises and drives as satisfyingly as the 'GTC' tag suggests it will, is it a glorified 2+2 or a genuine four-seater?

Another pleasant surprise — while the raked screen and low roofline look as if they come at the expense of headroom, they don't. Pull open one of the long doors and you'll find a cabin neatly trimmed in good quality materials, loads of room for people as well as ample storage solutions for 'stuff' and a centre stack that's not as 'busy' as it first appears. The four chrome-edged dials are easy to read and night-time driving is enhanced by ambient red lighting. The cloth-upholstered front seats are supportive and comfortable on even very long journeys, plus the outer armrests are wide enough for your front passenger to spread out and park their arm.

Visibility to the front and sides is fine without too much restriction from the tapering rear windows and heavy C-pillars, although you'll certainly want to tick the box for front and rear parking distance sensors — a Ł385 option.

The steering wheel is not leather-rimmed but of a nice feel with remote control buttons on the spokes for cruise, speed limiter, voice, phone, volume, and source.

Push the horn and you'll be rewarded with an assertive two-tone bark. Our test car was also fitted with the optional SatNav and it worked a treat.

Opening the doors fully to let passengers into the rear can be awkward in tight car parks but getting into the rear cabin is easy enough after folding either front backrest and sliding the seat forward. Once in, there's enough space for two adults with usable room for feet, knees and legs — and they'll be able to sit comfortably without any head-bowing. Given the small rear side windows, it's not at all claustrophobic travelling in the back. The middle rear position is usable for a slim adult but seating three side-by-side in the back is best reserved for youngsters.

So, the GTC really is, as it says on the label, a full four-seater — plus there's more than enough room for four people's luggage in the 380-litre boot. Surprisingly, that's bigger than the boot you get in the five-door Astra hatchback (351 litres).

The rear hatch opens high but you'll need to lift luggage up and over the six-inch boot lip — not a problem for shopping and personal luggage. If you need to move larger amounts of cargo, the 60:40 split rear seatbacks fold (although not quite flat) to offer a pretty commodious 1,165 litres. Should you ever get a puncture, you'll find a space-saver spare wheel under the boot floor.

All in all the GTC is a well-rounded package that will suit keen drivers, particularly those with family responsibilities. For their head, it's functional, practical and affordable; for their heart it's stylish and involving to drive. — MotorBar