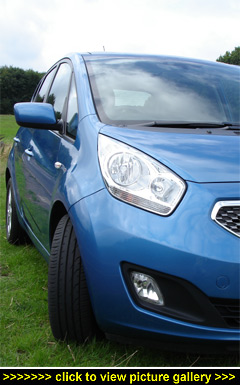 “Downsizing is now so widespread
that car manufacturers have
capitalised on the concept.
Need something more compact?
With more room than your previous
car, more fuel-efficient and less
expensive? No problem — we have
just the Venga for you...”

MOST POPULAR WITH DOWNSIZERS are the stretched supermini (Ford Fiesta-sized) hatchbacks that, due to increased headroom and load space flexibility and often with the added benefit of sliding rear seats, are closer to personalised MPVs and as such perfect for families or single-nesters who like to keep all the angles covered.

Cars like Kia's Venga. Designed by Kia's ex-Audi design director, Peter Schreyer, this tall, good-looking five-door hatchback packs a long wheelbase into its overall length. And, like a Russian nesting doll, into the long wheelbase is packed a versatile cabin into which can be packed four passengers and a driver. A neat trick given the Venga's four-metre overall length.

Climb aboard and you won't think 'downsizing' for longer than it takes to admire the black-themed cabin with just enough silver chrome highlights to stay on the right side of tasteful. A deep fascia and a centre stack, that merges neatly with the raised gear lever housing, keeps all major switchgear, including the 'all-in-one' climate control unit, within easy reach of the driver and a cinch to use on the move.

A digital strip along the top of the centre stack displays average mpg, range, trip data, external temperature and the time. The air vents are nicely damped with rubberised control wheels, and instrument graphics are crystal clear.

Upholstered in a black fabric with workmanlike side bolstering and subtle but smart grey piping, the sporty-looking seats, set high off the floor, are very comfy with good under-knee support. For sure, Venga drivers aren't hard done by — a good range of driving positions is possible thanks to the height-adjustable seat, height and reach adjustment of the grained leather, multi-function steering wheel and height-adjustable front seat belts. Appreciated too is the dedicated inner armrest that, commendably, doesn't get in the way of the traditional handbrake.

Plus there's plenty of room in all directions — particularly welcome around the knee area. Another big plus point is A1 visibility ahead (even though you can't see the bonnet; only the base of the windscreen) and to the sides, helped significantly by the distinctive teardrop-shaped quarter-lights.

It's also very airy aboard the Venga — out test model came with a panoramic glass roof that starts at the header rail and runs all the way back to above the rear headrests. The front section slides open (or, should you prefer, tilts) at the touch of a one-shot button. Concertina baffles minimise noise and draughts from the sides of the roof when in the tilt position. Another nice touch; each half of the roof has its own dedicated sunblind.

As befits a family-orientated car there's an impressive array of storage solutions, starting with a large glovebox with cupholders on its inner lid and on the upper shelf. Deep open bins separate the front seats and together hold a remarkable amount of 'stuff', as do the large door pockets.

The Venga's stand-out feature — interior space — confirms its 'fit-for-families' character; most appropriately in the rear cabin. Here passengers can enjoy stepped backrests and a fold-down centre armrest along with outer armrests in the door panels. A fourth 'opera' rear side window lets in extra light. More good news: the rear window glasses retract fully into the doors, there's loads of leg and knee room as well as good foot room under the front seats, and ample space for bottles in the door pockets.

The 60:40 split/fold back seats slide and recline: even with them set to a mid-point there's adequate legroom for adults; with them all the way back even very tall adults can stretch out, then get even more comfortable thanks to the adjustable seven-position reclining backrests. All this and generous headroom too!

'Versatile' is definitely the watchword inside the Venga's deceptively compact bodyshell: the fore-and-aft sliding rear seats allow for easy adjustment of the people-to-parcels ratio. If they want to, rear passengers can enjoy an extra 130mm (approximately five inches) of lateral room; alternatively, if parcels (or luggage or a carryout from the local DIY store) needs to take priority, an extra 130mm of load bay space is there for the taking.

The rear 'piggy-in-the-middle' spot has a proper belt and headrest and, thanks to there being no transmission tunnel, offers good foot room and makes it peasant to use. As in every car, with five on board this position is always better for kids than adults. And there's even a benefit for the driver: the three rear headrests all sit low on the seatback when not in use.

Another welcome touch is the two-tier boot — just what the doctor ordered for those times you must take passengers but need that extra bit of cargo space over the standard 444 litres.

By lowering the boot floor shelf the boot is expanded to a more accommodating 570 litres. Position the shelf at its uppermost point and it sits level with the rest of the loadbay floor. In this setting you can also utilise the 126-litre 'lower' boot which provides a useful out-of-sight underfloor locker — accessed easily via a pair of lift-up 'lids' that together form the two linked halves of the movable boot floor panel. Dip deeper and you'll find a 'skinny' (space saver).

Also making life simple are fold 'n' dive rear seats: at the pull of a lever they fold into the floor (with headrests in-situ) to create a very spacious 1,253-litre cargo bay that has the added benefit of a completely flat, full-length floor.

The Venga offers a choice of three powerplants, all four-cylinder units: two petrol (89bhp 1.4 and 124bhp 1.6) or, as tested here, an 89bhp 1.4 diesel. Given some of the high power outputs present in many even quite ordinary cars these days, 89bhp doesn't sound that much. That said, the MINI One diesel (1.6-litre) manages very well with 90bhp.

It takes the 1.4 CRDi Venga 14 seconds to reach 60mph from standstill but its 163lb ft of torque, available from 1,750rpm, makes it fairly strong and flexible at low to mid range. It's also more than capable of keeping up with the traffic on 50+mph A-roads.

Add to that a decent set of gear ratios in the six-speed manual 'box along with a light and positive change action and it's easy to make the most of what's under the Venga's bonnet. For a 1.4-litre diesel unit it's also pleasantly muted at both tickover and low revs.

And not too hard on the jungle-juice, either. On paper this model should average as much as 62.8mpg (urban 54.3, extra-urban 70.6mpg). Our test model was fitted with Kia's EcoDynamics ISG (Intelligent Stop & Go). Helpfully, for those times you're stuck in a slow-moving queue, it can be switched off. Other fuel-saving measures include fully electric power steering.

On the road, our test car returned an overall figure of 44.7mpg which, given our punishing driving style, should represent a can-do-better figure for the average Venga owner. We don't want to win any prizes for driving economically because we'd rather tell you a worst-case figure — one you can, like the Beatles, make better.

With prices starting at Ł11,495 and topping out at Ł15,500, most buyers can afford to move up a trim level. Trim levels are foolproof: '1', '2' and '3'. Models with level 2 trim come with 16-inch alloys, powered and heated door mirrors, steering wheel-mounted audio controls and an iPod cable.

Okay, so the Venga ticks the right boxes for flexibility and running costs but is there a satisfaction penalty once you're behind the wheel?

From time to time one needs to re-state the obvious: people who buy an economical family car aren't the same people who buy a BMW M3. Venga customers will have a totally different perspective on the world and won't be flinging their family wheels around a track on weekends.

No, that doesn't mean the Venga is unexciting to drive. Be guided by an expert: Michael Schumacher likes to tell the story of how he learnt his core driving skills in a Fiat 500 (one of the originals, not the current retro-remake).

Kia has gone to the trouble of tuning the Venga's suspension for British roads — and a fairly good job they've done, too. Spring rates are stiff-ish but most big bumps are heard rather than felt, and those aboard are rarely disturbed.

A broad track and low stance helps makes the 1.6m tall Venga a good deal more nimble than first impressions would have you expect; body roll is well contained, the grip good and it feels reassuringly attached to the blacktop when cornering.

The steering is fine — certainly fit for purpose — and the brakes (discs all round; vented up front) provide the reliable and reassuring stopping ability you'd want from a family car. All in all, the Venga proved to be an unexpectedly non-boring drive.

Venga customers, especially those with families, will also be pleased to know that downsizing Kia-style does not mean compromising your personal safety: front, side and curtain airbags are fitted as are active front head restraints and two ISOFIX child seat mounting points. Out of sight there's ABS with Electronic Brake-force Distribution, Electronic Stability Control, Brake Assist and Traction Control to keep you safe.

There's far more to the Venga than meets the eye, beginning with it's unexpectedly generous interior space. Add in its compact on-road footprint, comprehensive and versatile seating/cargo-carrying flexibility, high safety specification and Kia's seven-year, 100,000-mile warranty and the Venga is clearly not a downsize too far. — MotorBar