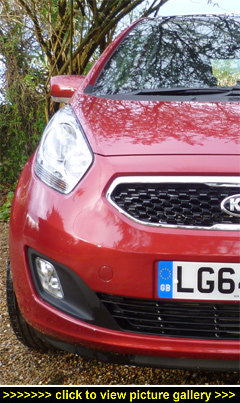 DESPITE MEASURING A SMIDGEN over four metres from nose-to-tail this compact supermini is the proverbial quart-from-a-pint-pot — practical, versatile and with enough space to suit a family, including a sizeable 440-litre boot.

A benefit of the Venga's high roofline and four-panel glasshouse body architecture over a conventional hatchback is the enhanced flexibility it offers; and not purely when it comes to seating — tumble the 'Fold & Dive' rear seats and in seconds you'll have a completely flat and totally usable 1,253-litre load deck.

The 60:40-split rear seats slide individually and enable you to increase the rear passenger space or boot length by up to 130mm in seconds whenever you need to switch priorities between people and cargo.

Access to the boot is via a high-opening tailgate and there's a luggage net and hooks to keep items exactly where you want them. Additionally, beneath the two-tier boot floor is a full-width, multi-section luggage tray.

For carrying bigger loads you can lower the floor (making it 163mm taller) which in turn increases the boot's volume from 440 to 570 litres. A space-saver spare wheel is also part of the deal — most motorists prefer one rather than a 'repair kit'.

Thanks to a long wheelbase and wheels close to each corner there's plenty of room inside; getting aboard is easy courtesy of big, wide-opening doors.

Once seated you'll love the airy ambiance, made significantly better by a fist of headroom between the top of your head and the electric one-shot panoramic two-piece sliding glass roof that floods the cabin with light — it covers almost the entire roof area; the front section opens fully and there are twin mesh sunblinds to keep you shaded should you prefer.

Safety is equally well addressed starting with front, front side and curtain airbags and active front headrests — commendable for a small car. Hill-start assist makes light work of pulling away on inclines while Electronic Stability Control and Vehicle Stability Management systems along with Brake Assist all keep the Venga safely on course. Speed-sensing automatic door locking, height-adjustable front seatbelts and a rear wash/wipe all add to safety as well as convenience.

The Venga's cabin is a pleasing place to be. Fit and finish is good and the ergonomics spot-on, all neatly incorporated into the smart contemporary fascia design. The lightly bolstered front seats, each with its own individual drop-down inner armrest (that don't cramp the traditional handbrake), are part-leather with 'Bamboo' patterned fabric centre panels that'll keep you cool on hot summer days and warm during chilly winter ones.

The higher-than-average driving position is a big plus and visibility out is first class, boosted by the large fixed quarter-lights between the front doors and the windscreen.

Unlike many car bodystyles trending today, it's easy to tell from the driving seat where the Venga physically begins and ends. Whether you park parallel nose-to-tail between other cars or door-to-door alongside them, parking the Venga is a doddle helped, of course, by a rear-mounted camera and audible parking sensors.

Rear accommodation is designed for grown-ups and three of them can travel in the back although two will fare better sharing the wide centre armrest; multiple angle backrests make for some lazy lounging in the back with no worries about headroom. Magazine pouches and usable door bins are also fitted.

While empty-nesters or even pre-nesters will be perfectly happy pootling around in a Venga, it's likely its strongest appeal will be to urban and suburban families with two or three young children. Whatever their social category, the person behind the multifunction leather-rimmed wheel (audio, voice, fone, cruise, speed limiter, and even a 'fave' button) will appreciate the high-contrast white-on-black dials (easily read on the move) and the easy-to-use infotainment menus.

The SatNav takes postcode inputs and in return gives you unmistakable spoken directions. A secondary display top centre of the fascia shows key trip information. Ample cubbies are on hand, including practical bottle-holding door pockets, cupholders and a large central tunnel storage bin. For a small car the Venga's cabin remains restful and the 1.6-litre turbodiesel is not at all intrusive when working away in the engine bay.

It's sharp enough in town and overtaking slower vehicles on faster out-of-town roads is simply a matter of being in the most appropriate gear. The Venga is a relaxing motorway machine, cruising quietly, smoothly and steadily at the legal limit. Top speed is a usable 113mph and the benchmark second zero-to-60mph is done and dusted in 11.1 seconds.

Officially the 1.6 averages 64.2mpg; after 500 miles in our test car the trip had recorded an overall average of 50mpg (actually 49.3). Diesel versions come with Kia's EcoDynamics fuel-saving technology aided by a stop-start system that helps make the most of every drop of fuel, particularly in and around town. Emissions of 117g/km help keep your road tax charges low (first year free; second year and onwards still just Ł30).

So, it's economical to run, will accommodate your small tribe space-wise, but ride-wise is it an '007' car? Will you arrive shaken but not stirred?

The good news continues because the Venga manages bumps without jolting and the usual trade-offs between comfort and handling are well balanced to the degree that the ride is good enough to soothe fractious little ones in child seats in the back — there's room for one either side (the two outer seats have Isofix child seat top tethers and anchor fixings).

Incidentally, getting kids belted-in is a no-hassle affair as the there's decent access through the doors even in car parks. The rear seats are also set high — not only does this help considerably when faffing around with child seats but it also benefits lower leg comfort on long trips.

More peace of mind for parents comes from having child locks on the electric windows and doors so you don't have to worry about inquisitive little fingers while you're concentrating on the traffic. And when your brood has outgrown safety seats, you'll be able to fit three in side-by-side.

We'll risk stating the obvious and say that the Venga — and many of its best rivals — are not hot hatches and won't be driven like them either. But Yes, you can press on safely along country lanes with minimal body lean. Just remember that if you want that 50+mpg then smooth driving is the way to get it.

In town the light (but thankfully not too light) steering, clutch and progressive brakes make for fatigue-free progress while the six-speed manual box's gearchange action is crisp and light. Threading the Venga through heavy traffic is a piece of cake.

A good-looking, appealing and very easy-to-live-with small car that's genuinely economical in the real-world, the Venga, like all Kia models, comes with a seven-year warranty — something that, for small families on tight budgets who intend to keep the car for a long time to maximise their outlay, will seal the deal. — MotorBar