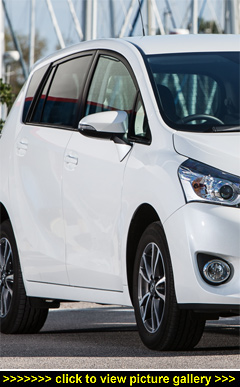 “Once the first choice as ‘holdall’
family cars, MPVs have fallen from
favour in recent years as status
conscious customers have switched
to the more desirable dual purpose
SUVs and Crossovers...”

PEOPLE SEEM TO LIKE THE STATUS of owning a 4x4 lookalike even though they've probably chosen a model with two-wheel drive, not four. Clearly, for many it's 'the look' that counts.

Like SUVs and Crossovers, the latest MPVs now come in three sizes: compact, such as the Ford B-Max; medium, like the sales-leading Citroen C4 Picasso; and large, such as the S-Max from Ford.

In the medium sector, as well as the C4 Picasso there is the new Ford C-Max and Grand C-Max, the Vauxhall Zafira, Renault Scenic and Grand Scenic models and, not to be overlooked, the Toyota Verso.

The Verso might not be at the top of the sales league in the UK but in other countries I see lots of them being used as taxis as most versions come with seven seats.

The latest Verso range is priced from Ł18,120; enough to buy you the base Active specification five-seater with a 1.6-litre petrol engine and manual gearbox. Prices rise to Ł25,000 for the Trend Plus 1.8-litre petrol-drinker with a CVT automatic gearbox and seven seats.

Most UK customers opt for the new 109bhp 1.6-litre D-4D turbodiesel engine from BMW which has a six-speed manual gearbox and seven seats. Trim levels are Active, Icon, Trend, Trend Plus and Excel, and with the new main-selling diesel engine these models range in price from Ł19,990 to Ł24,495.

The latest Verso is designed and engineered in Europe and built in Turkey. Since the original models were launched in 2002 over 650,000 have been sold in Europe and more than 52,000 in the UK. The current Verso was introduced in 2013 and in 2014 the engine range was revised with the new 1.6-litre diesel unit — with BMW DNA — replacing Toyota's own 2.0-litre diesel engine.

Now in 2015 the most recent upgrades include the addition of a new Trend Plus grade of specification which includes a family-friendly DVD rear seat entertainment system and leather upholstery. The more sophisticated Toyota Touch 2 with Go system — a standard-fit feature of the Trend, Trend Plus and Excel models — ramps up the kit content with a new navigation screen design, use of TomTom HD (with real-time traffic information to deliver detour prompts to avoid hold-ups), and new 'connected' services to gain better journey information. These include access to Google Street View and Panoramio.

Other improvements include a stronger exterior design; the front-end in particular now wears an enlarged version of the Toyota Auris face which has helped rectify the weak road image the Verso has suffered from in the past. The overall length has also been increased by 20mm to 4,460mm although this is mainly due to bolder bumpers.

So, all good on paper, but what is this revamped Verso like to use and drive? I tried the best-selling new 109bhp 1.6-litre D-4D. Originating from the BMW Group, Toyota have modified it using a dual-mass flywheel, revised engine mountings and their own electronics for the ECU (engine brain) — and for the first time there's a start & stop function.

This four-cylinder turbodiesel engine generates 199lb ft of torque from 1,750rpm and is mated to Toyota's own six-speed manual 'box. Fuel economy for the official Combined Cycle is said to be 62.8mpg with CO2 emissions lower by 10% at 119g/km. Top speed is 115mph with zero to 62mph taking a stately 12.7 seconds. Family budgets will be helped by the road tax: Ł0 for the First Year and Ł30 thereafter.

In reality a week's test covering long and short journeys returned 47.1mpg — good but well short of the official 62.8mpg. The engine can be noisy under acceleration but was considerably quieter once cruising along and the motorway maximum speed was effortlessly maintained. The all-important mid-range response from the engine was smooth without the need for constant gearchanging to overtake slower traffic. Overall it was efficient and easy to drive, although not that entertaining or satisfying.

The changes to the suspension have provided a better balance between comfort and dynamic ability. The Verso is not the sharpest in its sector in terms of handling — that honour goes to Ford's new C-Max — and the steering feels light, with little feedback at higher speeds. That said, like the engine's performance, it will be good enough for most people buying a family or work car in the mid-sized MPV sector.

That lack of 'sparkle' also extends to the interior. Yes, it has loads of equipment and the Easy Flat seating system is convenient to use but the third row of two seats has limited leg space and access to them is restricted by the individual three seats making up the middle row even though they slide and fold.

In reality it is a nicer vehicle if used in five-seater mode rather than as a maxed-out seven seater. With all the seats in use there's just 155 litres of luggage space. This increases to 399 litres with five seats in use, and to a maximum of 1,009 litres with the second and third rows of seats both folded down.

Whilst some of the Verso's rivals offer more interior space, the driving position and all round visibility for passengers is good. The fascia panel and some of the other trim is soft-feel plastic but it looks bland and still feels low-rent, being more durable than visually appealing.

All the controls are well laid-out and the instruments are well positioned in the centre of the fascia in a cowled panel canted towards the driver. The new Touch 2 with Go touchscreen multimedia system works well enough but by today's standards the 6.1-inch screen is small.

When it comes to specification throughout the range there is no real shortfall, with even the lowest Active level having AirCon, electric front windows, daytime running lights and more.

Move up a grade and 16-inch alloy wheels and Bluetooth are just two of the items added to the Icon spec and so it goes on increasing until you get to the top level Excel version which has 17-inch alloy wheels, Toyota Touch 2 with Go, keyless entry with start button, auto wipers, automatic Bi-xenon headlights and washers, automatic headlight levelling, rear side door sunshades and leather trim for areas of the doors and seat bolsters. My test car also had a Ł550 panoramic glass sunroof.

The Toyota Verso shouldn't be overlooked by people needing a mid-sized MPV to use as a family or business wagon. It might not be the class-leader but it is an easy-to-drive and safe and sound if uninspiring offering.

Being a Toyota it should certainly prove reliable, durable and relatively cheap to run and is backed by a five-year/100,000-mile warranty. But with function favoured over fashion the Verso falls short on one important factor: desirability. — David Miles