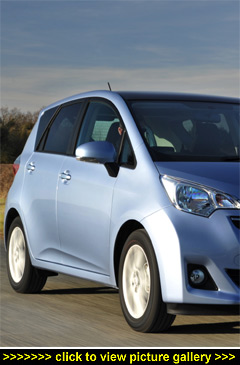 “Toyota have had a gap in their
small car range since 2005, when
the Yaris Verso was deleted from
the line-up. They have the iQ,
Aygo, Yaris and Urban Cruiser
ranges, but the missing link was
a growing-in-popularity supermini-
sized MPV. But now it’s finally
here — the new Verso-S...”

UNTIL THE NEW VERSO-S, if you wanted a Toyota MPV the default choice was the medium-sized, and much more expensive, Verso five/seven MPV. The new five-door, tall-ish hatchback Verso-S features clever seating in a neat and nimble package — and all provided in a body less than four metres long.

But perhaps more important than size is the amount it will cost. Toyota had previously published the prices for the 1.33-litre 98bhp petrol-engined Verso-S range at Ł14,645 for the TR and Ł15,745 for the best-selling T Spirit.

But interestingly, at the European press launch this week, Matt Harrison, commercial director for Toyota GB, announced that as a six-month introductory offer these prices would be lower — Ł13,995 and Ł14,995 respectively. His reason is that the offer would be a 'momentum for sales' in a difficult new car market. Whatever, a lower price is always welcome.

A seven-speed CVT Multidrive S automatic transmission is also offered and this costs an extra Ł1,150. It's also the first CVT to feature on a B-segment Toyota and, Toyota says, the first CVT to be offered on a B-MPV.

Perhaps not strictly true — a CVT automatic gearbox is also offered on the new Honda Jazz which also goes on sale from 1 March. That noted, Toyota do not class the Jazz as an MPV but rate it a supermini hatchback. Consequently they see the Verso-S rivals in this growing sector being the Citroen C3 Picasso, Nissan Note, Renault Grand Modus, Kia Venga, Vauxhall Meriva and the Hyundai ix20.

On the subject of sales, the UK will be the second largest market in Western Europe (behind Germany) for the Verso-S and Harrison estimates 3,000 registrations this year (2011) and over 3,300 in a full year. European Verso-S sales for 2011 are planned to be 25,000 units, increasing to 30,000 next year. In other European markets — where diesel is cheaper than petrol — there is an option of a 1.4-litre diesel engine but UK customers gain no benefit in terms of running costs against a higher purchase price.

Harrison added that the Verso-S will appeal to younger families and downsizers but most likely mature customers or 'empty nesters'. Advance orders in the UK confirm this, with 63 years being the average age of early adopters. 75% of 'first off the block' UK customers have ordered the top T Spirit specification and an astonishing 65% have opted for the auto CVT transmission.

Whether customers are active singles, young married couples, mid-life flat-packers or older couples, due to the rapidly climbing price of fuel, escalating motoring taxation and ever-increasing congestion on our roads, it will mean cheap to run, 'do-it-all' cars will have to be the transport of choice for many people for many years. And although Toyota GB is not specifically targeting Motability scheme sales, the less-able will also certainly consider the Verso-S as a practical solution to their transport needs.

At 3.9 metres long, the five-seat, five-door Verso-S is easy to drive, easy to park and, because of its relatively high seating and large areas of glass, easy for around-town driving and manoeuvring. Parking sensors are an extra-cost option but all models come with a rear-view camera.

Front seat headroom, good legroom for rear seat passengers and the luggage capacity of 429 litres for the T Spirit version (with its double-deck load floor) are all welcome pluses. A handy one-touch, fold-flat system for the 60:40-split rear seats, operated from within the boot, makes for easy reconfiguration of the interior when larger loads need to be carried.

The loadspace comes with a handy, lightweight 'deck board' that can be set at two different levels for added flexibility. Maximum load space with the rear seats folded is an impressive 1,388 litres. Although rear seat legroom is very good, it's a pity these seats don't slide fore and aft when needed for even more flexibility and convenience.

Overall, in terms of quality, the interior of the car is best described as functional rather than sparkling. The materials are okay and no doubt durable but the plastics look drab and feel hard. Likewise, the controls are simple but uninspiring.

That said, there's a good piece of innovation in the form of the new Toyota Touch multimedia system fitted as standard to all versions of Verso-S. It features a 6.1-inch full-colour touch-screen interface for the AM/FM radio, CD/MP3 player, trip information, rear view parking camera and Bluetooth connectivity, plus a USB port and AUX-in socket for connecting portable music players.

From May 2011 a new Ł500 Navigation Pack option joins the list of functions the system controls. As well as running comprehensive navigation tasks (such as advanced traffic coverage, speed limits and speed camera warnings), it can also be connected by Bluetooth via compatible mobile phones to Google Local Search. Using Google Maps, destinations can be input remotely from home or office and points of interest can be downloaded for entry as route destinations.

The system, designed by Toyota, can be updated with the latest functions without having to upgrade the base unit. Later this year an Apps facility will enable access to fuel prices, weather forecasts and live parking space information as well, with new Apps options rolled out via a web portal. Just hope us 'oldies' can keep up with all this technology!

'Small, spacious and smart' was the key development concept for Verso-S — and it delivers on most fronts. Despite its compact measurements it looks quite long because the wheels are positioned at each corner with short front and rear overhangs. At the front is the new generation Toyota 'face': a wide, single blade grille framed by contoured headlights and a large lower air intake. Steeply raked A-pillars give the bodyshell an aerodynamic appearance with a long roofline.

T Spirit models have a huge panoramic glass roof as standard. This starts from almost directly behind the windscreen and continues to above the rear quarter pillars. It creates a light and airy feel and, thankfully, comes with a full-length power-operated blind to keep out the very bright sunshine when needed. The glass is UV sensitive so it also minimises heat build-up in the cabin.

During my test drive in Spain on the plains south of Madrid and the hills around Toledo, the auto version recorded 42.4mpg and the manual model 40mpg. So Toyota's claim that the CVT is more fuel efficient and so CO2 cleaner looks correct. Both the manual and CVT models have a VED first year road tax rate of Ł0 but the manual model will cost Ł90 annually from the second year onwards; the CVT Ł30. Insurance is Group 8E for all versions.

And as for performance, well it's nothing to get excited about — efficient and frugal, it requires to be worked hard to cope with anything but flat roads. It will be ideal for commuting and those short trips into town.

But long journeys on motorways and going up steep hills will have you noticing that the engine is pretty vocal at 3,000rpm and above — particularly if the CVT auto option is chosen.

So, despite the lightweight construction, it just feels underpowered for the job it has to do. Officially top speed is 106mph (103mph for the CVT models) with zero to 62mph taking 13.3 seconds and 13.7 seconds respectively.

Ride quality is good and the Verso-S is a comfortable car with only the worst bumps from ridges and potholes encountered at low speeds being transmitted into the passenger compartment.

Reasons to buy include the attractive exterior styling, roomy interior, good load space and it's well equipped and cheap to run. Against? Noisy engine under load, sluggish performance with the CVT transmission and a bland interior.

While the Verso-S offers more load space with the rear seats in use, in most other respects the new Honda Jazz petrol models are livelier for performance, cheaper to buy, marginally better for fuel economy and cost the same in road tax. So customers looking to buy a roomy supermini MPV should consider their choices carefully. It's the Jazz 1.4-litre that has my vote. — David Miles