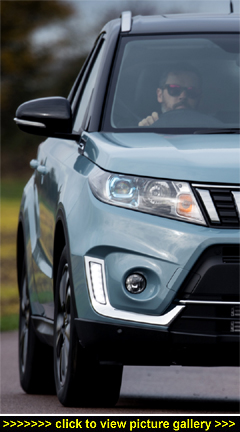 “Today’s SUV buyers need
something more than just 4x4 to
pique their interest — and that’s
a petrol engine. Which is where
Suzuki’s popular Vitara comes in,
fresh to the fray with not one
but two new petrol powerplants...”

THREE POT OR FOUR, the Vitara offers you both: a 109bhp 1.0-litre triple and a 138bhp 1.4-litre four. For the record, none of the previous engines have been carried over into the 2019-year facelifted models and the diesel engines have been banished from the line-up.

But, as the King in Alice in Wonderland said: begin at the beginning. With the Vitara that would be the looks. And they're a well-judged blend of chic and cheeky, exuding that polished self-confidence of a Range Rover Evoque. At the front the Vitara uses a clamshell bonnet, LED projector lights and a vertically chrome-barred grille to great effect; character sculpting on the doors flows into purposeful rear shoulders with distinctive stand-proud LED combination lamps, all smartly topped by a clean-cut, black-roofed glasshouse.

But smart looks don't alone a SUV make — four-wheel drive still counts for a lot too. And in the Vitara's case, it's there for the asking; optional with both engines. Better yet, you can also specify it with an automatic gearbox in the top-of-the-range 1.4 SZ5.

The new-for-2019 look continues inside — there's plenty of room in the five-seater cabin and first impressions are good with a well-judged mix of sporty and swish, boosted by some appealing metallic trim and soft material touchpoints. It's also a welcomingly airy interior courtesy of the genuinely panoramic powered sunroof (one of the largest in the class) that extends over the front and rear seats and lets you feel Mr Sun's warmth on your face with no buffeting; shut, there's a powered opaque sunblind.

The front seats are set high and upholstered in a tactile suede with firm bolstering; they also provide strong lumbar and shoulder support and hat-wearers can keep theirs on. Both seats are height adjustable, and the seatbelts too. The view over the bonnet is perfect (as too is it through the back screen) while the sporty three-spoke multifunction wheel's leather-wrapped rim fits satisfyingly in your palms. Placing and parking is a doddle, thanks to the generous-sized windows, rearview camera and front and rear parking sensors.

Ratcheting up the ambiance is an efficient climate control system as well as a pair of stylish pin-sharp dials either side of a multi-mode colour driver's display — this shows a range of information including the posted speed limit and a digital speed readout. Remote controls for phone, voice, media, cruise, and speed limiter are to be found on the steering wheel.

Comms are accessed via the seven-inch infotainment touchscreen set in the heart of the fascia with smartphone linkage via Android Auto, MirrorLink, or Apple CarPlay that also facilitates receiving directions for optimised traffic conditions, listening to music, accessing email, text messaging, etc. The navigation is crystal clear (both visually and commands-wise) with 3D mapping plus there's an audio system, DAB digital radio, and Bluetooth connectivity with USB.

You certainly don't go short on kit in the SZ5 — along with all the other items mentioned elsewhere in this review there is keyless entry with a Start button, tinted and privacy glass, powerfolding heated door mirrors, electric windows (the driver's is one-shot), auto lights and wipes, adaptive cruise control with speed limiter, aluminium pedal set, hill hold, tyre pressure monitoring, LED projector headlamps with automatic headlamp levelling, LED daytime running lights, seven airbags (including one for the driver's knee), roof rails, and 17-inch gloss black and machine-faced alloy wheels. The Vitara also comes with a five-star EuroNCAP safety rating.

Also making it easy to live with are the numerous practical storage solutions including deep bottle-holding door bins (all four doors), several open cubbies, separate dual-use cupholders, a generous storage box under the sliding armrest between the front seats, a lit glovebox, and a drop-down glasses case.

Within its socially-acceptable 4.1-metre footprint the Vitara has room for five and the back cabin offers more space than you can shake a stick at; there's loads of foot room, good knee room and the backrests are set at relaxing angles — even three can sit amicably side by side. Wide opening doors — they open to a full ninety degrees — make it easy for grown-ups as well as slotting small ones into child seats. For your refreshment, bottles can be carried in the door bins, helping to make the Vitara's airy rear cabin a particularly pleasant place in which to travel.

The turboed 1.4 Boosterjet unit delivers substantially more power and a wider torque band that's an impressive 41 percent more than the outgoing 1.6-litre engine. With 138bhp and 162lb ft on call between 1,500 and 4,000rpm, extracting get-up-and-go via your right foot is satisfyingly easy and makes upping a canter to a gallop a pleasantly smooth affair — the 1.4 feels as lively pulling up steep hills as it does accelerating from low-down, while at the top end you'll find 124mph waiting for you.

While two-pedal fans will appreciate its smooth-changing autobox, steering wheel paddle-shifters set close to the driver's fingertips offer slick manual changes either short-term, for a timely overtake, or for longer if the selector lever is flicked into its Manual groove.

And for when pressing on with real verve is what you need then the Sport mode, which also makes maximal use of the four-wheel drive, really wakes up the 1.4-litre. You'll find Sport close to the selector lever; it's one of the four settings on the foolproof push/twist AllGrip controller that also offers Auto (2WD but switching to 4WD whenever necessary), Snow, and all-wheel drive Lock for extricating the Vitara from snow, mud, or sand.

More good news: cruising at the UK's legal limit is refined and fuel-efficient — even the Combined Cycle official figure comes in at 44.8mpg. Given that our week's hard driving saw 42.3mpg, matching the official number should be easy.

The all-wheel drive also ups the Vitara's game on-road; the extra traction helps to keep the nose on track through bends and is particularly supportive when pushing-on through the twisties. The steering is nicely progressive, turn-in is sharp and body lean well managed, and along with great visibility and compact dimensions, makes the Vitara both wieldy and easily placed.

And, come winter, there's nothing more reassuring than having traction at each corner (just twist the AllGrip control knob to Snow). Did we mention the braking? Well, with discs all round, vented at the front, it's strong and drama free, exactly as you'd want it to be.

Also good to know is that even in everyday road traffic there's plenty of safety and 'assists' looking out for you — Lane Departure Warning and Prevention not only warns you at speeds above 37mph if you depart your lane without indicating but, if you do, it will also apply an automatic input to the steering to ensure the car remains in its correct direction of travel.

Lane changing at speeds above 10mph is now even safer with the addition of Blind Spot Monitor. If you indicate to change lanes and this spots a vehicle approaching in the rear blind spot on either side of the vehicle, it warns you in time to react.

Rear Cross Traffic Alert is another must-have. At speeds of up to 5mph when reversing out of car parking spaces, this warns of vehicles approaching from either side. It will save your bodywork (and pride) in all manner of parking situations.

Naturally there's also an electronic stability programme as well as Dual Sensor Brake Support — this advanced forward detection system supplies a collision warning with automatic braking. From approximately 3mph to 62mph, if the system determines a risk of collision with an obstacle ahead it issues both audio and visual warnings. If there's a high risk of a collision and the driver panic brakes, the system deploys Brake Assist, increasing braking force. And when the risk of a collision is more urgent, the system applies full automatic braking in an effort to avoid the collision or reduce damage.

The Vitara's ride is compliant and comfortable — even in Sin City the suspension smoothes out speed humps, broken blacktop and potholes with minimal fuss. It helps too that the alloys aren't skinned in go-faster lo-pro rubber but 'proper' 215/55 'comfort'-profile tyres that contribute to the ride and much as to the grip.

Lift the tailgate and you'll find a deep and well thought-out 375-litre boot with a two-level floor that, in its top position, sits flush with a lip-free load sill and the folded 60:40-split rear backrests when they're parked for cargo duty. The floor panel-cum-luggage board can also be used to divide up the boot area or simply removed to make good use of the lower underfloor section.

Outer boot 'pockets' have removable sides for accommodating wider loads, bag hooks are provided, and the lightweight rear parcel shelf-cum-luggage cover can be quickly removed and stowed. For those occasions when the boot alone is not enough, dropping the rear seatbacks opens it up to a 710-litre loadbay with a seamless floor. Alternately, you can tow a braked 1,200kg.

Say hello to a good buy! Drive a Vitara for even a short trip and it will come as no surprise that Suzuki's handsome compact SUV enjoys a strong following — the new Boosterjet petrol engines and Ł17K-Ł25K pricing make it an attractive choice, and despite all the 2019-year upgrades it's still less expensive than most of its classmates. ~ MotorBar