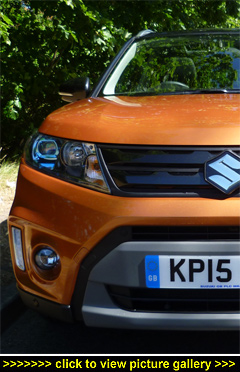 “Suzuki, the brand, just keeps
getting better and better. As does
its Vitara, the latest generation
version of which has just arrived
in UK showrooms...”

UNLIKE THE GRAND VITARA IT REPLACES — which could be had with either three or five doors, Suzuki's distinctive all-new Vitara 4WD crossover comes with a full set of five doors. So if you've been thinking about getting the likes of Nissan's market-leading Juke (the Vitara is usefully bigger but still a wieldy size), the new Captur from Renault or Vauxhall's Mokka, then be sure to make room on your list for the new Vitara.

Looks-wise it evokes the charisma of some rather more expensive SUVs and crossovers. And it's proud of its looks — which is why the Vitara flaunts some stand-out-from-the-crowd paint finishes including five two-tone combinations and the eye-catching Horizon Orange metallic (with Cosmic Black Pearl metallic glasshouse) of our test car. Not a colour many cars can wear with panache — but the Vitara carries it off with style.

Various option packages can also be specified to personalise the interior and exterior including a black or white front grille and the instrument panel trim which is available in turquoise, orange, white, or piano black).

It's not all show though because underpinning the Vitara is Suzuki's track record of producing 4x4 models. And while not a hardcore off-roader this new Vitara will nonetheless tackle off-the-grid tracks and trails as well as any adverse weather head-on: 185mm ground clearance, wheelarch protecting extensions and sturdy off-roading skid plates give it the go-anywhere look — a look that's backed up by Suzuki's Allgrip four-wheel drive system.

But Engines before grip… Beneath the clamshell style bonnet of our test Vitara was a 1.6-litre petrol engine (should you prefer, a 1.6 diesel is the alternative) that pushes out 118bhp and 115lb ft of torque. Sufficient to take it to 112mph and get it to the benchmark 62mph in exactly 12 seconds from standstill.

These days buyers want all-wheel drive for the seasonal white sprinkling and economy the rest of the year. Usually you'd need to ask Santa about that but the Vitara obliges out of the box: economy is officially 50.4mpg in the combined cycle (43.4 urban and 55.4 extra urban). CO2 emissions are 130g/km which incurs an annual road tax bill of Ł110 from the second year on (thanks to its 130g/km you won't be called upon to pay any road tax for the first year).

A full week of no-quarter driving on fast moving motorways as well as in snarled up town traffic saw an overall average of 40.1mpg. We'd expect most Vitara owners to better our figures.

The four-pot, unleaded-drinking, free-revving powerplant is a willing unit and satisfyingly flexible in the cut and thrust of city traffic. Incidentally, it also costs Ł1,500 less to buy than the diesel and while we found its clean-changing five-speed 'stick' shift perfectly fine (you don't miss a sixth forward gear; and pick-up in top is strong on motorways) there's also a six-speed auto (with paddle-shifters) which can be relied upon to take every last drop of hassle out of driving in heavy traffic.

The Vitara's on-demand all-wheel drive system offers four driver-selectable modes for beating the tricky stuff: Auto, Sport, Snow and Lock. Better still, it's foolproof to use and can be trusted to look after things for you in its Auto setting, which uses two-wheel drive unless it really needs grip at every corner, in which case it applies it.

The Sport setting maximises engine performance to give you maximum grip and sporty dynamics — and you really can feel the difference pressing on along twisty roads and cornering (naturally you'll use a bit more fuel if you leave keep it 'sported-up' permanently).

The other two settings are Snow, which gives you maximum tenacity and stability not just in wintry conditions but on all slippery surfaces, flooded roads, etc. Last but definitely not least is Lock which, in conjunction with a limited slip diff, provides the utmost traction to get you through — or even out of — sand, snow or mud.

Importantly, approach (18.2 degree) and departure (28.2 degree) angles are designed to help negotiate deeply-rutted or snow-covered roads as well as to keep you moving over obstacles and uneven ground off-road.

A valuable feature of the Allgrip system is that it also provides 'feed forward'. Most conventional full-time 4x4 systems allocate 'drive' to the rear wheels after detecting slippage at their front wheels; the Vitara does that too, but it also cleverly anticipates loss of grip at the front before it's lost so it can send balancing drive rearwards in time to counter grip loss so providing greater stability at all times.

Other practical driver aids include Hill Hold for easy pull-aways on slopes and Hill Descent Control which automatically feeds in wheel braking if you're travelling steeply downhill and engine braking alone is not enough to slow you.

Given its crossover looks the Vitara's ride is more compliant than you may be expecting; noticeably so in the urban (but often not so urbane) jungle. Humps, bumps and shoddy blacktop are managed well while motorways are handled with an easy mile-covering gait and it feels as though it will lope smoothly along at the legal limit all day long.

Despite its high ground clearance (185mm) and high-ridin' bodyshell, body lean during cornering is well controlled and doesn't compromise the nimble handling, itself predictably directed through the leather-rimmed helm. Not only does its compact footprint benefit handling but parking and in-town manoeuvring are a doddle even if you never used the standard-fit reversing camera and front and rear parking sensors (which you will).

'Safe as houses', goes the saying. Travelling in the SZ5 you have that very same feeling; of being out of harm's way — it's not just down to the Vitara's reassuring road manners but also the safety systems that, in addition to all-wheel drive and ESP, include seven airbags (with one for the driver's knee), adaptive cruise control, tyre pressure monitoring, and Radar Brake Support which monitors the road ahead to check for any risk of a collision with the vehicle in front — if so, it warns the driver (both visually and aurally).

If its warnings are ignored and a collision in unavoidable, the system applies the brakes automatically. Better still, it works at high speeds, in darkness, and in rain and other bad weather. Plus a Far or Near distance warning can be selected via a button on the dash.

Billed as 'compact', the 4,175mm-long Vitara is nevertheless one of the roomiest crossovers to buy, easily seating five adults. The cabin is light and airy thanks to a massive one-shot-op panoramic sunroof consisting of two individually sliding glass panels — it's one of the largest openings in the class, extending over the front and rear seats for an amazing 560mm-long view of the sky. If you're not in the mood for the full rays treatment there's a power mesh blind — or you could just don your shades (stored in a drop-down roof holder).

As well as invitingly airy the cabin is spacious and smartly fitted-out. Settle comfortably in one of the leather-and-suede front seats and you'll find footwells big enough for boot-wearing drivers and headroom aplenty along with decent bolstering and effective shoulder and under-knee support. The driver (and passengers!) also enjoy uninterrupted views out to the front, side and even rearwards courtesy of the elevated driving position and big windows.

The infotainment is controlled via a seven-inch touchscreen set in the centre of the fascia panel (on our test car finished in orange to match the external paintwork) — and you can even operate it wearing gloves! 3D mapping also shows easily-identified landmarks, plus smartphone apps can be run through the infotainment system. Other nice touches included the multifunction wheel (voice, phone, media, cruise, speed limiter) that keeps puts control of just about everything at your fingertips.

Access to the rear cabin is especially easy thanks to the wide-opening back doors combined with real-world-sized openings that mean you don't have to mind your head despite the gently rearward sloping roof — and the fact that the seat base is exactly the right height above the road to do the classic 'sit and swivel' getting in or out.

Once there, passengers will find loads of foot and knee room as well as backrests set at a relaxing angle. As in the front, seating is high so views out are good. The three seatbelts and three headrests aren't just for show — three adults can travel side by side and keep smiling.

Boot space with four or five on board is 375 litres — more than enough for everyday shopping and weekenders. For more serious load-lugging you can fold the 60:40-split rear seatbacks to transform the boot into a 710-litre cargo bay, easily accessed through the wide light-to-lift tailgate.

A double-height boot floor offers additional out-of-sight storage as well as the option of accommodating taller than normal load items. The Vitara will tow, too — a braked 1,200kg. And, of course, there are bag hooks…

With an entry-level price that's very nice (three grades starting from just Ł13,999) the new Vitaras offer a lot for the money including stand out from the crowd looks. They're also exceedingly well-specced, an easy steer, and handle people or packages with equal ease. We could say 'what's not to like'; and we'd be right! — MotorBar