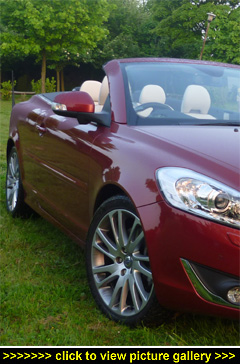 “In the film Mr Deeds, small-town
nice-guy Longfellow Deeds (Adam
Sandler) inherits billions and
buys a red Corvette convertible
for everyone in his home town.
But after a week behind the wheel
of Volvo’s stylish convertible it
will be C70s all round if I ever find
myself in the same position as
Longfellow Deeds...”

IF YOU'RE AFTER A CONVERTIBLE that's comfortable, refined and as safe as it's stylish, the C70 is a good place to begin — and end! — your search. Not only is it probably the safest convertible you can buy, it comes with a fully automatic retractable metal hardtop.

And when it comes to what's above your head, metal trumps cloth every time. But it's not just the protection, security and refinement a metal hardtop provides that's the key to the C70's appeal, it's the manner of travel this genuine four-seater cabriolet serves up when you're driving topless.

Dismissing the roof couldn't be any easier or any less demanding — simply press and hold the 'open' button to the right of the swan-neck traditional handbrake while the two-piece top folds itself away into the upper section of the boot. Make a note to watch its intriguing ballet from the outside sometime — it's almost as entertaining as watching Concorde take off.

For the record, the folding roof only needs a spare 0.2 metres of clearance behind the rear bumper during lowering or raising, so no worries about dropping your top in today's tight car parks.

The C70 is notable for its laid-back Scandinavian design — roof up or down, this is one smart looking car. The cabin, built with high quality materials and equally high attention to detail, is defined by a minimalist look that in recent years has become a Volvo trademark.

Easily topping the lengthy list of plus points are the plush, wonderfully cosseting front seats — definitely some of the most comfortable in any car, regardless of the size of your budget.

The power-adjustable driving position is first class with no compromises necessary on the part of the driver — and both front seat occupants will be cosseted by first-rate two-stage heated seats, adjustable lumbar support and individual 'own side' heating and cooling.

As you'd expect at this level, the driver's seat has a three-setting memory. The footrest for the driver's 'clutch foot' is a good size and there's plenty of room for shins and knees. Visibility is very good thanks to long side windows and even the hardtop's rear screen doesn't restrict the driver's view of what's coming up or going on behind.

All major switchgear is easily to hand on the elegant 'floating' panel that forms the centre stack supplemented by steering wheel-mounted controls for cruise, audio and 'phone. Starting (as well as locking/unlocking) is conveniently keyless — just turn the switch on the fascia to the left of the meaty leather-wrapped steering wheel.

SatNav is present and correct with 3D graphics displayed sharply on a neat screen that glides up from out of the fascia top when required — you use a remote to operate the system, but it's not a problem and it all works fine once guidance begins. And everything you touch in the cabin — from controls to the soft leather upholstery — has a satisfying quality feel to it.

Naturally the doors lock automatically as you pull away and all four windows have one-shot operation, plus the powerfold mirrors park on demand as well as automatically when locking and leaving.

The cabin is an easy place to squirrel away all the unavoidable 'stuff' that goes with a using a car: you'll find especially handy pouch pockets along the leading edges of both front seats, accommodating (and well concealed) lidded bins in the doors, a useful tray behind the centre stack, a two-tier storage box capped by the centre front armrest and twin cupholders in another bin with a sliding lid between the front seats.

Reaching the two individual back seats is easy; the front backrest folds and then glides forward under power making entry and exit both hassle-free even with the hardtop in place. And when Volvo says 'four-seater' it really does mean 'four' and not 2+2 — in other words, there's easily enough room in the back of the C70 for two adults along with two adults up front. And all sitting pretty. In fact, you'd be hard-pressed to find more accommodating rear seats (and space) in any other cabriolet or hardtop convertible.

Storing a folding metal roof the size of the C70's and still providing usable space for luggage calls for some clever thinking. Thankfully, Volvo has managed the trick convincingly — with the top up, the boot offers a practical 404 litres; with it neatly folded away in the upper section of the boot you still have a serviceable 200 litres.

A neat twist is the Load Assist function: press the button in the boot and the stacked roof lifts up electrically for easier access to any luggage beneath. There's also a load-through hatch for carrying longer items — skiing, anybody?

On the road that makes for fair punch of power — 62mph from standstill comes up in 9.9 seconds on the way to a maximum speed of 134mph. An ample sufficiency, as they say; while the turbodiesel stays unruffled and fluid in and around town, it ramps up its responses when you squeeze harder on the accelerator or need to overtake.

Ultimately though, the C70 is designed for comfort and refinement rather than burning rubber — and that's exactly what most people want from a premium drop-top. And with the metal roof up, the cabin is as quiet as a church on Monday.

The turboed D4 is mated to Volvo's six-speed Geartonic automatic transmission. It's a good match — the auto shifts crisply and it also incorporates a manual override for those times when you want even more control or want to hold a gear through a demanding series of B-road bends.

On motorways, the D4-powered C70 proves to be a nonchalant mile-eating cruiser — in the UK you'll only need 2,000rpm to waft along at the legal limit.

Handling-wise the C70 goes with the flow in a predictable front-wheel drive way. And that's a good thing — it's a pleasure to drive. The powered rack-and-pinion steering only calls for a light touch but it's not so light that pressing on a bit along winding secondary roads ever becomes hard work. A set of 18-inch wheels do their part visually as well as making the C70 feel planted and together at speed.

The ride, too, is composed. What you won't get, thankfully (and impressively, given the size of the open cabin) is any scuttle shake — something that you will find on some other large cabrios. Braking is fine; discs at every corner do their job with typical Volvo efficiency and there's reassuring progression from the pedal.

Open-air driving is what this C70 is all about. The cabin is remarkably peaceful roof-down, helped by the extent the windscreen extends back. Even with just the front windows up, the breeze is well-controlled; with all four raised four adults can enjoy 'wind in their hair' motoring — or not, as is the case in the C70, which is even better!

And if just the front seats are in use and the wind-blocker in place, top-down cruising is serenely free from buffeting and thoroughly enjoyable even at motorway speeds. And it's all made even better in hot weather by the very efficient climate control air-conditioning; in the colder months the heater-heated seats combo is equally brilliant.

Reassuring too are all the safety features including a roll-over protection system (two roll hoops hidden behind the rear seats that deploy, roof up or down, should there be any risk of a roll-over. Plus full stability control is standard as too is a full complement of airbags along with other useful dual-purpose (safety & convenience) kit such as Volvo's blind spot warning system, parking sensors front and rear, cruise control and active Bi-Xenon headlights that follow the movement of the steering wheel.

The C70 is arguably Volvo's most stylish and desirable model. Its USP is its genuine all-year-round driveability (for four adults) — get the roof down on a crisp autumnal day, turn on the heated seats and dial up 'hot' on the climate control and even a trip to the supermarket takes on an indulgent flavour because in a C70 journeys beat arrivals every trip. Over the course of a week of mixed driving we averaged 39.4mpg which, along with those super-cosseting seats, only adds to the appeal. — MotorBar