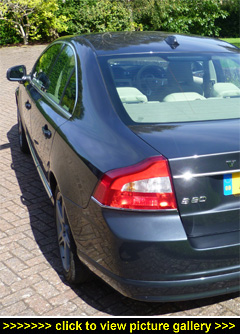 “Volvo’s S80 now comes with the
heart of a lion — it has to be because
although it’s only a 1.6 turbodiesel,
it delivers the real-world performance
you need while sipping diesel at the
rate of 60+mpg...”

JUST TEN YEARS AGO few motorists would have ever dreamed of buying a large executive saloon with a mere four-cylinder 1.6-litre engine. And fewer still would have considered such a pairing 'right and proper' for a large, luxuriously-appointed saloon. What a difference a decade makes!

While it's large, the S8 is not too big for our UK roads and has more than enough presence not to be overlooked in the executive car park or, for that matter, anywhere else. Long and wide with a broad stance, it's fronted by the unmistakable Volvo icon on the chrome grille.

Not many people know this but... Volvo's badge — a circle with an arrow pointing diagonally upwards to the right — originally stood for the Roman god of war, Mars, and the masculine gender. By association, the symbol also came to represent the metal from which most weapons were made at the time: iron. When Volvo was first formed, the 'iron' badge was chosen for its linkage to the honoured traditions of the Swedish iron industry: steel and strength, with properties such as safety, quality and durability.

The S80 is all of those things. It's also good-looking: a pronounced and distinctive shoulder line runs from the nose all the way along the flanks to merge fluently with the squared-off boot lid. Tasteful brightwork underscores the clean elegance of the four-door bodyshape, and smart forged aluminium 18-inch wheels with five elegantly-slim twin-spokes finished in light grey add a final modish touch to the well-groomed S80.

Bearing in mind that the S80 saloon is a stand-alone competitive alternative choice for motorists who prefer Scandinavian charm to German blitzkrieg, fitting the 1.6-litre unit was a brave step to take. The first big surprise is that it doesn't feel underpowered; and after driving hundreds of miles on all types of roads in a D2, there's no denying that this combination works. Convincingly.

And if, ten years ago, you'd told people a two-tonne car, powered by a mere 1.6-litres, would return around 60mpg, you'd have been laughed out of your local. But who's laughing now: officially, this large saloon will do 62.8mpg on the combined cycle. A week in the hands of MotorBar's test team didn't quite match that — our overall average came out at 47.4mpg but over 50mpg was readily available whenever you reined-in the road speed.

Easier said than done — if it was up to this smooth 1,560cc powerplant, it would spend its life loping along the motorways at considerably more than the legal limit. It's not the 113bhp but the wide spread of torque: 199lb ft that peaks between 1,750 and 2,500rpm — just where it's the most effective and best matched to the Powershift auto 'box's six ratios.

But it's not just the quality of the power delivery that makes this 'little and large' S80 such a relaxing car to travel in. Its major pull is the soothing ambience of its cabin. And, even more of a magnet, its wonderful seats. Alongside its state-of-the-art safety, Volvo is also well-known for the comfort of its seating that fits your body as ergonomically as a glove.

Let's be honest — if you must travel by car on today's frenetic roads, where some average speeds can actually be lower than they were back in the days of horse-drawn carriages, then you may as well do it in comfort. Real comfort. Admit it: if you were flying and someone offered you a first class seat at no premium, you'd bite off their hand!

And first class is how you'll travel if you 'fly' Volvo. Keyless 'entry, go and locking' makes for easy entry into the S80's cabin, where four adults can travel totally at ease in the amazingly comfortable and supportive seats; those in the front enjoy loads of room all around them, including generous headroom.

Five is do-able so long as the outer seat occupants are willing to give up 'their' padded central armrest (not likely!). Styling and attention to detail is first rate and marked out by the slim and shapely centre stack, sleekly modern dash, and harmonious upscale materials including soft hide upholstery and matt silk aluminium highlights and filleting. All very Swedish, in fact.

S80 drivers should be forgiven for feeling rather smug because they really do get a self-indulgent deal: the driving position is spot-on (an 8-way power adjustable and quick-acting 3-stage heated driver's seat helps, as too does the fully-adjustable, multifunction, leather-wrapped, four-spoke steering wheel), logical and legible instrumentation and intuitive switchgear.

Other desirable convenience and control features include an auto-dimming rear-view mirror, on-demand (and automatically on locking) powerfold door mirrors, one-shot auto up/down windows (all four), voice recognition SatNav with 7-inch colour screen integrated into the upper fascia; and, in the rev-counter, a driver's information display showing a variety of important information from range to empty, the status of safety systems (such as lane departure warning), and road traffic signs, etc. The driver can also store three individual seat and door mirror settings.

Visibility is fine; and, courtesy of the accurate rear parking sensors and audio-visual display, so is reversing. A nice touch is the powered rear headrests — for better rearward visibility, if you have no back seat passengers, press a button on the centre stack and they drop forward totally out of the driver's sight-line. Placing the S80 on the road is a breeze.

It's also an easy car to keep tidy, with plenty of neat storage solutions, door pockets that hold bottles, large siamesed cup-holders, and useful soft pouch-pockets along the front of both front seats. There's also a regular Volvo feature: the lid of the front armrest/cubby flips open 180 degrees to provide a 'tray' for rear seat passengers.

Back-seat passengers get the first class treatment as well with plenty of leg and knee room. There's enough headroom for an average-sized adult sitting up straight but most passengers will lean back and let the restful backrest angle do the rest. Personal air vents are provided in the B-pillars.

As in the front, the rear seats are set well above the floor to provide good comfort for your knees and lower legs on long journeys, which only emphasise the genuine comfort of the S80's seating. Likewise, although quiet and relaxing on short shopping or commuting runs, with negligible road and wind noise it's the high-speed long-haul flights that turn out to be truly peaceful in these big Swedish saloons.

Four adults usually means four sets of luggage. The wide boot can swallow 480 litres; and that's perfectly ample. The boot lid opens high and if you do need more room and the back cabin is unoccupied, the 60:40 split rear seatbacks fold down almost flat for transporting larger and longer (upto 75") items. It's versatile up to a point but it is a saloon so don't expect to fit a washing machine in there (buy the V70 instead). There's also a load-through hatch behind the centre armrest and a space-saver spare is carried under the lift-up boot floor.

Wherever you're sitting in an S80 you'll benefit from the standard equipment, whether it's the quality 8-speaker hi-fi, the very efficient climate control, the softly cushioning leather or even the hands-free Bluetooth phone connection that also allows music streaming from a preferred Bluetooth-enabled portable music player — and, of course, all the reassuring safety.

Under the skin of any S80 there's a host of state-of-the-art technology — all designed to protect you from near misses and other drivers' mistakes, and to keep you safe in all sorts of life-threatening motoring scenarios.

Along with a comprehensive set of airbags and anti-whiplash front head restraints (Volvo's system is one of the most effective on the market), the S80 is also equipped with BLIS (Blind Spot Information System) and IDIS (Intelligent Driver Information System).

BLIS detects if another vehicle is in either side's rear blind spot alongside the car and alerts the driver via a visual signal. IDIS holds back non-essential information in pressing situations; for instance, by delaying incoming phone calls or text messages when steering through bends.

The S80's standard-fit City Safety system is another very useful driver's aide. If the driver fails to react in time when the vehicle in front slows down or stops, or if he or she is driving too fast towards a stationary object, City Safety automatically brakes the car. The system is active between 2 and 31mph.

Lane Departure Warning is another 'always alert' companion that's welcome, for example, on long, boring motorway journeys. It alerts the driver if the car crosses one of the road markings without an obvious reason, such as use of the indicator.

Nobody really likes driving at night: today's roads are like minefields, pitted with deep wheel-buckling potholes or debris ranging from tyre-slitting bottles to broken exhausts. Active Bending Lights provide the best possible visibility during the hours of darkness, the swivelling headlight beams following the sweeps and bends of the road as the steering wheel is being turned.

Other driver support systems include Road Sign Information (road signs displayed in the instrument cluster), Active High Beam technology (automatic switching between high and low beam at just the right moment to give you maximum vision as long as possible before dazzling oncoming traffic), and Tunnel Detection (automatically turns on the headlights when the car enters a tunnel).

Adaptive Cruise Control (ACC) is another ever-vigilant 'assistant' that continuously monitors the gap to the vehicle in front while 'in the cruise' and automatically adjusts your speed to ensure that this gap doesn't shrink too much. And there are more, but too many to mention here.

One of the team remarked that with all these 'sixth sense' safety systems you can 'Drive like a Jedi'. Actually, it's not so far from the truth — just don't forget that they're still back-up. You're the one flying the ship.

Undeniably cosseting of its driver and passengers, the S80 makes a relaxed long-distance cruiser that offers near-limousine comfort. But can it get you to the church on time? Actually, its well-mannered, limousine-like ride doesn't mean you can't put the pedal to the metal.

Obviously the 1.6-litre under the bonnet doesn't make for accelerative fireworks but don't forget that the same body can also be specified with more potent engines — all the way up to 299bhp. And it handles that okay.

So while it may not be as hard-nosed as some of its more sports-orientated German rivals — and in this D2 guise it simply doesn't need to be — the S80 certainly grips (the 245/40 Pirelli P Zero tyres help) and can be slung around in quite a cavalier manner, pulling through bends with minimal body lean.

And as you'd expect when pressing on in a front-wheel drive car, some understeer creeps in when you pass the fifties in the twisties. For times like this the Powershift's Sport and manual gearchange modes are just the job.

A decent set of brakes with good feel and progressive unrelenting bite are as good as expected; plus there's also engine braking on hand in Sport and Manual. And working unobtrusively behind the scenes to keep it all tidy is a stability and traction control system. So Yes, the D2 will get you to the church, or anywhere else you wish to go, on time.

Very few large saloons give you the blend of sumptuous comfort, economy and safety that this 1.6-litre S80 does. Add in competitive pricing and low running costs and the handsome D2 is a highly satisfying premium saloon to travel in, and to drive. — MotorBar