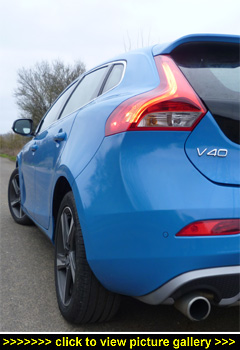 “Worried about the end of the world?
Don’t be; you’re more likely to die in
a road traffic accident. So instead of
using your life’s savings to build a
nuclear bunker at the bottom of your
garden, spend the money instead on
a Volvo V40...”

WHY A VOLVO V40? Well, judged by its Euro NCAP score, it's the safest car you can buy — at any price. And it's a damn sight more fun than living underground for twenty years until it's safe — maybe! — to come out again.

Replacing the S40 saloon and V50 estate ranges in one determined stroke, the 'compact premium' V40's true mission is to headhunt customers who are in the market for a similarly sized Audi (A3 Sportback), BMW (1 Series), Mercedes or even VW (Golf).

The sleek, hunkered-down look hides the fact that the five-door hatchback V40 occupies a tad more road space than both the 1 Series and A3 Sportback. It helps that there's a dash of coupe incorporated in the V40's design, accentuated by the steeply-rising waistline as it heads south on its way past narrowing side windows to the distinctive boomerang-shaped tail lights.

Tasty without being in your face; that's the V40. But does that make it the smartest Volvo to come out of Gothenburg? Many think so — and our bright blue test car certainly drew plenty of admiring looks and 'thumbs up' from other drivers.

Of course, it helps if you're driving one of the the R-Design models. Finished in a vivid blue paint (Rebel Blue) its got more than a touch of attitude: thrusting nose treatment at the front; two large protruding tailpipes (one at each corner) at the rear; and, in between, matt black diamond-cut five-arm 18-inch alloy wheels.

Much like Audi's S line trim, R-Design doesn't, of itself, make the V40 any faster. But you can, for a few pounds more, specify a sports suspension with a lowered ride height (by 10mm). Do so and you'll get even less cornering body lean and, surprisingly, even rolling on 18-inch rims, the ride comfort is not compromised — clearly the V40 is a family car that's got its priorities right.

Slip inside and its unmistakably Volvo — great seats (big, well bolstered and leather-upholstered and enhanced by black suede centre panels and branded 'R-Design') and oodles of Swedish character. This a Volvo so, naturally, you'll find one of their trademark slimline 'floating' centre stacks. The cabin looks and, crucially, feels upmarket.

Five doors doesn't automatically guarantee maximum comfort for four adults — but in the V40 it does. And if you're used to Audi and BMW quality, you won't be disappointed when you sit in the V40's airy and minimalist cabin, tastefully trimmed with satin-chrome detailing.

Modish touches include a 'glowing' gear knob cleverly lit by a dedicated overhead LED, and the frameless rear-view mirror that could have been designed by Apple.

In addition to the expected navigation and multimedia features, you can run an app which lets your communicate with your V40 via your mobile to, for instance, show you on a map precisely where you parked your car, then lead you to it (just follow the arrow!). It also allows you to do a bunch of other nifty stuff, like remotely lock or unlock it, or find out how much fuel's left in the tank! It will even alert you if your car's about to be stolen…

The V40's excellent liquid crystal digital instrument set mimics a traditional analogue set-up but can, at the click on the left-hand column stalk, be displayed in any one of three modes: Performance (the virtual speedometer becomes a red-shaded rev-counter with a digital speed display alongside a power-use meter); Elegance (the 'normal' setting); or Eco with economy-aiding displays. Oh, and the legibility of all the cool graphics is first rate, even on bright sunshiney days.

A smart (and safe) touch for the speedo is that your current speed is highlighted to make it easier to check in the briefest of glances away from the road when you're driving — for example, when you're travelling at, say, 60mph, the 50-70mph sector will be noticeably brighter than the rest of the markings, playing on your eyes' natural instinct to go to the clearest spot. Another great feature is the road sign speed limit recognition that displays the posted speed limits.

The shapely R-Design multifunction (voice, audio, speed limiter, cruise) leather-bound steering wheel, like the nicely contoured gear knob, feels good in your hands. As you physically relax back into the supportive chair you'll also appreciate the good all-round visibility — although you do need the standard-fit rear parking sensors!

Packed to the gunnels with safety kit, the V40 is, officially, the safest vehicle ever tested by Euro NCAP. It also comes with a pro-active crash avoidance system and a pedestrian airbag and cushioned bonnet — and that's in addition to its full-house of driver and passenger airbags, whiplash protection and pre-crash preparation systems.

You can also have self parking, automatic headlamp dipping, a higher-speed collision warning with full auto braking (in case the driver fails to respond) — the standard City Safety feature is good for speeds up to 31mph. Also available are electronic 'guardians' covering blindspot monitoring, lane departure warning, pedestrian detection, and even driver alertness.

Hatchback it may be, but the V40 offers ample practicality whether you're a premium-loving single or a family. For a start the rear passenger compartment is as welcoming and as commendably comfortable as the front, with excellent views out for both outer rear passengers.

Along with satisfactory space for elbows and shoulders, there's also satisfactory room for knees, legs and feet. Give up the wide, padded central armrest and a fifth can join the party — preferably a youngster although an adult can be accommodated. Statistically, few modern cars carry more than a driver and single passenger; even less carry four, so the fifth rarely gets used anyway.

The boot is a usable 335 litres, with a narrower opening than you might expect from a Volvo — that noted, it certainly didn't cramp some house-moving runs we needed to make. More good news: the 60:40 split rear seatbacks fold down virtually flat to create a practical 1,032-litre loadbay.

Adding extra versatility is a two-level boot floor — if you're planning on doing some regular load carrying you might want to tick the options box for a luggage rail system to keep everything in its rightful place. The lightweight rear parcel shelf-cum luggage cover is easy to remove and stow. Glad, too, to see a real spare wheel (okay, so it's a space saver) that covers you for all tyre damage scenarios.

Power can be anything from a four-pot petrol to a five-cylinder diesel. The 1.6-litre T4 under the bonnet of our test car pumped out 177bhp, backed up by 177lb ft of torque on call from 1,600 to 5,000rpm. It's smooth and agreeably audible, even when you hoof it; and has more than enough poke through the gears to shift the V40's 1,390kg. Fifth and sixth are particularly flexible with meaningful pick-up on the motorway.

It will also take you all the way to 140mph, despatching the 0-62mph sprint in 7.7 seconds. Drive sanely (the legal 70mph calls for a quiet and refined 2,100rpm in 6th gear) and you'll have no trouble bettering our week's average of 40.6mpg. Officially the combined figure is 51.4mpg but then we weren't exactly dawdling — blame the T4's willingness to play…

The V40's an undeniably competent machine, one that's more than a willing partner whenever you have a need to press on. Helpfully, the six-speed manual 'box is an easy-changer (with block changes not a problem) and the electric power steering plays along fluently. Turn-in is good and the helm's accurate for quick progress around the lanes in the country. The driver can, incidentally, set the steering weighting (three levels) to suit.

This new premium Volvo manages a satisfying blend of handling and refined ride comfort that's perfect for most drivers and the UK's deteriorating roads. The front-wheel drive V40's ride is both supple and confidence-inspiringly grippy, as well as balanced at a fast lick: a well-tempered balance that serves up a very enjoyable drive.

Braking is equally impressive — smoothly progressive with superb speed-shedding bite. For the record, we were forced to execute an emergency stop at 60mph and the car behaved impeccably, coming to a stop with not the slightest hint of drama. Drivers specifying the Sport suspension, with its stiffer springs and dampers, will be pleasantly surprised to find that the firmer set-up doesn't harm the comfortable ride.

Now the V40's arrived you don't have to follow the herd and drive a sporty family hatch made in Germany. The V40 is stylish and refined, and you no longer need to be one of the Volvo 'faithful' for this new V40 to push your buttons. Specced with plenty of classy touches, it's nice to drive and just as nice to travel in. Prepare to be impressed. — MotorBar