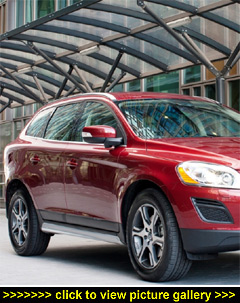 “Volvo is the alternative brand for
customers thinking of changing from
the premium German trio (Audi, BMW
and Mercedes) and the 2012 model
year XC60 SUV/crossover is just the
ticket for those looking to spend less
on their monthly motoring costs...”

THE XC60 SUV/CROSSOVER RANGE, with two- and four-wheel drive versions, is priced from Ł28,300 to Ł41,260, reflecting the vast number of engine and specification combinations available — from four-cylinder 2.0-litre and six-cylinder 3.0-litre petrol engines and 2.0 and 2.4-litre five-cylinder diesels. The 2.0-litre diesel comes with Volvo's lower-CO2 DRIVe specification and two-wheel drive. All the other engines run with all-wheel drive.

Fusing SUV-like ruggedness and practicality with coupe style, the XC60 offers five doors and seating for five adults along with boot/load space of 495 to 1,455 litres. It will also tow 1,600kg (braked).

First seen in 2008, it showed a new design direction for Volvo and featured Volvo's 'world first' new safety technology — City Safety. Volvos have always majored on safety features and they are still a core selling point, together with their new DRIVe innovation.

City Safety helps the driver avoid, or at least mitigate, the most common of all accidents: impacts in low speed city traffic or tailbacks. Surveys show that three-quarters of all reported collisions take place at speeds of up to 19mph. In half of these cases the driver did not brake at all before the collision, most commonly due to some distraction.

City Safe is never distracted: if the XC60's driver is about to drive into the vehicle in front, the car applies the brakes automatically. Even if an accident cannot be avoided, the damage — and any potential injury — will at least be minimised.

And now the XC60 can now be ordered with additional safety features including Pedestrian Detection with Adaptive Cruise Control, Distance Alert, and Queue Assist and Collision Warning with Full Auto Brake.

The fuel- and CO2-saving 2.0-litre DRIVe D3 model with the 160bhp turbodiesel engine with start/stop specification, as reviewed here, comes as front-wheel drive and is fitted with a six-speed manual 'box. Engine tweaks for the 2012 year model sees 160bhp with 295lb ft of torque on tap from just 1,400rpm.

Adding to this, driveability and performance for the 2012 year model has been improved by modifying and making fine adjustments to the variable-geometry turbocharger; and Piezo-electric fuel injectors are employed to improve stages of combustion during start-up and hard acceleration.

Officially, the 2.0-litre DRIVe model delivers 49.6mpg in the Combined Cycle — on test this week and driven over all types of roads and conditions, my test car averaged 38.9mpg. Of course the CO2 emissions are important too, and these are a relatively low 149g/km.

In terms of tax costs, the road tax is just Ł130 a year — brilliant for such a large SUV-styled family or business vehicle; company cars users will pay 22 per cent Benefit-in-Kind tax.

Frugal on fuel it might be, but the XC60 DRIVe is no slowcoach. A bit lazy accelerating from walking pace speeds, it springs into life once the turbo starts blowing and will get to 60mph in 9.7 seconds before going on to a top speed of 124mph.

However, because of the high gearing adopted to improve fuel economy, and despite having five-cylinders and turbocharging, the driver will need to make full use of the gearbox on winding roads. The ride can also be unsettled over poor roads surfaces. That said, while the gearing dulls the low-down 'grunt', at least the fuel and tax savings will make its owner smile.

An excellent and roomy family car with a good, must-have classy image, the XC60's plus points include numerous safety features, comfort and, for such an imposing car, low running costs. But getting the ideal level of equipment can make this version look expensive. — David Miles